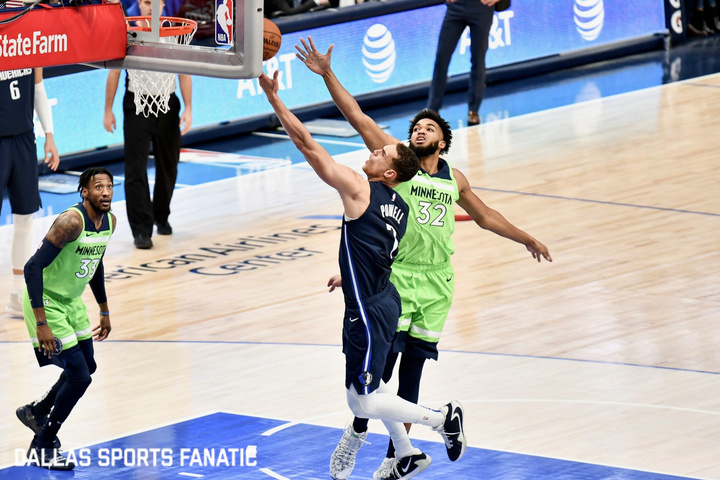 Powell, Brunson spark the Mavs as they hold off Timberwolves

Powell, Brunson spark the Mavs as they hold off Timberwolves

“We all have roles on this team and understand to win on a high level we all have to be stars in those roles.”

Tonight’s game was a dog fight. And not a particularly pretty one to start. A dog fight where you’d need every last one of your teammates to step in when their number was called. And that’s exactly what the Mavericks got tonight.

In a back-and-forth physical game the entire night, the Mavericks ignited for 40 points in the fourth quarter to outlast the Timberwolves 121-114.

Dwight Powell, who left the fourth quarter and did not return with what Carlisle said post game was a left forearm contusion, led the way with 24 points on 9/9 shooting. Coach said X-rays were negative on Powell’s arm.

This game was about the role players. Outside of Powell, Jalen Brunson was huge off the bench, specifically in the fourth quarter, scoring 14 of his 16 points in a meaningful game for him. Maxi Kleber added 12 points and two clutch three pointers in the fourth quarter.

“The game that Brunson had was a difference maker,” Coach said. “We needed to throw some energy and Brunson gave it to us in the second half.”

Luka had a slow night for his standards of late, finishing with 22 points on 8/22 shooting along with 7 rebounds and 6 assists. KP added 19 points and 6 rebounds.

Back to Brunson, who played tonight after the death of a close friend earlier this week. Jalen had “RIP Nathan” on both of his shoes to honor his late friend.

After a sizzling 4th quarter, @jalenbrunson1 talked to our @SkinWade about the memory of a friend was his "guiding spirit."#MFFL pic.twitter.com/FQ7WBfqsMF

With such a deep roster, JB’s minutes haven’t been as consistent as the end of last season but a lot like JJ Barea, he seems to always leave his mark on the game when his number is called.

The other standout tonight was Dwight Powell, who mentioned earlier scored 24 points on a perfect 9/9 from the field, before leaving the game with a left arm contusion.

“He played a massively important role in this game. Look at his stat line. It’s phenomenal,” Carlisle said of Powell’s play. “He was tremendous.”

Tonight marked the fourth straight win for Dallas as they have a few days off until an afternoon matchup against the Pelicans at the AAC on Saturday.