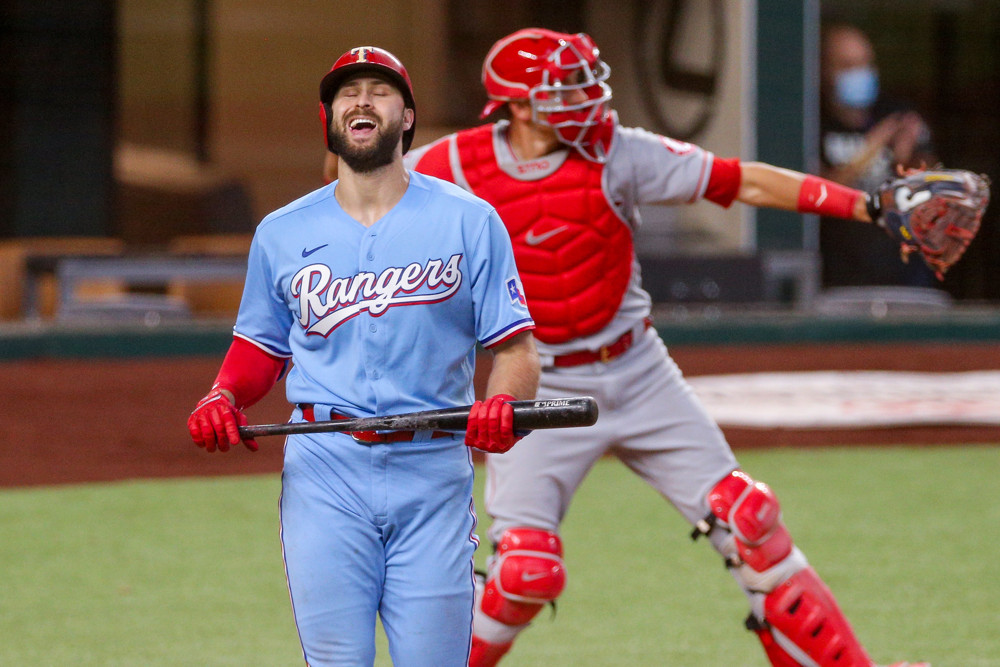 We’ve reached the end of circling the field and looking at the Texas Rangers lineup projections for 2021. The Rangers roster crowds with many outfielders and a lot of choices, especially in left field. On Friday, the club and Joey Gallo avoided arbitration (along with Isiah Kiner-Falefa). Therefore, no contract disputes are being dragged into Spring Training 2021. Let’s look at the final pieces of the squad.

The Rangers may have gotten a diamond in the rough in David Dahl. Texas signed Dahl to a one-year deal after the Rockies let him go. While Dahl spent most of 2020 in center field for Colorado, it’s a no brainer that David’s main anchor is at left field. I see him and Willie Calhoun splitting time in left field and at designated hitter. Dahl is a player I am excited to see after a 2019 All-Star season with the Rockies. Injuries limited Dahl’s 2020 campaign during summer camp and ultimately landed him on the injured list for a month midway through the 2020 season. If Dahl goes back to his 2019 form, we can all thank Joey Gallo for his marketing campaign to bring David to Arlington. “It’s a pretty easy pitch,” Joey said last week when asked about recruiting Dahl (add persuasive to Gallo’s resume).

In 2020 the Rangers tried a few center fielders. The club had Scott Heineman, Nick Solak, Eli White and settled on Leody Taveras (for a good reason). Last season Leody played in 33 of the club’s 60 games and was a gem patrolling center field. Now that Heineman is with the Reds, Solak is likely at second base, and White is still developing, there’s no alternative option other than Dahl.

I understand Leody didn’t get a taste of AAA, but he looked ready for the majors. Did he struggle on the offensive side? Sure, but to be fair, who didn’t (outside of Kiner-Falefa). “This offseason is going to be important for a lot of these guys to kind of make, you know, physical upgrades.” Rangers manager Chris Woodward said at the end of the year. They’re going to be healthier. They’re going to be, you know, energized. My curiosity is who the second option in center field is?

For the first part of the season, the answer to right field is as simple as breathing. It’s the gold glover, Joey Gallo. The question comes later in the year as the trade deadline approaches. The club is still looking at extension options for Joey Gallo, who wants to stay a Ranger. However, the business side may ultimately win out. The start of 2021 is critical for Gallo, who offensively regressed in 2020 after showing improvements in 2019.

This situation is different from a Mike Minor in 2019 or Lance Lynn in 2020 because Gallo could be a long-term piece for any franchise. Chris Young, Jon Daniels, and the Rangers need to decide what their ultimate plans are quickly and if they include Joey Gallo. “I love being here. I love being a Texas Ranger, win, or lose. I feel proud to put ‘Texas’ across my chest every single day I’m out there,” Joey said after the trade deadline in 2020.

For the past four seasons, the Rangers had a primary designated hitter in Shin-Soo Choo. With Choo gone, the Rangers can mix and match the DH role. My best guess is that Willie Calhoun will have the most reps at designated hitter along with Dahl, but Woodward can go with the hot bat if whoever needs a semi day off. I feel like that works into a young team’s advantage rather than having a set individual anchored at that role.

I don’t foresee the Rangers making any monster moves this winter. One other thing to keep in mind is don’t be shocked to see Rougned Odor get a rep or two in the outfield, especially if the injury bug strikes. I will say that there’s a lot of versatility in this Rangers roster, and a dark horse could pop up in Spring Training, like Adolis Garcia.