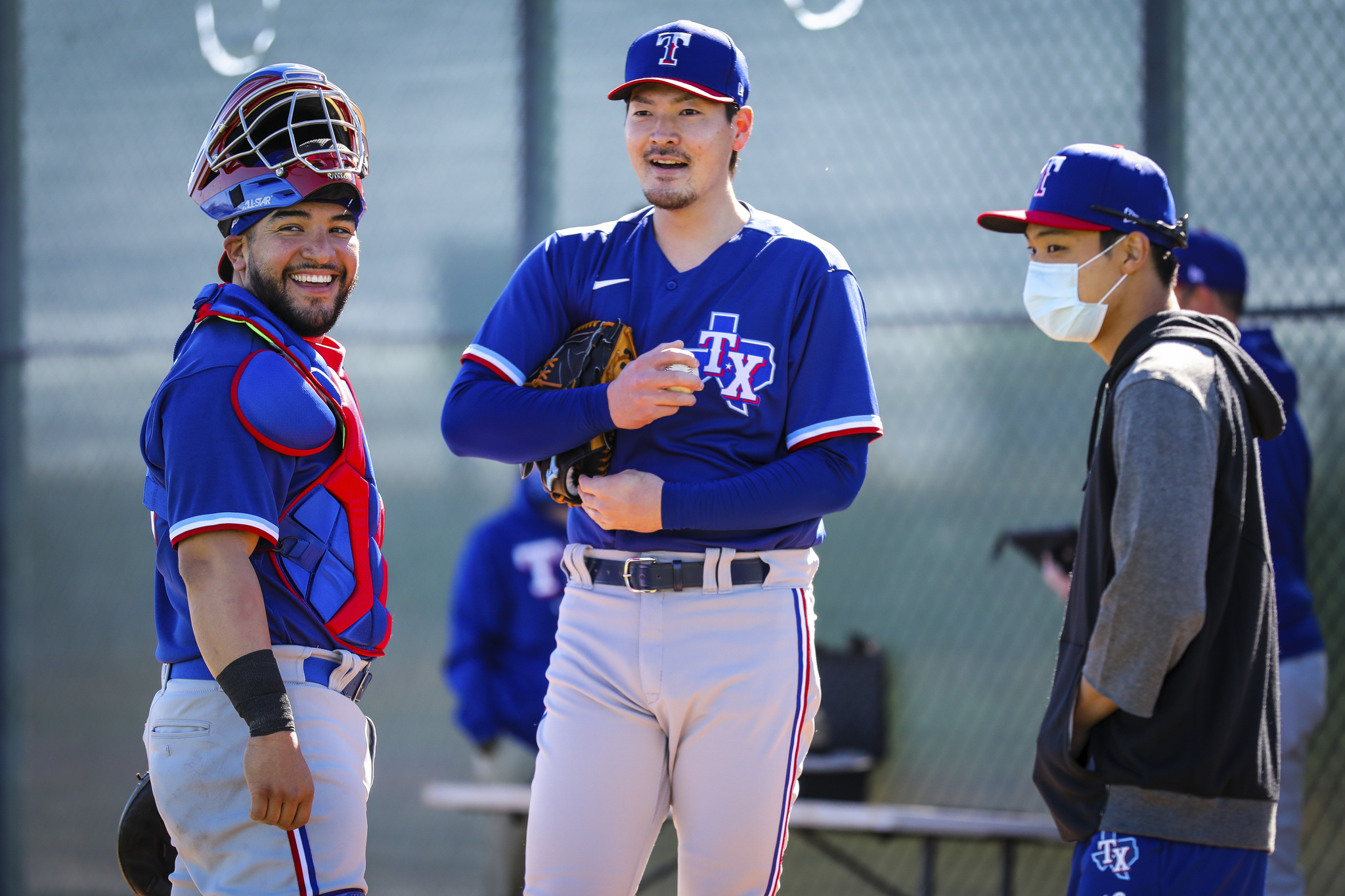 Jose Trevino is finishing up nearly an entire season at the major league level for the first time in his young career. Trevino has become a leader in the organization and cemented himself into the hearts of Texas Rangers’ fans. Trevino will be close to one hundred games played by the end of the season despite missing a month due to injury.

“My first full season, I didn’t know what to expect,” Trevino told me. “I thought I knew what to expect, [but] you never know.” Overall for Jose, it’s been a positive 2021 year from a growth and development standpoint.

“I’ve seen a lot of growth,” Rangers’ manager Chris Woodward told me. “Being able to withstand catching, [his] ability to trust with the pitchers, [and] working on the game planning every day. He’s one of the best if not the best in that regard.” Woodward also mentioned Jose’s improvements on his throws to second base, which weren’t his strong suit. For Trevino himself, his biggest takeaway was the grind of the season and the learning experiences he’s encountering. “Learning, winning or losing, being in the game, being on the bench being around Charlie and Brock, being around Jordan Lyles, Gibby in the beginning, Ian. They’ve been through it,” Jose told me. “You have to have a lot of trust in the people around you. It’s a grind, but you got to love it, and I love it.”

The numbers have gotten better on the offensive side for Trevino over the past month and a half. His on-base percentage is trending upwards. Entering August, Trevino had eight extra-base hits and matched August with eight total extra-base hits in the month alone while keeping his niche as a great framer and leader in the clubhouse. 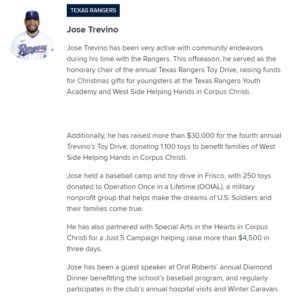 Adjustments and Enhancements in the offseason

Look, every player and human can head into the winter and work on something (Trust me, I will). On Tuesday, Chris Young said it best: “We don’t have a player that is a finished product.” For Trevino, his skipper pointed out a few things, including his swing, his throws to second base, and controlling his mind to stay composed mentally. “With Trevi, continue to work on his swing, sequencing his swing, staying in his legs, being able to use the whole field.”

“There are a lot of things for me. I got a list of them, [and] can’t name them all. But there are some things that I want to clean up for myself,” Trevino told me. Nearly two weeks remain in the 2021 season, and while the stats on paper aren’t sexy, the growth is the key. “I know I’m a major league baseball player, and I know I can do it, so I’ll get better at that,” Jose said. 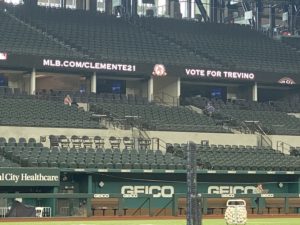 On Tuesday, Jose Trevino earned the honors as the Rangers’ nominee for the Roberto Clemente Award in 2021. “It means the world to me,” Jose Trevino said Tuesday. “We’re a giving family. If someone needs a shirt, you give them a shirt.” When I scroll through Twitter or Instagram, it’s easy to spot a young fan, a dad, or a mom who thank Jose for the gratitude, whether it’s a ball, a bat, or just watching him interact with youngsters. This past offseason, Jose did giveaways on Instagram and does a Trevino Toy Drive with his family every year, and the amount of work put in is immense. “My family is a big part of this. My sisters, Markie, my mom, my aunts, [and] uncles, everybody has pitched in for this Trevino Toy Drive.” Here were some things Trevino did back in December which is a fraction of what he’s done in the community

Since 1974, no Texas Ranger has ever won the Roberto Clemente Award across Major League Baseball. Last season, Shin-Soo Choo was the Rangers’ representative. “[Trevino] represents everything we’re about [and] everything we should be about,” Chris Woodward said. “He’s a natural leader, does everything he can, [and] he’s a competitor on the field.” The leadership quality basks in the eyes of his teammates and higher management around him. “What I see is a guy who is passionate, who has leadership qualities, who gets the best out of himself on a daily basis, and serves others,” General Manager Chris Young told me. “Those are attributes that we love, and we hope to obtain and achieve in all of our players.” Fans can vote for Jose Trevino for the Roberto Clemente award by going here.

Just a kid from South Texas representing my parents, my family, and the people that believed in me. Thank you to all the people that have helped along the way from the Trevino Toy Drives to the off season catching lessons! #DreamBig https://t.co/nvoELFzfjs