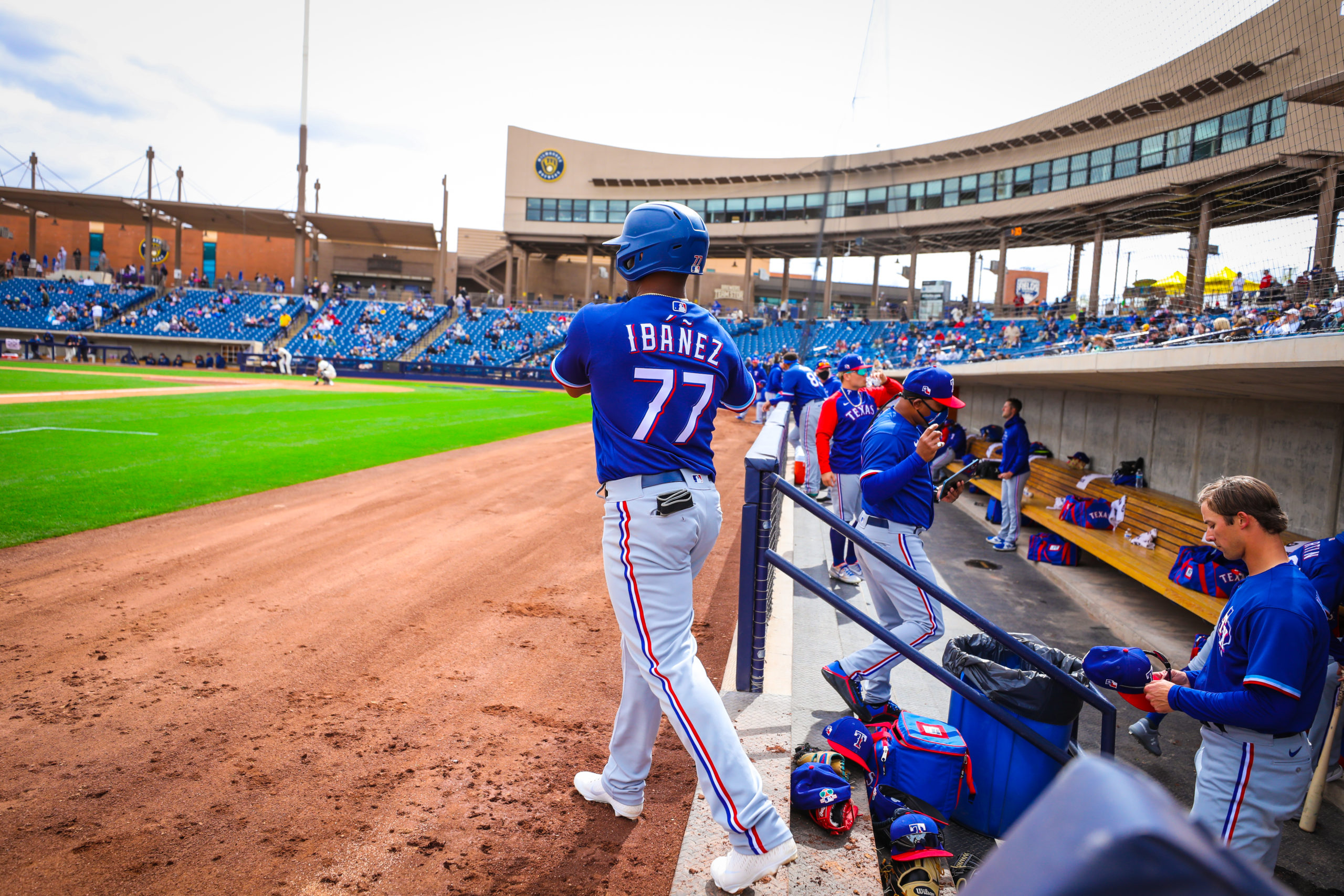 Rangers are getting a look at Curtis Terry, but who plays second base?

Rangers are getting a look at Curtis Terry, but who plays second base?

Rangers buzz filled the air on Thursday night. Curtis Terry left Round Rock’s contest against Reno early, and shared hugs among his AAA teammates. Then, finally, it was time to give the man a shot in the big leagues. The Rangers selected Terry from AAA, officially announced Friday before the game against Houston. We all knew it was a matter of time. The question was, when? Rangers President of baseball operations Jon Daniels hinted these types of moves were on the horizon Monday, and of course, the first name that popped up was Curtis Terry, for a good reason.

“It means a lot to me personally, from my friends back home [and] my family back home, everybody who been on the journey with me,” Curtis Terry said after being asked what the call-up means to him.

Well here are your Rangers moves:

Keeping three catchers was unlikely for the Rangers, especially a team far out in the standings. If the situation was a pennant chase in September and Hicks were on fire, I could see a team keep three catchers to keep that bat in the lineup. However, those are certainly not the circumstances for the Rangers. Jose Trevino returns to the Rangers after missing less than a month with a bruised right forearm. Trevino returns from a rehab stint in Frisco where he reached safely in five of six games. Jose homered and drove in three in his last rehab game in Amarillo. On the other side, John Hicks drew the short straw as the club designated him for assignment. In his ten games with the team, Hicks homered four times, including a multi-homer game and homers in three of his first four games. Unfortunately, Hicks ran into a tough stretch going 1 for his last 15 at-bats with five strikeouts.

The shocking news out of Friday’s list was the demotion of Nick Solak. To say it’s a rough go for Nick in 2021 is an understatement. Since the break, Solak is 2 for 14, and in July, Nick is hitting .163 with two extra-base hits. “[Young players] want results, they know they need results to stay here, they need results to stay in the lineup,” Chris Woodward said before Thursday’s game. “But there’s a simplified process to if I get a good pitch to hit, I’m going to get my “A” swing on it. Nick has been better. His timing has been better.” Woodward liked what he saw from Solak Wednesday, but the rough go for Nick can attribute to the “doing too much at the plate and chasing results funk.”

Meanwhile, who fills in at second base? Well, there are two veteran utility guys in Charlie Culberson and Brock Holt. However, the main focus is Andy Ibáñez. The Rangers are trying to figure out what they have in Ibáñez. Yes, the numbers don’t look kind to Andy since the recall on June 21st, but a great game Thursday showed a lot in the organization. “Four quality at-bats [yesterday], even the bloopers,” Chris Woodward told me. “Especially against the righties since he’s been up. He’s been hammering lefties. [It was] nice to see him have a quality at-bat against a righty.” Ibáñez entered Thursday’s game with three hits all season against right-handed pitching (in 50 at-bats). He hit two bloopers and a shot against three different right-handed pitchers in Thursday’s 7-5 loss to the Tigers. However, a lineout to deep left accounted for the only out Andy recorded.

Ibáñez’s Thursday was great but didn’t sway the vote to keep Andy in the majors. “We already made up our mind a few days earlier,” Woodward told me. “We’re always talking about different rosters moves that we see happening, and Nick, I have been talking about that for a while, not because I feel like he doesn’t deserve to be here, but I feel like he needs a release. He needs to have some freedom to go down and work on some of the things he’s been trying here.”

On the diamond, it’s first base or designated hitter for Nathaniel Lowe and Curtis Terry. If Terry goes off, it may present a problem to keep both Terry, Lowe, and either DH Adolis García or Joey Gallo. “The one I have to make sure I do is continue to give Joey or Adolis DH days, so I don’t want our DH to be clogged up with either Terry or Lowe,” Woodward told me. “If that’s the case, either one is not going to play, or if Curt takes off and Nathaniel is still doing well, then maybe we can look at the situation of maybe Nathaniel playing third base, that could be an option.”

The next question is, who’s next? Or better yet, what other shakeup (outside of the trade deadline) happens? While the season looks lost in the win/loss column, it showcases why players belong in the big leagues. My view is that Curtis Terry is either going to go off in the majors early (like Adolis García) or struggle since the pitching quality is heavily different. Regardless of results, the Rangers are looking to their future immediately.