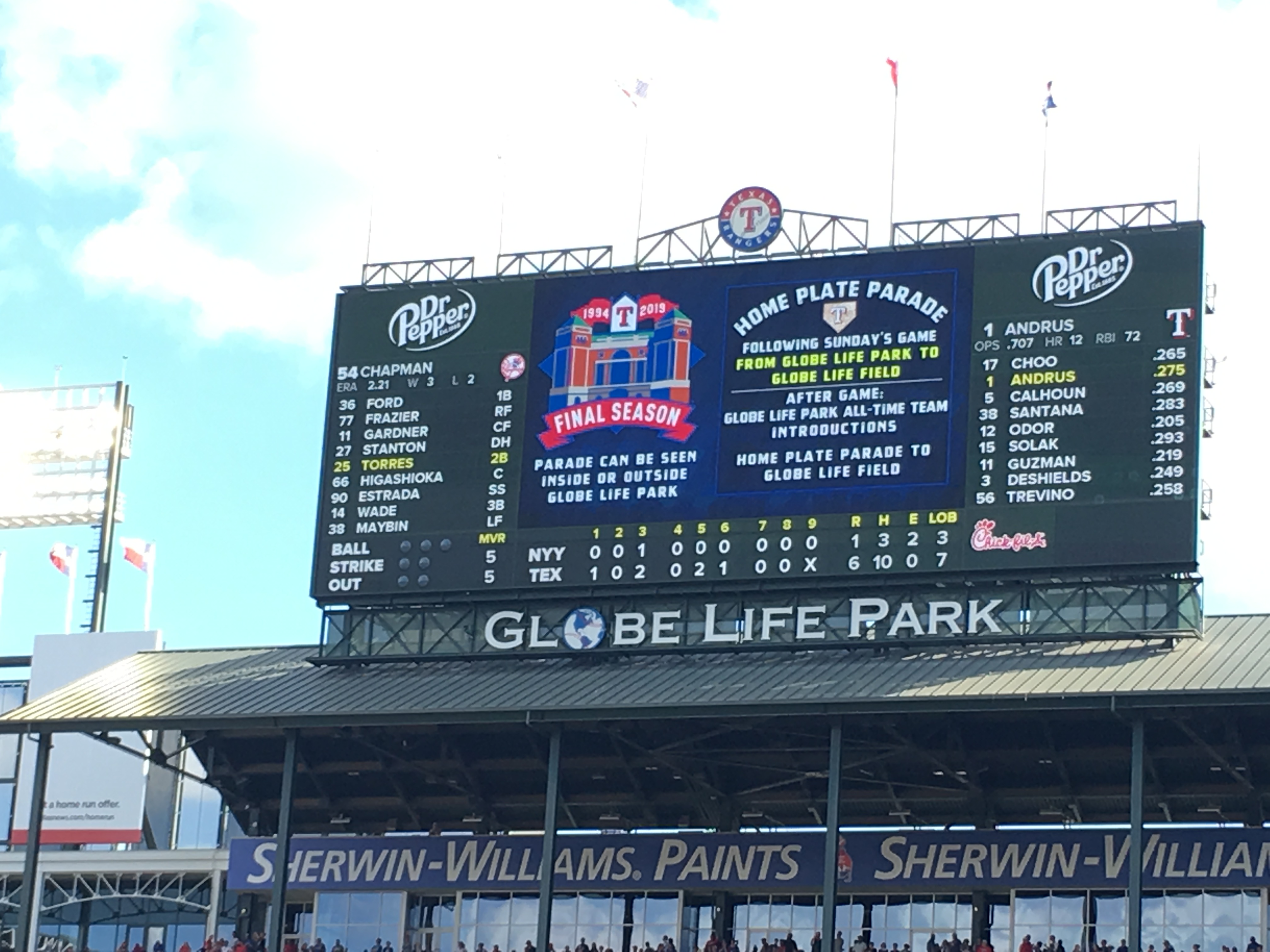 Emotions hit all day today. The drive to the ballpark, walking up to the entrance and even looking out to Center Field. It felt like moving day; like stepping into a new house and saying goodbye to all the memories the past twenty-five years have given you in this ballpark. Sunday afternoon closed the door on Globe Life Park in Arlington for multiple generations of Ranger fans. The beauty of sharing this experience with millions of people is that everyone has their viewpoint, their memory of this ballpark. Some will say the 2010’s ALCS clincher over the Yankees or Kenny Rogers perfect game in the inaugural season of 1994. Whichever memory you choose, whether you’re a Rangers fan or not, there’s one thing we all have in common: We say goodbye to a place the Texas Rangers have called home for twenty-five years. The day started with a first pitch thrown from Nolan Ryan to Kenny Rogers. After that, the Rangers took complete control of the entire day.

You know this is a big deal when even the former PRESIDENT OF THE UNITED STATES is here!

The Rangers sent their workhorse Lance Lynn to close out the season as the Yankees countered with an opener, Chad Greene, and followed with Masahiro Tanaka. The top of the first inning started with a bang, defensively. Delino DeShields went all Rusty Greer and robbed Aaron Judge of a one-out double in the left-center field gap. The Rangers followed their five stolen base night on Saturday with another double steal in the first inning on Sunday. An errant throw by Gary Sanchez at third paved the way for Shin-Soo Choo to score the first Rangers run. After the Yankees answered on an Aaron Judge shot to left field in the third, Texas returned the favor. Another errant throw by the Yankees (Tanaka) scored Choo again, and later Danny Santana drove in his eighty-first run of the season. Coincidentally, Judge’s home run in the third inning marks the last home run at Globe Life Park.

The Rangers added two more in the fifth on a two-run single by Ronald Guzman, in addition to making a fantastic catch on the infield with teammates surrounding him. I talked to Guzzy about his last game at Globe Life Park. “I’m really going to miss this field, obviously the first home for me in the big leagues and pretty good memories.” Guzzy added, “I’m really excited for the new one. It’s going to be sick, and the weather is not going to affect us as much. It’s something everyone talks about and makes an impact when you’re out there playing 162 games. I’m really excited for next year and can’t wait to be there.”

The Condor strikes again!@_ronaldguzman gets a couple RBI and busts this game wide open for the @Rangers!#TogetherWe pic.twitter.com/QCf35ssJlR

In the bottom of the sixth inning, the Rangers added another run on a sacrifice fly by Willie Calhoun, capping off an impressive 2019 campaign. Elvis Andrus stole his thirtieth and thirty-first base on Sunday, giving him a career 302 stolen bases.  Chris Woodward talked after the game about the atmosphere. “It was awesome. We see this house packed the last two nights. It’s fun. That’s the thing I’m going to miss the most when I’m watching playoff games at home. I want all of our players to watch those games and get a feel of what that’s like and to see the towels out and that’s what we play for. We play for the opportunity to play for a World Series.”

Lance Lynn gets a standing ovation and tips his cap to the fans. Lynn done after 101 pitches, Jose LeClerc in. I think Woodward wanted to push Lance to 100 pitches so he'd have the franchise record with 24 straight starts of 100+ pitches. #Rangers #farewellGLP

Meanwhile, Lance Lynn did what Lance Lynn does when he takes the mound. Lynn continued his string of twenty-four straight outings throwing 100+ pitches. He left with one out in the eighth inning, matching Mike Minor with 208.1 innings pitched in 2019. Lance allowed two hits and one run. There’s no question that Lance Lynn and Mike Minor had amazing 2019 campaigns, the only question that raises everyone’s mind, whose was better?

The Rangers close the book on a 78-84 season. While the season’s result wasn’t the most desirable, the overall consensus is that the team loves the direction they are headed and feel they can become competitive in 2020. We’ll see you at new Globe Life Field on Tuesday, March 31st against the Los Angeles Angels.