It was a year of firsts for the Texas Rangers and Major League Baseball. Starting with Globe Life Field’s construction finished to young players making their debuts. The 2020 season ended with the World Champion Los Angeles Dodgers at none other than the Rangers’ Globe Field. While it was strange to witness a champion celebrating on the synthetic turf and not doing it against Texas, The Rangers DJ, Michael Gruber, made outside fans get a taste of home. Starting with fake crowd noise easing into letting the audience dictate the situation, and adding in sounds like the fans were in Dodger Stadium, Truist Field, PETCO Park, and the Trop. I spoke with Grubes about his experiences after a bizarre first full season at Globe Life Field. 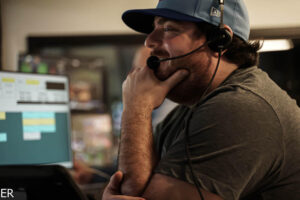 Was there any studying involved in playing in-game sounds or music, or was it based on instinct?

Grubes: When I first started playing music at games with the Stars in 2013, I had a lot to learn. Coming over from running the board at the Ticket, I had a pretty decent knack for timing and feel. But running a game, especially one I wasn’t as familiar with as hockey, took the whole first season and part of the next to get to [the] point of feeling a level of comfort. Even going into last season, my seventh with the Stars, there was still an occasional feeling of “I have no idea what just happened” because hockey isn’t the sport I understand best.

On the other hand, within about an inning of DJ’ing my first baseball game with the RoughRiders in 2019, I felt like I’d been doing it my whole life. Baseball is my favorite sport, and I played (poorly) through high school. So when I trained with Chuck Morgan for eight Rangers games during the last part of the 2019 season, I felt as comfortable as I ever had. This season had multiple layers of weirdness that I never expected or could have planned for, but thankfully I adjusted pretty quickly. I wasn’t perfect by any means, but I trusted my instincts and got through the season about as well as I could have hoped! But of course, having Chuck as a great friend and resource is something I have and will always take advantage of!

It’s weird. 😂 For 18 years, I’ve just been playing fart drops or fun music. I’m not doing anything important! But I also understand how special the Ticket, the Stars, and the Rangers are to people because I’m a fan of all of them. So I get it, but I also feel weird about it! https://t.co/UAABST25dy

What was the most challenging thing in working the NLDS, NLCS, and World Series?

Grubes: Adjusting to having fans back in the building! Doing 35 preseason, regular season, and NLDS games without fans got me into a different mindset where I was pretending to be the crowd reacting to the music and prompts I was playing. With the NLCS and World Series having fans, I was getting to play off of how the crowd was feeling rather than being my own audience! But that is not a complaint at all. It’s been incredible to have real live fans reacting to every little thing happening on the field and in the stands!

What is the feeling like to work a “neutral site” World Series?

Grubes: Weird! But I have to say Dodgers fans have traveled extremely well, and with them being the home team in all three series, I’ve gotten to “be” Dieter Rhule and DJ Severe the most! But working with the Padres (and my great friend DJ EJ), the Braves (and their awesome crew, especially organist Matthew Kaminski), and Rays (and their great DJ MC White) has been a pleasure. Trying to get into each of their mindsets has been an awesome challenge and will only make me better for future Rangers games!

How loud do you think this ballpark will be with a full crowd considering the noise made with 25% capacity?

Grubes: I’ve been telling people that it will reach “Dallas Stars’ 99-00 Stanley Cup runs at Reunion Arena” loud! I can’t put into words how loud the place is at 25% capacity other than to say my ears have been ringing after every game!

And just like that, Cody Bellinger gives the #Dodgers the lead in the 7th. #NLCS pic.twitter.com/zZJsWJYTTN

What is the best feature of Globe Life Field?

Grubes: The audio booth! 😉 But seriously, I love GLF more than I honestly ever expected to. The seats are set up more like an arena, so fans are on top of the action more than any other ballpark I’m aware of. You can walk around the concourse and watch the game because the sightlines are wide open, and concessions are set up towards the back of the park rather than the field.

There’s a ton of Rangers artifacts throughout the years around the park, and Chuck Morgan’s booth is the coolest thing any ballpark employee could have ever have; his memorabilia outside the booth is one of a kind! Like many Rangers fans, Globe Life Park is where I grew up as a baseball fan and have so many fun memories of attending games with my family and friends. It’s still a bit weird that it’s no longer the Rangers home and “The Temple” will always be my first love, but Globe Life Field is incredible, and it’s been really fun to see so many people change their opinions as they watch more games on TV or in person.

How does it feel to be the first DJ to work Globe Life Field and carve out your identity/niche?

Grubes: Well, I don’t know that I’ve done that. Chuck Morgan has built an incredible presentation for the last 38 years, and I have no intention of compromising that. The great thing about baseball is that it presents more opportunities to hear bigger portions of songs than any sport, at least in my experience. Hockey is mostly 30-45 second snippets of songs before faceoffs, basketball is mostly loops of beats and maybe a minute of a track on a timeout before an on-court “bit.” With longer stretches of time before games and between innings, songs can be played in full, and I can jump between multiple genres.

Chuck loves Motown, so I always play a handful of those tracks for him. I love 90s rock and hip hop so [that] I can indulge myself. Our grounds crew loves Steely Dan. Eric Nadel loves the music played on radio station KXT. Fans might request a newer pop song or a song they remember Chuck playing at Arlington Stadium in the 80s, Tropical Latin and newer rap/R&B tracks are big with the players…I could go on and on. But the point is I’m not looking to carve out my niche per se. Chuck’s only ask of me when I took over the music was to make sure I made a Rangers game feel like a Rangers game.

I’ve attended and watched enough games to know what he means, and I take that very seriously! He cherished our memories at Arlington Stadium and Globe Life Park, so it’s only right that I do the same for fans attending games at Globe Life Field! And hopefully, I can do it for the next 38 years or so. 🙂 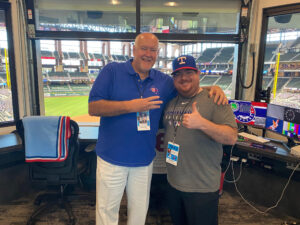 Let me be clear here; Grubes is not a rental. He’s the main man handling the audio at Globe Life Field. To add a Grubes’ touch to the new park is like adding a sprinkle of spice to make a food delectable, in this case, an atmosphere.

That was the most hectic, stressful, and fun three weeks I’ve ever experienced. I’m so thankful for the opportunity @TEXPAMAN and the @Rangers gave me and our crew led by @CLDHeavy is incredible! Here’s to a hopefully more normal 2021! But for now we sleep. 😴🤪 https://t.co/lYK44G8P3Z