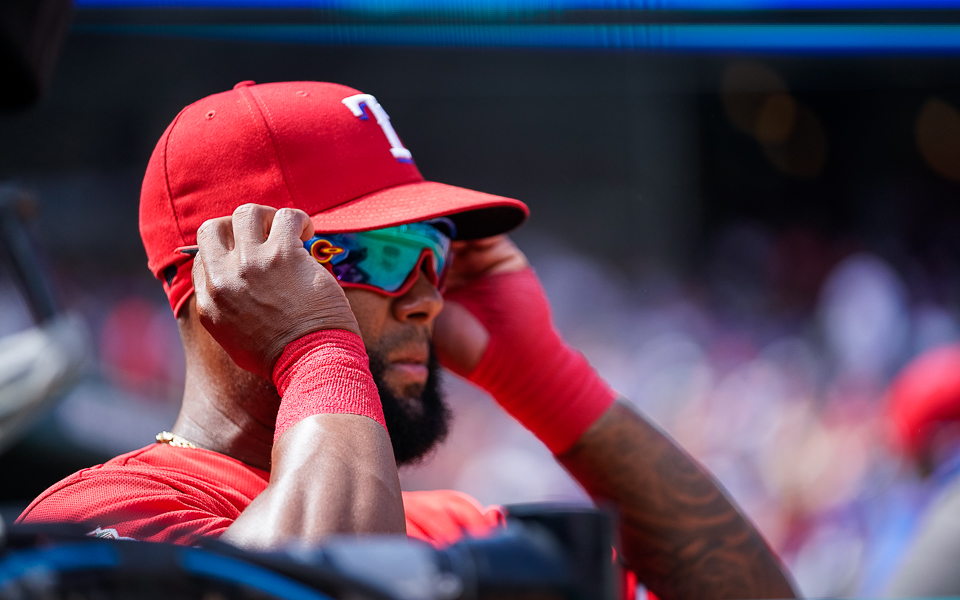 The Rangers returned home to finish a span of twenty-one games in twenty days (club went 12-9). The club welcomed a couple of American League Central teams in the Cleveland Indians and the Chicago White Sox. Both teams are in the thick of the American League wild card stretch. Here’s how it went down.

Player of the Game: Lance Lynn shut down a mighty Cleveland Indians offense that came off a series sweep in Detroit. Lynn pitched six innings, gave up six hits, one run and struck out nine with no walks.

Player of the Game: Despite a hit-less night, Ronald Guzman did have two walks and built on some momentum from Monday’s game. Prior to the homestand, Guzman was hitless in his last sixteen at-bats.

Prior to the game, I asked Chris Woodward about Guzzy’s struggles on the backend of the road trip. “He was getting frustrated, I could see some frustration. I’m really proud of the work he’s doing in the video room and he’s preparing for the at-bats, but mechanically when things are out of whack it doesn’t matter how good of a game plan you have, you’re going to get beat. I told him it’s okay, it’s okay not to be perfect every day. You have to find a way to game plan when you’re operating at forty percent. You can still find a way to be successful or try to find a way to be successful.”

Stat: The Indians hit back-to-back-to-back home runs on just five pitches from Drew Smyly in the seventh inning on Tuesday. It was the first time Cleveland hit three straight home runs since 2004, allowed by one time Ranger Travis Blackley.

Player of the Game: Jesse Chavez saved a lot of grief in the bullpen. In for relief for the struggling Joe Palumbo, Chavez went five strong innings only allowing one run, no walks, and four hits. Despite the lopsided loss, the Rangers used only three pitchers on Wednesday, thanks to Chavez.

Jesse Chavez has been great over the last couple months and tossed 5 more solid innings out of the pen for the @Rangers against the Indians#TogetherWe pic.twitter.com/ncIkyDRJsK

Stat: The Indians hit three more home runs on Wednesday. After Wednesday’s contest, the Rangers pitching staff allowed nineteen home runs in their last seven games. After the Rangers loss on Tuesday, I asked manager Chris Woodward if that presents a red flag for the staff. “That’s one of the things we talk about as a staff, is limiting slug (slugging percentage). That’s concerning when you start giving up homers because that’s the easiest way to create runs.”

Player of the Game: The Rangers needed an innings eater like Mike Minor to deliver and on Thursday, and the club got what they wanted. Minor went eight strong innings, allowing only one run and three hits. Mike did walk three batters and strike out four Cleveland Indians. Thursday was the fourth time in 2019 that Minor struck out less than five hitters. It was the lowest strikeout to inning ratio start this season for Mike.

Stat: Elvis Andrus continued owning the Cleveland Indians. With his two for four performance, Elvis boosted to a career .368 hitter against the Indians. I asked Elvis after the game about his pure domination in his career against the Indians. “I feel good every time I play against the Indians. Feels great for some reason, my swing gets back on track and no matter who’s pitching I go out there and try to compete and do good things. Knowing you have that good track [record] on top of you, it makes you feel a lot better.”

Player of the Game: Shin-Soo Choo had three knocks on Friday.  This season, at home, Choo is hitting .307 with an OPS of .932. Choo’s first hit came to start the Rangers first inning. His dominance continued to begin ballgames, hitting .444 (24 for 54).

Guys, Nomar Mazara hit a ball to the moon today.

Measured at 505 Feet, it's the longest home run ever at the Ranger's Ballpark in the Statcast Era. (via @Rangers) pic.twitter.com/VF6fsWgQlO

Player of the Game: Nomar Mazara continued his tear of the baseball with two homers. Mazara’s first home run landed in the second deck, though not as far as Friday’s shot. His second went to the edge of the Rangers bullpen. Between Friday and Saturday’s games, Mazara hit a combined 1,305 feet in home runs (three total). In addition, Maz made a fantastic play in right field retiring Tim Anderson to end the third.

Player of the Game: Adrian Sampson bounced back after two undesirable starts. On Sunday, Sampson pitched seven innings, allowed seven hits, one run, four strikeouts, and one walk. This start was the third start in 2019 that Sampson pitched seven or more innings. Sunday was the fifth start (including games with an opener) that Adrian allowed one or no runs.

Two runners in scoring position. Full count. Clinging to a one-run lead. There's no better time to be clutch.

No problem at all for @kelleytime27 as he strikes out Tim Anderson to wrap up the top half of the 8th 😎@Rangers | #TogetherWe pic.twitter.com/bAAo0w1wM4

Here’s what is upcoming for the Rangers this week as the club hits the road.

The Rangers head to Detroit and square up against the reeling Tigers. Since April 23rd, the Tigers are 14-37. With 26 total wins on the season, Detroit’s closer Shane Green has 21 saves. In fact, 23 of the 26 wins by the Tigers this season were by three runs or less. Joey Gallo schedules to come back on Tuesday.

Chris Woodward said pregame on Saturday that he is feeling good physically and ready to go in the outfield. “He feels fine, physically he feels good. He’s been swinging no problems. He’s been playing outfield. We thought originally there might be some limitations in the outfield because that’s how he hurt it — originally it wasn’t even swinging — but I don’t think there’s going to be any limitations, as far as the way he feels right now, as long as there’s no set back, he should be good to go.” Woodward said that Gallo may DH for one game, but after that, he’ll be back in the outfield.

The Rangers get their first look at the Tampa Bay Rays, a club that nearly missed the playoffs last season. Texas will have their hands full offensively against the best-ranked pitching staff in the American League and the second-best in baseball. What works in the Rangers favor is that the Rays’ staff pitches better away from the Trop than at home (3.33 ERA at home, 3.13 ERA on the road). One thing fans will see in this series is an abundance of strikeouts. The Rangers are third in baseball in strikeouts, and the Rays are fifth in baseball.

The Rangers continue to insert themselves in the thick of the race for the second wild card spot. Don’t forget starting Wednesday, vote Joey Gallo and Hunter Pence.