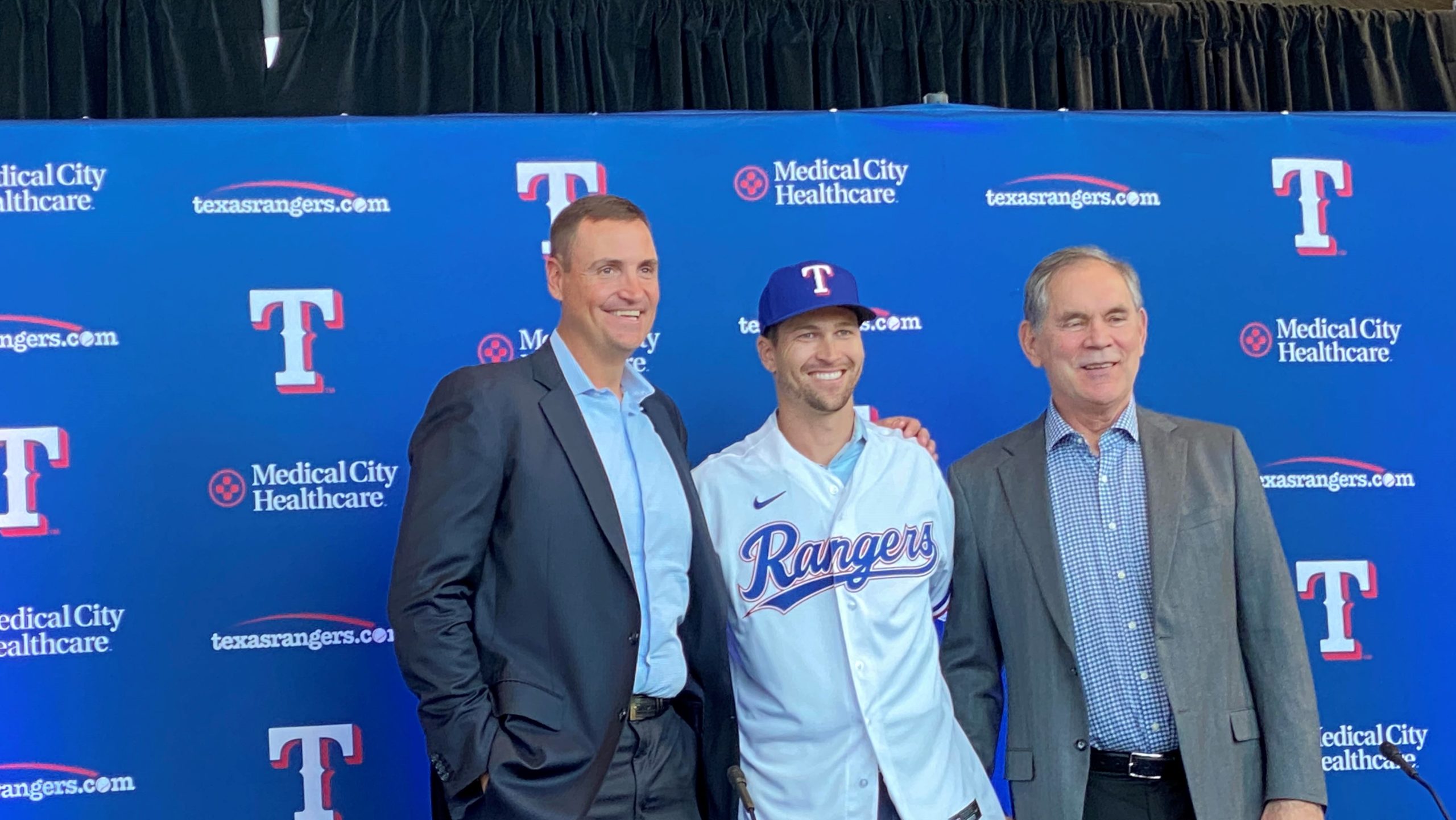 Rangers end the week with a veteran starting rotation in place

Rangers end the week with a veteran starting rotation in place

We’ve arrived in the middle days of December with Rangers fans eager for March to get here. In the previous week, Texas has introduced their new ace, Jacob deGrom, and days after the signing, they went and got Andrew Heaney to fortify the starting rotation. “We’ve addressed several of our needs, things we discussed coming into the offseason that were our main goals for us, specifically starting pitching,” Rangers General Manager Chris Young said on Thursday. “We feel good about where we are in terms of our minor league system and player development and the players we have coming in time, but we’re trying to win at the big league level.”

Hey Jacob deGrom, you’re going to the Texas Rangers; what are you going to do now? “Go to Disney World!” No, it didn’t happen exactly like that, but you could say that deGrom and his family celebrated by going to Disney World. According to Jacob, he and his family booked the “Mickey’s Very Merry Christmas,” which sold out for the rest of the year. They had tickets for that exact Friday deGrom signed with the Rangers.

“It felt like it was the right fit,” deGrom said Thursday. “You look at teams during the year, and you see the directions these teams are going. With the signings of Marcus [Semien] and Corey [Seager] and the moves, they are making as far as taking the time to make something great here and continue winning baseball games and making that not just a one-year thing but a goal for years in and out. We’re excited, and that’s why we chose Texas.” deGrom said his body feels fresh after the stress fracture in his shoulder limited his 2022 season. The goal is thirty starts for deGrom with a clean Spring Training.

As for the excitement, it’s all over the place. Rangers manager Bruce Bochy shared his eagerness with Chris Young and, of course, all of Rangers nation online. deGrom will learn from Rangers pitching coach Mike Maddux who he hadn’t had too many interactions with but shared his excitement about working with Mike and the Rangers staff. “Anytime you can learn from somebody who’s been in the game that long it’s going to be a treat. [I’m] looking forward to this opportunity,” Jacob told me.

Probably the biggest piece of information I learned from today's press conference:

The Rangers added Andrew Heaney to a two-year contract which became official on Friday. Heaney spent last season with the Dodgers in limited work (72.2 innings). Before, he spent the bulk of his career with the Angels (seven years). The Yankees acquired Heaney at the trade deadline in 2021 from the Angels, but the results didn’t pan out for Andrew in New York. So now the Rangers bring in Heaney in the hopes of steering another veteran pitcher into success (i.e., Lance Lynn, Mike Minor, Kyle Gibson, and others).

The key for Andrew Heaney is that he misses bats. Last season he posted a 16.8% swing and miss, which led all MLB for pitchers who pitched 70 innings or more. “Andrew is an important addition to the staff as we continue improving our roster for the 2023 season,” Chris Young said. “He was one of the most effective pitchers in the Majors over the final two months last season, and we look forward to working with Andrew on carrying that momentum into next year.” The Rangers aren’t taking a washed-up pitcher looking to get his feet on the ground (like the pitchers I mentioned earlier). Still, if Texas can pull out Heaney’s full potential, it’s a deadly rotation, especially if Jon Gray is at his full potential.

The Rangers have formally announced the signing of LHP Andrew Heaney to a two-year contract covering the 2023-24 seasons. To make room for Heaney on the 40-man roster, RHP A.J. Alexy has been designated for assignment. pic.twitter.com/3xTk4f0COB

Chris Young said on Thursday that the club is in an assessment period, so I wouldn’t suspect much action in the next few weeks. That said, things can change, and the club could target outfield help right now. There have been links to guys like Michael Conforto, Michael Brantley, Andrew Benintendi, and even Rangers fan favorite Joey Gallo. That said, nothing is imminent at the moment, but I would expect the rumor mill to keep turning and featuring the Rangers as we head into the new year. For the rotation, however, it looks set with the solid pieces of deGrom, Martín Pérez, Gray, Heaney, and Odorizzi (with Glenn Otto, Dane Dunning, and Cole Ragans vying for a spot) despite Young stating the search is not quite over.

All of this equates to one thing, speaking of a winning record and playing in mid to late October next year. “That’s our full expectation, not just a winning record, but we expect to push for a spot in the playoffs,” Chris Young said. So we’re nearly two months until Pitchers and Catchers report to Arizona and Florida, hopefully when the Disney Magic begins.