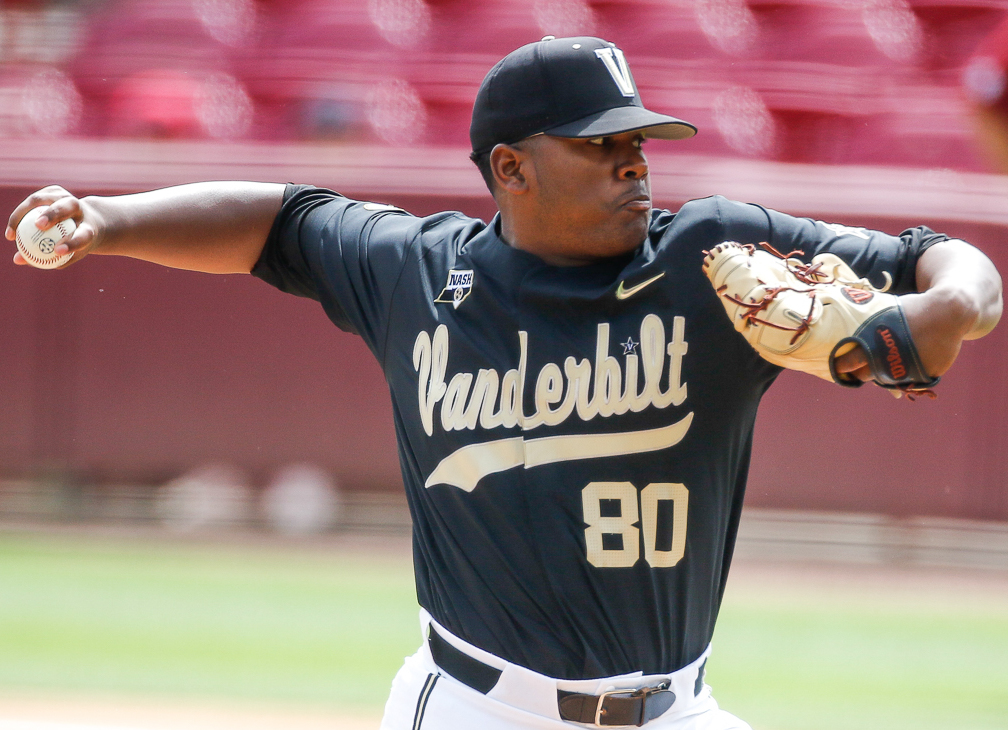 Let’s face it, Rangers fans- at this point in the season, the 2021 season has been a tough watch.

The team currently sits fifth in the American League West, riding the heels of a seven-game losing streak. Outside of the stellar individual performances of Adolis Garcia, Ian Kennedy, Isiah Kiner-Falefa and Kyle Gibson, there aren’t many reasons to be excited about the on-field product.

But not all hope is lost.

It’s a particularly good year to have a high draft pick, because this year’s field is loaded with elite talent at the high school and college levels. Most mock drafts currently have Dallas Jesuit shortstop Jordan Lawlar going No. 1 overall to Pittsburgh- but there are still several directions a struggling Pirates franchise could go.

But at number two for Texas? There’s two clear frontrunners.

Vanderbilt’s Kumar Rocker and Jack Leiter form a one-two punch at the top of the Commodores’ rotation the likes college baseball has never seen. Fabled as the best two prospects in the draft for years, it’s a massive stroke of luck that the Rangers have a chance to change the course of the fledgling franchise.

Rocker, 21, was named the College World Series most outstanding player after a 4-0 record with a 0.96 ERA in the postseason Vanderbilt topped Michigan in the 2019 final- the last one played due to COVID-19 wiping out the event last year.

His imposing 6-foot-5, 145 pound frame and overpowering fastball have blown away the college baseball universe- including the Southeastern Conference, widely considered the class of Division I- for years. Where he got that size is no mystery- His father, Tracy, often shown at Kumar’s starts, and played as an offensive lineman at Auburn in the 80’s, before a four-year NFL career.

This was never more on display than when Rocker threw a 19-strikeout no-hitter against Duke in the 2019 Nashville Super Regional- the first such performance since the tournament expanded in the late 1990’s.

Rocker started Vanderbilt’s 13-inning win over Arizona in its CWS opener Friday- allowing five earned runs over 5.2 innings pitche. The shaky performance doesn’t take away from a sparkling 13-3 record with a 2.58 ERA and 162-36 strikeout-to-walk ratio.

Leiter, on the other hand, has burst onto the scene in 2021. The son of former major leaguer Al Leiter, who won 162 games over a 19-year career, Jack came onto MLB scout’s radar as a high schooler in New Jersey. A lofty demand over a signing bonus pushed him all the way back to a 20th round pick by the New York Yankees in 2019. Obviously, no agreement was reached, and Leiter took to dominating the NCAA stage.

Leiter also boasts a no-hitter to his credit- his came in his first SEC start against powerhouse South Carolina in Nashville. He walked the first batter, but set down 27 Gamecocks in a row after that point on the way to instantly becoming a household name.

Both pitchers come from the same school- an institution that has sent MLB all-stars Sonny Gray, Mike Minor, and David Price in recent years- but the similarities end there.

Despite being listed as four inches shorter than Rocker, Leiter actually has a fastball that is described by scouts as “plus-plus with rising action.” In that no-hitter against South Carolina, Leiter recorded all 16 stirkeouts with the pitch.

Rocker largely features a three-pitch mix with a slider, changeup and fastball topping out at 97 miles per hour. It’s a lethal combination for college hitters- and fun to watch for fans.

Both players are also lauded for their intangibles- Leiter for his cool demeanor and patent professionalism, and Rocker for his off-the-charts energy. Both are described as leaders within the Vanderbilt clubhouse.

The combination of what both players have done in college, their pitching stuff and off-the-field prowess all show a potential of a franchise player- something Texas desperately needs. The Rangers would be well-served to draft either player. For a team currently boasting one of the least talented rotations in baseball, and limited depth behind them in the farm system.

Leiter is set to start Vanderbilt’s second game against upstart North Carolina State (6:00 Monday on ESPN). in its second game in Omaha. The national stage offers Rangers fans a chance to familiarize with both players, and maybe more importantly, a window of hope into what the future could bring.