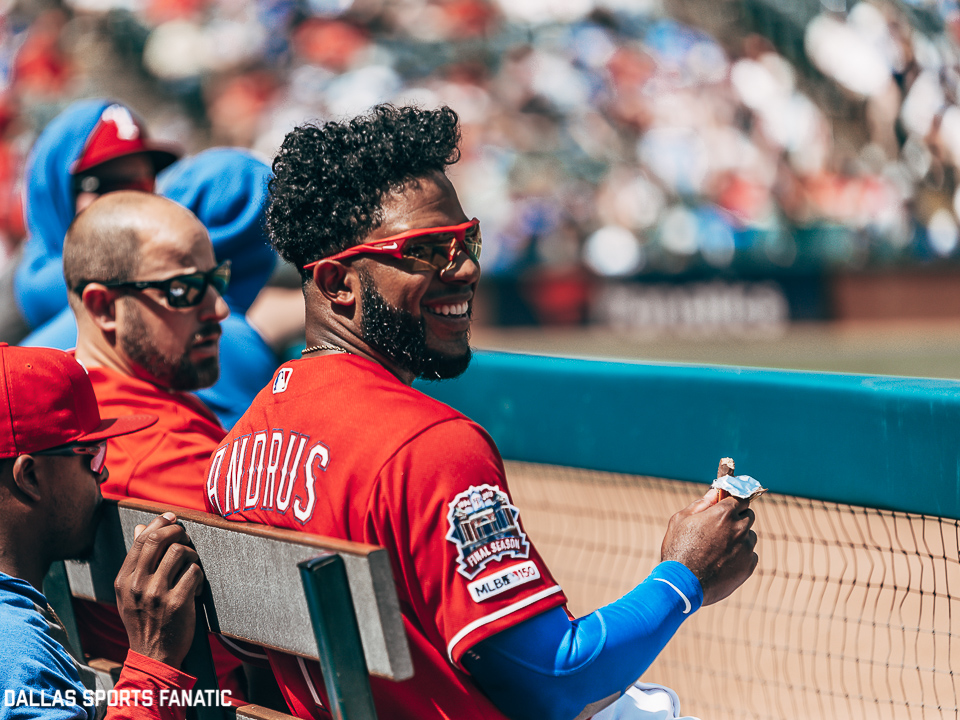 Player of the Game: Asdrubal Cabrera went three for five with a two-run double in what was a six-run bottom of the ninth inning. Cabby scored on the Logan Forsythe double in the ninth.

Crazy Stat of the Game: Orioles starter Dylan Bundy kept Elvis Andrus to an 0 for 2 with a sacrifice fly. Bundy’s dominance against three-hole hitters continued Tuesday.

Found this very interesting – Dylan Bundy holds 3 hole hitters to a .084 batting average (4th lowest in MLB). Rangers 3rd hitter is Elvis Andrus. Elvis is a career .260 hitter against Baltimore and is hitting .315 this season when batting third. #TogetherWe #Birdland

Player of the Game: Despite the blown save, the Rangers bullpen was stellar. The pen combined to go 6.1 innings, allowing one hit (the Reggie Martin solo home run in the ninth), one walk and struck out two Orioles.

Crazy Stat of the Game: On Wednesday Delino DeShields racked up his third career four-hit game. It was the first against an AL team. The previous two four-hit games came against the Phillies on May 17, 2017, and July 21, 2015, at the Rockies.

On Tuesday I asked Chris Woodward about the change in Delino since the recall due to the Joey Gallo injury. “I felt like his swings were more efficient and more consistent. Every strike I felt like he swung at he was on time, his swing path was good, everything mechanically was good.” Woodward also added, “He looks so much better in my opinion. [The] swing has so much more behind it, using his legs better. If he can keep that, maintain that balance, he’ll be a threat.”

Player of the Game: Ronald Guzman picked up a couple of hits on Thursday, including an RBI double in the second inning. This week, Guzman made a couple of incredible stretches at first base.

Crazy stat of the Game:

Player of the Game: Lance Lynn redeemed himself after a struggling start in April in Oakland. Lynn went six innings, allowed six hits, two runs, a walk, and struck out eight A’s.

Crazy Stat of the Game: Hunter Pence belted his thirteenth home run on Friday, and his twenty-fourth extra-base hit. In 2019, Pence has forty-eight base hits total.

Player of the Game: Tim Federowicz had a massive Rangers debut Saturday afternoon. He picked up a pair of hits and a walk, including a three-run home run to break the game open.

Crazy Stat of the Game: The Rangers reached a double-digit run total for the 12th time this season. Six of those double-digit run games have come in the daytime. Saturday afternoon was the 21st day game of the season; they’ve played 41-night games.

Player of the Game: On a night honoring Adrian Beltre, it was another Adrian that controlled the spotlight on the diamond Saturday night. Adrian Sampson threw his first complete game shutout. Sampson gave up four hits, one run (on the Mark Cahna home run), one walk, and seven strikeouts.

After game two, I asked Ronald Guzman how the club adapts to the style of play with their oppositions. I referenced game one’s slugfest and game two’s pitching duel. “We put on good at-bats and keep trying to score 12 runs, 15 runs every single game. Not all the time it’s going to happen like that.” Guzzy added, “In the first game we went off, and this one we put really good at-bats and the pitcher was executing his own pitches.”

Player of the Game: Rougned Odor looked phenomenal on Sunday. In addition to stealing home in the eighth inning, Rougie went three for four with three runs driven in and a clutch ninth inning walk. It was the second steal of home this season, both came against the Athletics. Elvis Andrus stole home on April 14th.

Crazy Stat of the Game: The Rangers snapped their six game Sunday home winning streak on June 9th. The last home loss on a Sunday came on August 5th, 2018 in a 9-6 loss to the Orioles.

Key to series: Like the Rangers, the Red Sox played a Saturday doubleheader against the Tampa Bay Rays, a makeup of the April 26th postponed game. The Red Sox send out Chris Sale for the first game of a four-game series. Statistically, the Rangers and Red Sox match up evenly. Both Boston and Texas rank in the top ten in offense and rank in the middle of MLB in both their pitching staffs. Last season, the Rangers suffered a sweep on the road in Fenway to the World Champion Red Sox. It’ll be a small revenge series for guys like Chris Woodward, Luis Ortiz, and Logan Forsythe, avenging a 2018 World Series loss to the Red Sox as they were members of the Los Angeles Dodgers last fall.

Key to series: The Rangers visit Cincinnati for the first time since a brief two-game series in 2016. Lost in a hitters park, the Reds rank fourth in MLB in ERA (3.66) led by their All-Star ace, Luis Castillo. The Reds pitching staff is fourth in MLB in strikeouts and allowed the second-fewest home runs. It’ll be a test for a high power Rangers offense and an offense prone to punching out.

This week marks the first real East coast trip the Rangers have experienced. Previous to this upcoming week, the Rangers only played two games on the eastern time zone (May 7 and May 8 vs. Pittsburgh). Therefore, it’ll be dinner and baseball for fans this week, and a lot of red.