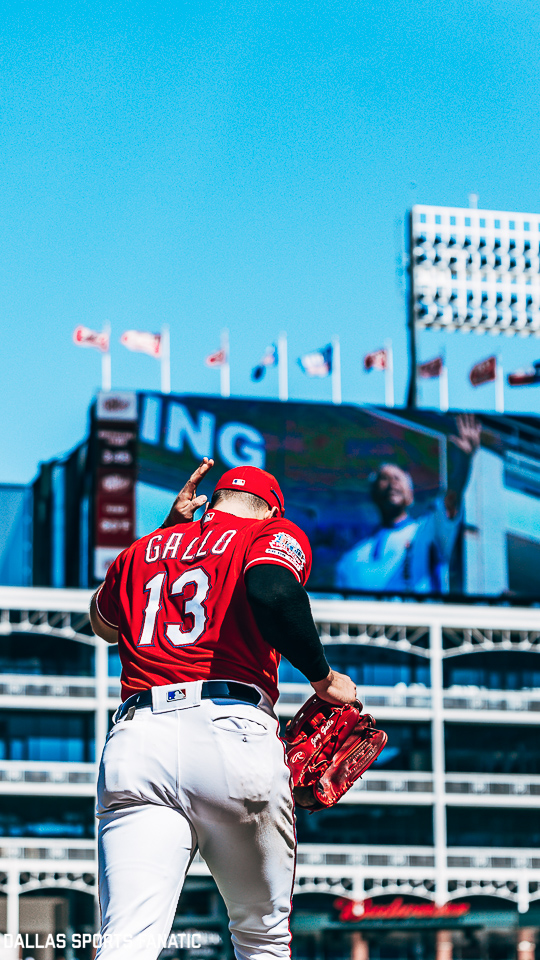 Rangers joyous to start June with a win over the Royals

Rangers joyous to start June with a win over the Royals

The Rangers squared off on a Saturday midday matinee against their Spring Training counterparts, the Kansas City Royals. The Rangers got their second look against the La Grange, Texas native, Homer Bailey. Rangers sent Lance Lynn to the mound for his 12th start of 2019.

Woodward talked before the game about Lance’s workhorse mentality and his ability to deviate away from his fastball, an aspect most pitchers don’t follow. Therefore, in his career, Lance Lynn is more difficult to face as the game progresses. I asked Chris Woodward if his approach translates to those results. “The more weapons you have, the more ability you have to change your game plan, or notice something different or just expose them with the same thing..” Woodward said. There was a comparison to the same approach as Astros ace, Justin Verlander.

The first three and a half innings Lynn and Bailey dominated both hitters. The Rangers produced a crooked number in the bottom of the fourth. It started with a single from Hunter Pence that looked like Royals first baseman Ryan O’Hearn had a chance at. After the single, Joey Gallo launched his 17th big fly to right center. The Rangers stormed with a single, two doubles, and a sacrifice fly (not in that order) in four of their next five at-bats. Homer Bailey was unable to get out of the fourth inning. Therefore after the Shin-Soo Choo double, Ned Yost pulled Homer Bailey.

The Royals added a run in the top of the fifth on a Martin Maldonado double to left. The Rangers countered with an Elvis Andrus sacrifice fly, scoring Jeff Mathis. The Royals got that run back on a Cam Gallagher double. Gallagher replaced Martin Maldonado who left the game for precautionary purposes. In the bottom of the eighth, Nomar Mazara added to the mix with a two-out RBI single, scoring Choo.

It was not all glorious, Gallo left Saturday’s game with an apparent oblique issue and was replaced after the check swing in the bottom of the fifth. According to the Rangers,  it started acting up after the Cheslor Cuthbert single in the top of the inning. Chris Woodward stated postgame that Joey Gallo will get a MRI.

Just re watched the Cuthbert single in the top of the fifth that folks are pointing too that triggered the strain, and it looked like Gallo clutched on that throw but since there was no threat for Soler to go to third, it looked nonchalant as normal.

Despite the solid outing from Lance Lynn, he was quick to critique himself after the game. “I was upset at the end of the game because I made mistakes.” Lance said in reference to the seventh inning. “I wasn’t happy at the end.” Lynn pitched six plus innings, allowed six hits, two runs, struck out seven, and did not walk a batter. Saturday was the first outing by Lance Lynn since his first as a Ranger (March 31 against the Cubs) in which he did not walk a batter.

Lance Lynn was as quick as ever during his postgame interview following another win for the @Rangers.#TogetherWe pic.twitter.com/jlcEikkZRX

An interesting note is the continuation of peskiness of the Royals for fouling pitches off. However, the approach hasn’t translated to runs for Kansas City. In this series so far, the Royals have hit 101 foul balls. In the three game series in Kansas City two weeks ago, the Royals hit 76 foul balls. I asked Chris Woodward before the game if it’s the Rangers pitchers unable to put hitters away, or if it’s more credit to Kansas City’s hitters. “[Royals hitters] want to put pressure on the defense, by not striking out. It’s something in their mindset.” Woody used the past World Series Royals teams as an example that followed the organization to present day.

The final game of the weekend series, and the season series concludes at 2:00 PM CT on Sunday. Adrian Sampson gets the nod for the Rangers against Royals righty Brad Keller. Chris Woodward said before the game that Adrian Sampson will start and the Rangers will not use an opener for Sampson. It’ll be the first time in the past four turns that no opener will pitch before Sampson.