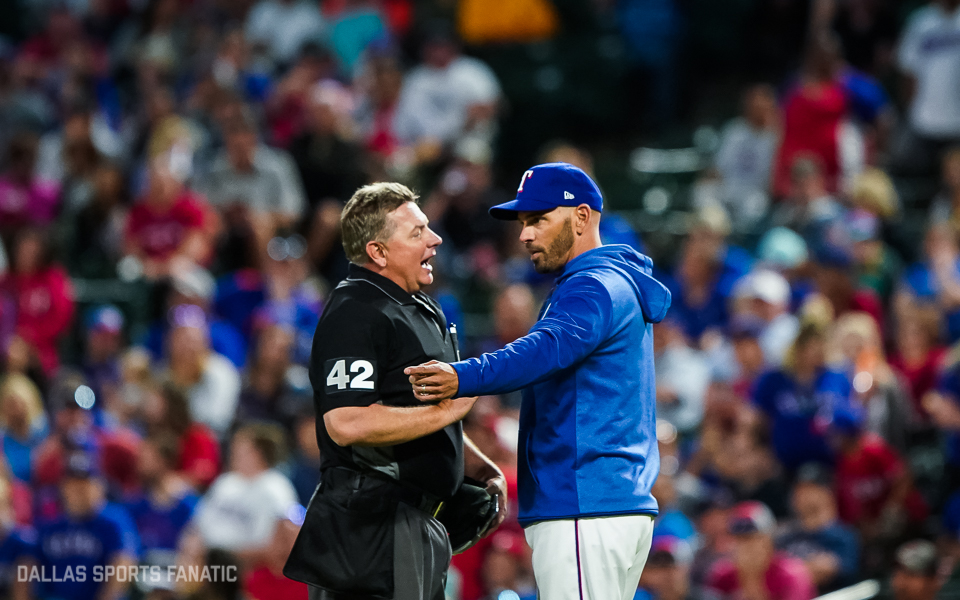 After dominating in the second half of the 2018 season in the role, Texas anointed 25-year-old Jose Leclerc as their closer before the team even met in Surprise for Spring Training back in February.  Leclerc’s 2019 campaign started out in a familiar way.  He didn’t allow a hit through his first four appearances and only walked one batter in that time.  Then, something went wrong when he tried to close out a Rangers lead over the Arizona Diamondbacks back on April 9th.

Things weren’t much better in the desert the next night when Leclerc had to be taken out after giving up a run and putting multiple runners on base while the Rangers were clinging to a 5-2 lead.  There was an eventful, yet successful save a week later at home against the Angels. Then the near disaster against the Astros on Easter Sunday.  All of this had us scratching our heads, but still confident that the young hurler could figure it out without being taken out of the closer’s role.

First year manager Chris Woodward continued to show faith in Leclerc by giving him the ball in these situations despite the rocky results.  When the Rangers played two absolute blow-out games in Seattle last week, Woodward gave Leclerc a chance to pitch in two low-leverage situations: once with the Rangers down 14-2 and once with them up 15-1.  Leclerc didn’t give up any runs in either of those appearances, but he did allow two runners on each time and it wasn’t exactly the confidence boost anyone was looking for.  However, it was the right thing for the manager to do.

Then came Tuesday night against the Pirates.

Leclerc entered the game with a 3-0 Rangers lead and immediately flirted with a catastrophe.  Finally, DFW-native Josh Bell made him pay with a two-out, two-run, game-tying double to deep left-center field. All the air was let out of the Rangers sails and it was seemingly the last straw for Chris Woodward.

Before Wednesday’s 7-5 loss to the Pirates, Woody let the media know that Leclerc was going to take a break from the closer’s role “for his sake.” The first year manager seems to have a very good handle on the emotions of the soft-spoken Leclerc.  After his rough stretch in Arizona a few weeks back, Woodward said that he wanted to support Leclerc and all the pitchers to help them get through certain times. He did continue to support his young closer by putting him in high and low leverage situations to boost his confidence in the following weeks, but something still isn’t right.  So Woodward did what he had to do: take him out of the closer’s role.  It’s what’s best for the player and the team at the moment.

Jose Leclerc is just 25-years-old. He is going to have ups and downs and just because of Rangers fans history with disastrous declines of once dominant closers like Neftali Feliz, Shawn Tolleson and Sam Dyson, that doesn’t mean we should all jump to the conclusion that Leclerc is going down the same road.

With the commitment Texas made to Leclerc before the season, he could potentially be in Texas through 2024 under his new $14 million deal. There will be plenty of time to work through this.  He will be back in the closer’s role, it’s just a matter of when.  Woodward is very confident this will be the case as well.

“We’ve talked. I told him, ‘there is going to come a time when we are pouring champagne on our heads, and it will be because of you closing it out.”

Maybe every manager says stuff like that, but having been in Woodward’s office for an insanely casual chat with the local media before a game, the guy is as genuine as people come.  You can tell he cares about every baseball figure he comes in contact with and this year’s Rangers players are no exception.

While it’s easy to be frustrated with the Leclerc’s results thus far whenever he was expected to be one of the few “sure things” for Texas in 2019, this is still a year of growth for everyone on the Rangers roster and this is just part of the process of growing as a player. With a player-friendly manager like Woodward behind him, Jose Leclerc’s return to dominance will be an easier feat.