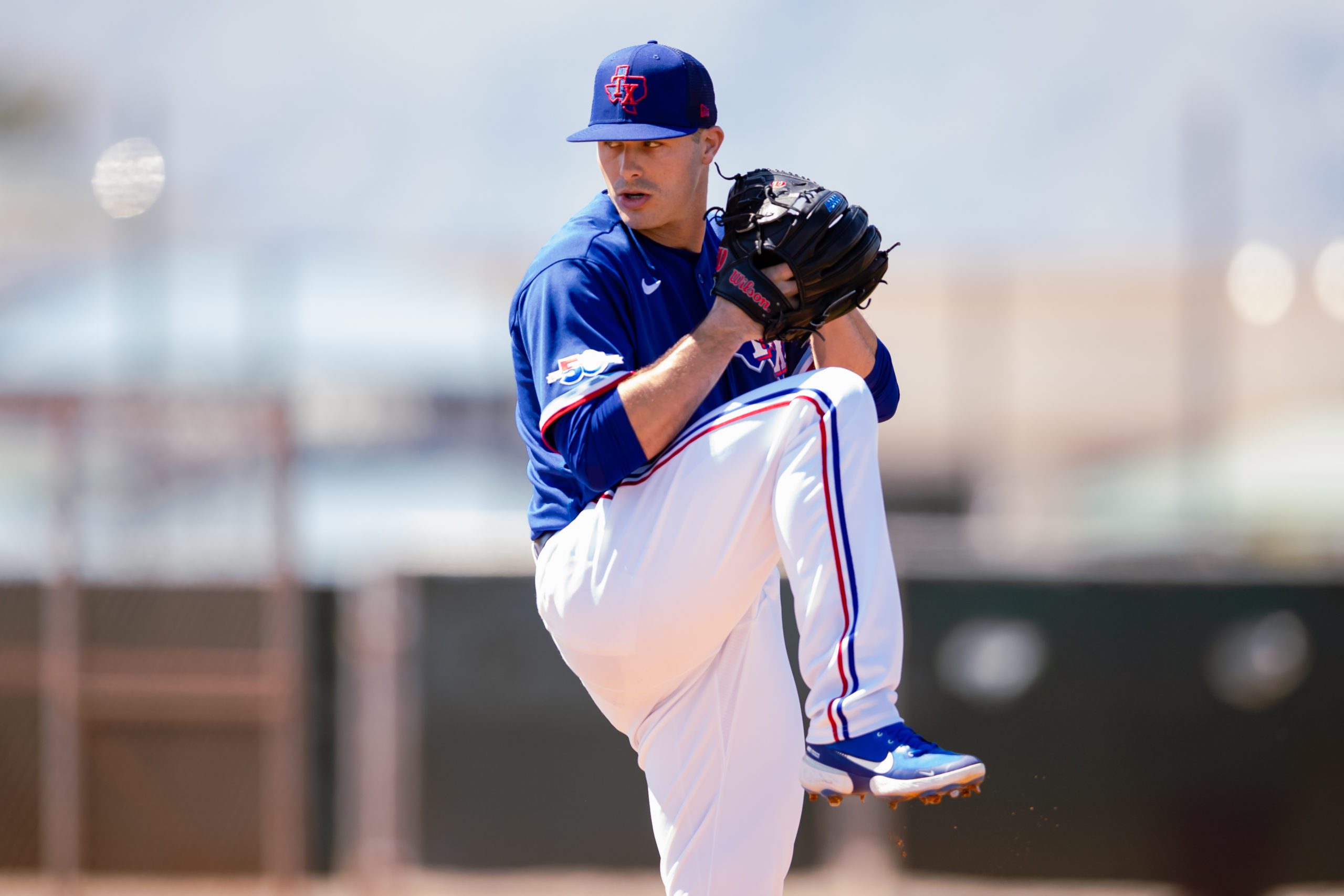 Rangers Pitchers Weigh In on Upcoming Rule Changes in 2023

Rangers Pitchers Weigh In on Upcoming Rule Changes in 2023

On Friday, Major League Baseball announced four rule changes starting next season. These changes include a pitch clock, rubber disengagement (whether it’s step-off or pickoffs) limitation, defensive shift restrictions, and bigger bases. Now three of these rules have come up in the Minor Leagues; therefore, I wanted to get a little perspective from players and coaches who have experienced it in the minors and see how it might translate to the game. So first, we’ll look at how it’ll affect the pitchers. Cole Ragans and John King experienced most rule changes (though the clock slightly varies from the Minors to the Majors).

Pitch Clock: Pitchers must start their motion once the clock hits :00. It’s set at 15 seconds with the bases empty and 20 seconds with runners on base. Hitters must be ready at eight seconds.

From a pitcher’s standpoint, controlling tempo is everything. Now, the clock controls the tempo (primarily) and hitters have a set time where they have to be ready. However, Ragans said one thing with the pitch clock is everything happens in rapid motion, and sometimes as a pitcher, you don’t have a chance to collect yourself and breathe. “It’s nice in a sense that when I’m getting in a funk, I can step back, take a breath, take a moment, get back on my mind, [and] reset myself,” Ragans said. “Where with nineteen seconds, you better freaking make your adjustment quick, then get your pitch and go.”

John King, meanwhile, isn’t much of a fan of the pitch clock. “I feel like as a pitcher, some guys have faster paces than others, and I’m not a slow guy, but I like to take my time a little bit, and it’s hard to get in a rhythm,” King said. “You’re very fast-paced, and [it’s] something else to think about for the hitter and pitcher.”

For Rangers’ co-pitching coach, Doug Mathis doesn’t feel concerned about the implementation. There’ll be growing pains, but a few years later, everyone will adjust. “I’ve coached with the pitch clock [and] I’ve seen it the last couple of years. I don’t think it’s a big deal. I think guys will get used to it,” Mathis told me. “It’s just guys are going to have to experience it and go through it. Maybe change some of their pitch routines, but it’s like anything else.”

One aspect that’ll make things easier (and all three agreed) is PitchCom rather than catchers going through a set of signs. “I think the PitchCom makes that [an] easier transition. I’ve noticed at times with the PitchCom; the game moves quicker at times,” Mathis said. Remember, Minor Leagues do not use PitchCom; it’s only in the Major Leagues. Of course, if the clock expires, an automatic ball is given. Therefore, it’ll be awkward the first time that happens, but I want to see how consistent umpires will be on expiration. I don’t hate it, but I’m not a fan of the pitch clock at the moment. Although AJ Alexy told me about a time he was rewarded with a strikeout because of the hitter not ready.

Pickoffs: Pitchers can disengage from the rubber twice in an at-bat (whether stepping off or throwing to a base). When a pitcher does that, it resets the clock. Any disengagement after that will result in a balk unless a runner is thrown out.

In talking with a few pitchers, this is the least favorable rule of the upcoming changes. I get what the league is trying to do, not develop a copout with a pitch clock reset. However, in a crucial spot in the game with a fast runner on base, you’re begging for a runner like Bubba Thompson to steal the base easily. “If a guy has a bunch of bags, you know he’s probably going to go, and you pick off twice, he knows you can’t pick him off again,” King said.

“I don’t agree with it,” Cole Ragans said. “For the sole fact, when there are guys like Bubba, he can fly. You pick over twice [and] that third time you move, and you don’t pick over, he’s gone. You’re not going to throw him out because he’s so fast and gets such a quick jump.” Cole said it’s about mixing upholds and timing to throw off the base runner.

Shift Ban: Teams must have two infielders on the right side and left side of second base. The fielders must have both feet within the infield dirt. Infielders cannot switch sides (i.e., having the shortstop play second base and vice versa) unless it’s a defensive substitution.

In discussion with pitchers, the shift ban doesn’t affect their game planning. It may affect guys like Dane Dunning, John King, and Martín Pérez, who rely on ground balls regarding results. However, pitchers don’t pitch based on how the defense is aligned.

“I go off of what I’ve seen on my scouting report and the info I’ve gathered in my homework,” Cole said. “So nothing changes for me depending on if they’re shifted or not. I’m still going to throw the guy the same way of what I’ve studied and figured out.”

For King, a ground ball pitcher, he’s okay with it, especially in circumstances where players beat the shift against him. “Especially going away to righties so much, they’re shooting the four-hole and when we got guys lined up on the left side of the infield. With ground balls, guys, you can have good days and bad days. You can have six ground balls, four of them find a hole some days, and you can have ten, and everyone goes to someone.”

“We’ll probably see more ground ball base hits, especially with lefties. We’ll have to be better at striking guys out, but you might actually see more double plays because you can’t shift,” Mathis pointed out. “When we shift, I think it’s harder to turn double plays.” It’s an intriguing experiment if double plays are turned at a higher rate in 2023 compared to 2022.

It ties into the pickoff and disengagement rule because it helps base stealers. However, the plus that comes out of it is player safety. It makes it easier for pitchers to cover first base and avoid injuries from baserunners and their own first baseman if there’s miscommunication. “It makes it easier on the pitcher,” Doug Mathis said. “Three more inches to work with to find the bag and player safety is a good thing. I think it might look weird at first, but like anything else, once you get used to it.”

It will add to more stolen bases likely, which is another adjustment pitchers will have to make. “It’s one of those things that you got to make sure looks, holds, get your pitch quick so you can come set quick, that way you make sure your holds a little longer.”

“If there’s a close play and Nate’s coming over to the bag and has to try to find it and the runner only has a certain amount of area, I just think it’s a good idea. They had it in Triple-A, and everyone liked it,” John King said. Of course, it helps cover the base from a pitcher’s perspective, but I don’t see it as a big deal.

The new MLB base size is SIGNIFICANTLY bigger. pic.twitter.com/JanJGCIyFL

It’ll be tough going into the offseason and Spring Training for everyone to adjust. “Football has made a bunch of change too, and everyone still watches football [and] everyone loves football,” Doug Mathis reiterated. However, I’m curious to see how the veterans adjust to the new rules next year, especially the long-time veterans. “For veteran guys that have been around, it’s an interesting position. They’ve been around for 8-10-12 years, and it’s like your all of a sudden going to switch it up on them. They have a routine that makes them so good,” Cole Ragans said. We’ll have to see.