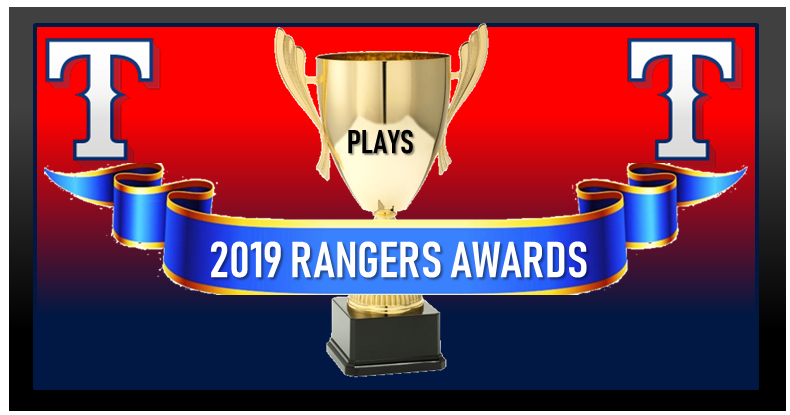 We continue with the 2019 end of season awards by looking back at some of the top plays of the year. There was an abundance of great plays to choose from throughout the year from March to September. Nonetheless, these specific stood out of the bunch.

Some Rangers folks may remember waking up the next morning and looking at the highlight reel on what happened after 10 pm Central Time. Delino prides himself on his defense and showcased it on display that Wednesday night in a 3-0 Rangers victory over the Angels. DeShields talked about how, after he made the catch, he wanted to play around with Brian Goodwin, who are good friends, and signed off with the apple bite after the catch.

Best Rangers throw of the year
Winner: Joey Gallo guns down Byron Buxton at third base before Twins’ Jonathan Schoop scores (July 7 at MIN)
2. Elvis Andrus spins behind Minor and throws out Jason Kipnis with a little help by Ronald Guzman (June 20 vs CLE)
3. Joey Gallo throws out Kolten Wong on a 95.8 MPH strike (May 17 vs STL)

Joey Gallo made a couple of unreal throws from the outfield. A lot of folks remember Joey throwing out Kolten Wong in mid-May and throwing out Jose Altuve at second base in mid-July. However, the gun down of Buxton in Minnesota was not only fantastic to catch a speedy runner, but also keep Schoop from scoring the go-ahead run in the fourth inning. The Rangers ended up winning this game in extra innings and went to the All-Star break on a high note. According to Statcast, the throw clocked in a 94.7 MPH. While the Wong throw-out came in quicker and halted a possible Cardinals rally, there’s no question that Byron Buxton is one of the faster guys in baseball. Either way, each throw was incredible.

Craziest Rangers play of the year
Winner: Rougned Odor straight steals home (June 9 vs OAK)
2. Hunter Pence’s Inside the Park HR (June 11 at BOS)
3. Shawn Kelley throws the ball to the second deck after time was called (September 13 vs OAK)

Fun fact, both Chris Woodward and Red Sox manager Alex Cora earned their first career ejections within thirty minutes of each other that Tuesday night at Fenway. Well, that’s what you get with umpires Vic Carapazza and Angel Hernandez on the same crew. I watched it from the stands and was completely confused about what occurred. However, knowing the context and talking to Woodward later in the season, it all made sense. The ejection was due to Hernandez not giving Woody enough time to challenge a play at second base where umpire Jordan Baker changed his mind from safe to out. In September, Chris Woodward told me that the league reached out to Woody and said to him that he (meaning Woody) was in the right in the situation.

There’s still more to come on the 2019 awards with the overall season awards as we close the book officially on the 2019 Texas Rangers regular season.