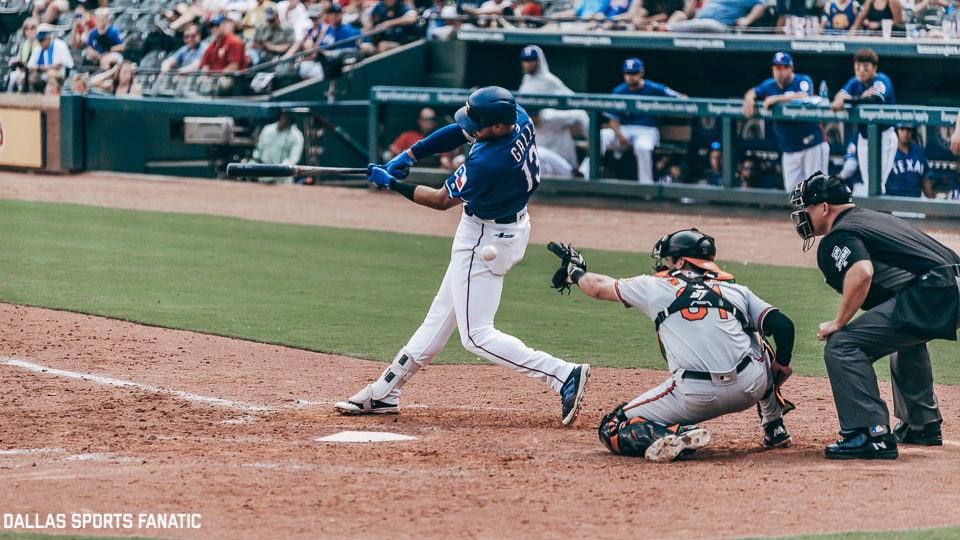 We’re less than five percent into the Major League Baseball season, but the Texas Rangers have a winning record and it has been a fun ride so far.  Multiple comeback wins and even a walk-off win on Sunday to wrap up their opening series with the Cubs.

They’ve had an above .500 record since their win over the Astros on Tuesday and according to the Dallas Morning News’ Evan Grant, the Rangers have already passed the number of days they spent being three games over .500 during this season than they did each of the last two seasons combined.

Progress!  Will it stick?  Some of our Rangers staff gathered to breakdown the good times while they’re still here.

Who has been the most surprising player during the first week of the season?

Alex: It’s early, but it’s ridiculous the results Joey Gallo have shown to begin the season. Gallo is showing a more passive approach by taking what the pitcher gives. Therefore, Gallo controls the count and is prepared to do his damage or take a free pass. In doing that, Gallo reduced his chase rate by nearly fifteen percent from last season. The difference looks to be that Joey is leveling his patience and power, rather than letting his power dictate all of his at-bats. I knew results were coming, but it’s astonishing how quickly they’ve come.

Garrett: It has to be Asdrubal Cabrera. He’s cooled off considerably from the Opening Series, but I don’t think anyone would’ve had him pegged for tied with the team lead in homers and RBI after the first week. For a guy who’s offensive game has never been his strong suit, it’s encouraging to see, and does a little to fill the Adrian Beltre-sized hole on offense.

Who has been the most disappointing player?

Alex: It’s difficult to gauge, but Jesse Chavez was a force in the Rangers pen last season. The Rangers sent Chavez to the Cubs like Cole Hamels in July and then they resigned him back to the squad this winter. Currently, Chavez has pitched in three games, allowed nine hits and six runs and only recorded eight outs. It looks like Chavez is using his fastball a lot more, nearly at a fifty percent rate (nine percent higher than 2018). Also, he hasn’t used the slider and curveball much and it’s making him a three-pitch reliever. What made Chavez beyond decent in 2018 was the mixture of pitches in his arsenal. First year manager Chris Woodward will continue to use him.  On the positive side, he did strike out multiple batters in his last appearance against the Astros this week.

Garrett: Delino DeShields. For a guy who entered the season with his back already against the wall, at least to keep his job, he’s doing himself no favors with his start offensively. Entering Friday, he’s just 2-of-19 at the dish (it helps considerably that one of those hits was a grand slam). Texas put a vote of confidence in him by not pursuing a stop-gap option like Adam Jones or Rajai Davis this offseason, but with the added pressure of high-level outfield prospects Julio Pablo Martinez and Leody Taveras, DeShields has to turn it around quickly to keep his starting spot.

Of all the hot starts on offense, who are you most confident will continue their ways all season?

Alex: Elvis Andrus’ start is a force for the Rangers. In a small sample size, Elvis has batted more baseballs to the opposite field than he has to his pull side (Michael Young-esque). Andrus’ soft contact percentage is 4.3 percent, meaning he’s made medium or hard contact 95.7% of his at-bats. I see Elvis continuing this trend because he’s a more experienced veteran and can adapt to adjustments pitchers will make. Now that Elvis is taking the ball the other way, he can adjust to pitchers throwing more inside and try to get him on his front foot.

Garrett: I think that Elvis Andrus can tap into the offensive superstardom we saw in 2017 and keep it going after doing it so far in 2019. Injuries hampered him last season, but if Andrus and his .414/.433/.552 slash line can stay healthy, he’s a dark horse All-Star candidate at shortstop for the American League team in July.

What have you thought of Chris Woodward’s first week as manager of the Rangers?

Alex: The players are buying into Woodward and this coaching staff’s philosophy. While his “trust the process, don’t chase results” hammers into the skulls of the fans, adjustments are being made by these players. The Rangers roster shows growth on and off the field and that’s incredible considering a vast amount of young players on this roster. The only question is once things go south (they do for everyone), will the players continue their approach or will they revert back to their old habits?

Garrett: Chris Woodward has been impressive so far. Yes, the team is off to an unexpected 5-2 start that included series wins over 2 defending playoff teams. If you look deeper, you notice higher quality at-bats. Players are more patient at the plate- Joey Gallo has drawn an impressive 8 walks in just seven games. Nomar Mazara is working deeper counts and drawing more walks than he is striking out. Offensively, the team’s approach, guided by Woodward, has led to quality at-bats and runs piling up.

It’s been a fun ride so far for the Rangers and their fans.  Who know how long it will last, but enjoy them while they do!