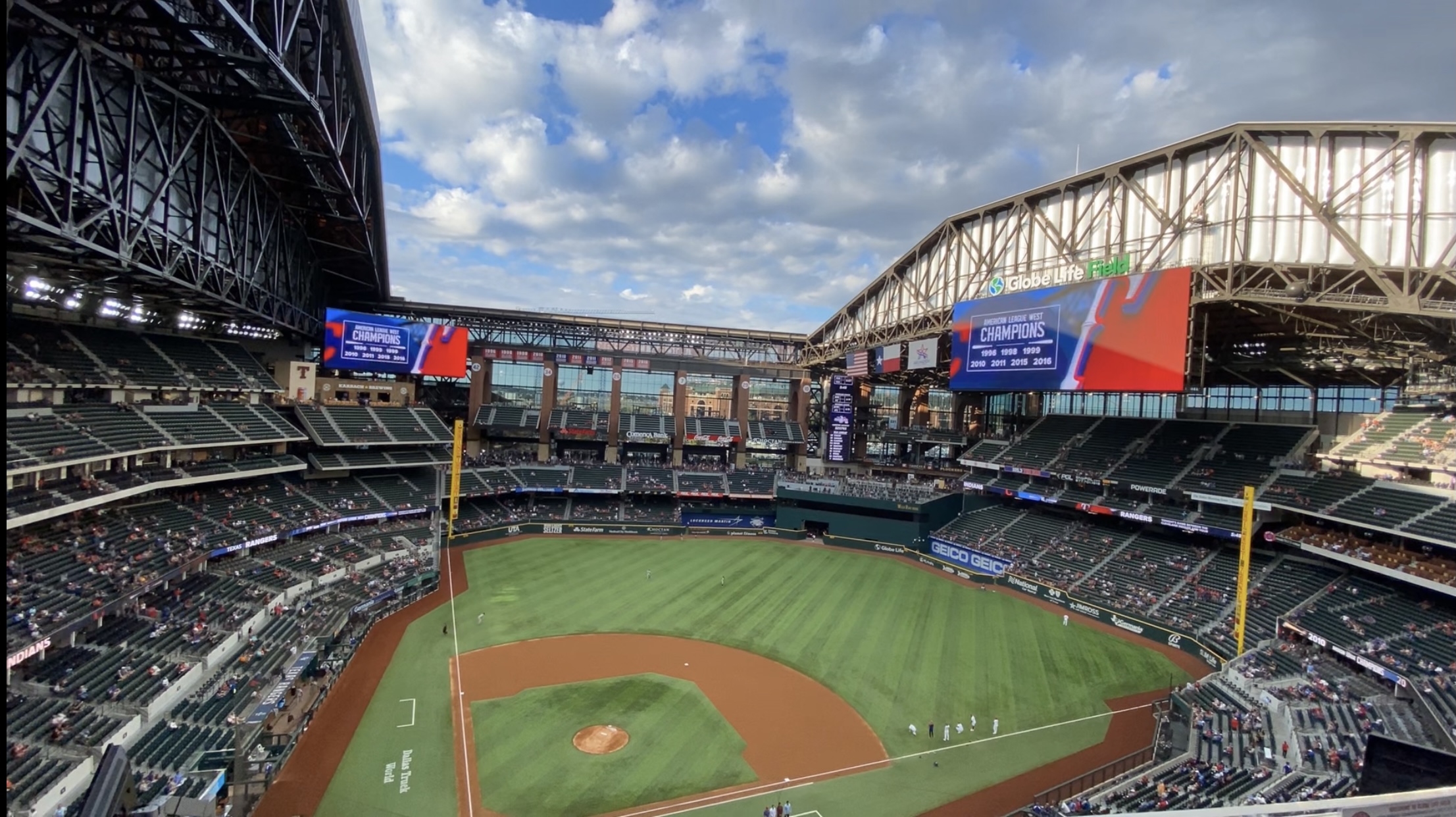 The Rangers 2021 season concluded Sunday. The club finished with 102 losses, the second-most in franchise history. There’s a lot of work to be done in the offseason, but I saw a lot of growth, and so did Isiah Kiner-Falefa.

“I think everybody has grown,” Isiah said. “If the numbers don’t show it, it’s the maturity. The peacefulness and calmness now were a lot better than it was in the middle of the year.” So now that we’re into the offseason let’s finish the September awards (with a little October mixed in).

Game of the Month: September 11th at Athletics

The Rangers made two furious comebacks in September. First, they trailed 5-0 on September 30 against the Angels after one inning. Also, on September 11, they trailed 6-2, heading into the eighth inning. In the 9/11 game, they were in Oakland against a playoff pushing Athletics club. It looked like it was going to be yet another road loss, then the skies opened. DJ Peters hit a two-run homer, followed by Nathaniel Lowe’s walk, a Yohel Pozo double, and a Jonah Heim homer against his most recent former team. Then, to add more insurance, Leody Taveras homered in the ninth. It was great to see.

Player of the Month – Andy Ibáñez

Ibáñez was the most consistent Rangers hitter in September. He led the club in OPS at .948, second in average, second in slugging, and tied for best on-base percentage. Yes, it’s a shorter sample size than, say, Isiah Kiner-Falefa, but when Andy was on the field, Ibáñez made his presence known. Another notable for Ibáñez, he struck out seven times in 42 at-bats. To put that in perspective, Jason Martin struck out seven times in 20 at-bats, and Charlie Culberson struck out 10 times in 34. Not sure how the offseason goes, but Ibáñez has indeed planted a thought inside the organization’s mind.

Be on the lookout in the next month for twenty Rangers 7 interviews (you may have heard a few). So what did I learn from that? There are a lot of funny guys on the club, and a few said Jonah Heim is low-key. Well, we had to wait until the second to last game to bring out the Jonah Heim humorous side. Rangers’ reporter Emily Jones asked what Heim’s offseason plans were, and Jonah delivered one of the best answers of the year.

Quote of the night goes to Jonah Heim. Heim was asked what his offseason plans were.

"I'm going to try to get a big as Adolis." #StraightUpTX

Can we get a shoutout to Kohei Arihara for being the last Rangers’ pitcher to hit in a regular-season game in regulation. But, of course, that is assuming a universal DH is intact to start next season. I asked him how he thought his at-bats were, and he chuckled.

Asked Kohei if he thought his 93.3 Exit Velo (1/10 base hit chance) groundout to Ahmed was a hit.
Kohei laughing, "no." #StraightUpTX

Two days after this play, Adolis García cemented himself offensively in Rangers’ rookie history. But if you needed any indication of García’s incredible season, this play in the second to rob David Fletcher is inhuman. Gacia said he didn’t feel any pain or anything the next day and played Fletcher ideally before the pitch. My favorite was Nathaniel Lowe the next day and his smile when I asked if he thought García would make the play. We all need to take a day and watch constant Adolis García highlights. Yes, that’s going to take all day.

I’m somewhat cheating because the best play award includes both the arm and the range. But you cannot limit Adolis García’s September to just the catch he made against the Angels. His throw to get Yankees Kyle Higashioka was incredible. Rangers fans saw a lot of that for a couple of seasons with Joey Gallo, and now they saw it with Adolis. If he hadn’t split time between center and right, he could have won a gold glove. Unfortunately, Tony Beasley told me he got a little worn down the stretch, which is what center can do, so if Adolis stays square in right (like Joey did), I’m curious what García does his sophomore year.

Choosing the Cowboy Hat look of the month was tough. Jordan Lyles has won it three times since the start of September. Since Jordan won the most hats, I figured to award it to the man with the most. So which look was the best? I have to go with the last one. Plus, being a South Carolina native, wearing the cowboy hat while talking in his southern accent, Lyles fits the part of a Cowboy.

Let's hear it for Lyles! 🤠 pic.twitter.com/1RCj4SgXCR

Former Ranger Kyle Gibson loves to hit. He’s expressed that to me a few times. He got that chance going to Philadelphia and then homered for the first time in his career on a September night in Philly. Jose Trevino congratulated him on Twitter the next day. After Jose’s congrats, Gibson responded that he’d keep talking about it until Trevino went deep. Leave it to Trevino to go deep less than 24 hours, and both guys responded to each other. The combo of Trevi and Gibby won’t ever be lost.

Some guys need some extra motivation! And my guess is that José didn’t want to hear about it any longer than he already did during our phone call today!! Haha nice swing @HipHipJose5!!!

When DJ Peters came to the Rangers, MLB.com’s Kenndi Landry pointed out that DJ Peters and Sebastian Stan (who portrays The Winter Soldier in the MCU) were identical twins. Well, on the last homestand, Chris Halicke of Sports Illustrated hinted to DJ and Peters was all on board. So when DJ homered on Thursday’s finale vs. the Angels, the arm swing came out.

I might or might not have had something to do with it. I do know that @8Peters was all about it when we talked with him yesterday.

Still, hats off to @kennlandry for pointing out that DJ and Sebastian Stan are twins separated at birth. pic.twitter.com/Lf7s075tOY

I can’t speak for anyone else, but I did miss Lance Lynn’s up-frontness in post and pregame interviews. Lance isn’t shy about what’s on his mind, and he gets to the point. I respect that. Lance Lynn and the White Sox came to Arlington for a series, and I asked Lance about Taylor Hearn. Lance seemed excited for the chance Taylor Hearn got in 2021 and hoped for the best in 41 of the 42 games he played.

I think a lot of us figured that the flexor tendon strain on his right arm pretty much ended Bush’s season and that he wouldn’t get the chance to pitch in the majors in 2021. The Rangers made a roster move on the final day, giving Bush a chance to pitch one inning. “He could have easily said there’s no reason to come back like Choo did last year,” Chris Woodward told me. “His comeback story was cool. The resiliency and grit to say I want to pitch one more time, I want to show people I’m healthy, I want to get back on the mound. That was his goal. It means a lot to those pitchers, especially in that bullpen.” All indications after Sunday’s finale is Matt Bush is nowhere done in his MLB career. He wants to keep it going.

"I don't know how much longer I can do it, so let's just go out there, give it my all and let's have fun each and every time."

Matt Bush finished his season with a 1-2-3 sixth inning for the @Rangers after missing most of the season due to injury. pic.twitter.com/BjNTL726HK

The offseason appears to look busy for the Rangers, but now we can all rest up. Hopefully, next year will come knocking quickly, and we can talk about Rangers baseball after Columbus Day in 2022. A special thank you to Rangers fans for your support during this rough season. You guys are amazing! Here’s the final tally of who won the Cowboy Hat how many times.