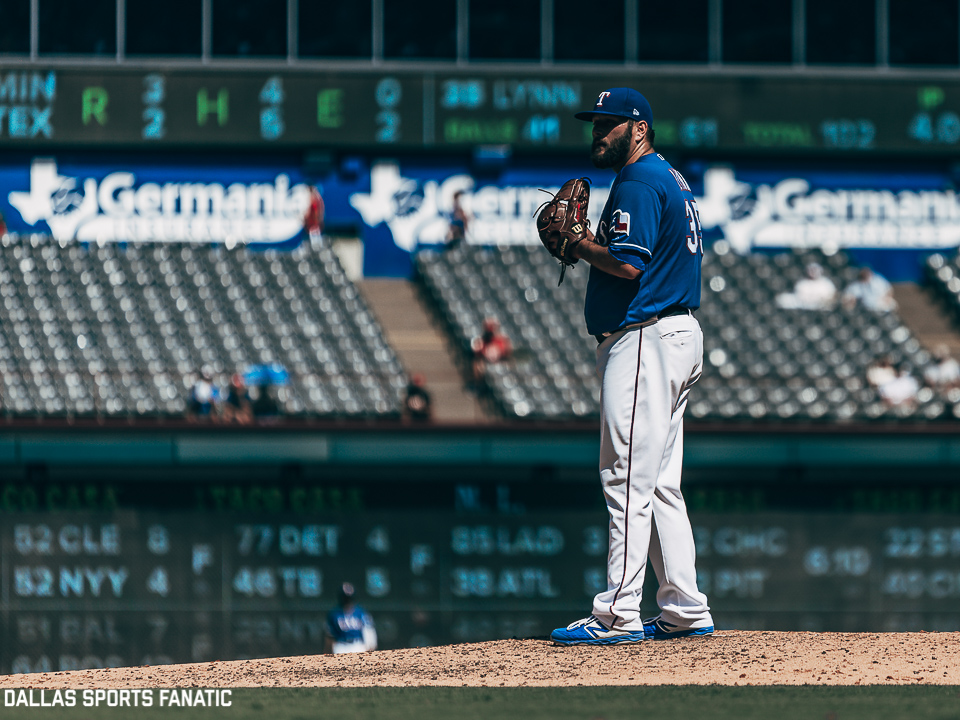 Rangers sweep Angels thanks to oddities and a Lance Lynn milestone

Rangers sweep Angels thanks to oddities and a Lance Lynn milestone

2020 has brought us some unexpected and strange occurrences, most notably the shortened MLB season. If we were to pick out a game that best represented 2020, Sunday’s Rangers win over the Angels might correctly describe the year of kookiness. After a couple of nail-biting games, the Rangers looked to keep their momentum going Sunday to complete a three-game sweep of the Angels. For the first time, the club brought out the powder blues with the red hat combination and received positive feedback. However, the combination equaled out to a crazy Sunday afternoon at Globe Life Field.

The Angels made Lance Lynn work. Lynn scratched and clawed his way through five innings and 109 pitches. Los Angeles fouled off twenty-one pitches from Lance, and the strike zone varied from first time home plate umpire Nate Tomlinson. The body language from Lynn made it clear it was a frustrating outing for Lance, especially with rookie umpire Tomlinson making his MLB debut Sunday. On the day, Lynn allowed a two-run home run to Tommy La Stella in the fifth inning along with four hits, three walks, and six strikeouts. Lance ended up the winning pitcher, earning him his 100th career win.

“That’s just part of the game, you try to do everything you can, try to make pitches sometimes it doesn’t go your way, sometimes it does. Nothing but happy smiles for me” Lance Lynn said after the game. Lance also talked about the Jeff Mathis mound visit. “It wasn’t much about anything except he was trying to make where I needed to be and I was, and I needed somebody else to be where they needed to be and I wasn’t talking to him.”

“I’m hoping today is the day just, it’s a couple rockets at the middle and, and we go from there,” Woody said. “But we need more production from him. He is a big part of our offense, and when he gets on base like I said, he causes havoc. He creates pressure. So we need him to get on base one often.” Andrus finished the day with a single and a double in Sunday’s win.

Things got even more chaotic in the fifth inning. Nick Solak hit a deep fly ball to right field where Angels’ young right fielder, Jo Adell, tried to make a running catch. The ball popped out of Adell’s glove and went over the wall, which was initially ruled a home run. However, after an Elias Sports Bureau consultation, the ruling wasnreversed and the scoring changed to a four-base error on Adell, leaving Solak still homerless for the 2020 season. Solak did pick up two doubles in Sunday’s victory. Nick Solak answered if he felt he deserves a home run. “Yeah I think I deserve a home run for sure. If I were a scorer, I would err on the side of giving guys hits.”

From my research, it looks like the last four-base error in #Rangers history was September 25, 2011 vs Seattle when Treyvon Robinson misplayed a ball. Esteban German was the beneficiary #togetherwe

The bullpen continued their domination. Edinson Volquez got charged with a run, which ended the Rangers bullpen scoreless streak at eight straight innings. Other Rangers relievers got into the act with Rafael Montero and Ian Gibaut unavailable per Julio Rangel. Joely pitched a nice seventh inning, but Brett Martin’s command got away from him and he only faced the minimum of three hitters with Jimmy Herget coming in to close the eighth inning successfully. Despite it not being a save situation, Chris Woodward brought in Jonathan Hernandez to close the game. Even though Montero didn’t pitch today, I asked Woody if Montero’s return created a spark in the Rangers pen. “Absolutely it gave us a huge boost, and it moved everyone down a slot and gave us a little more length, a little more depth in the bullpen. I think it just solidified a little bit of the bullpen. To see everybody’s pitched well this series and this is a pretty good lineup.”

Jimmy Herget gets Luis Rengifo swinging and escapes a bases loaded jam. Bottom 8th, #Rangers still lead 6-3 over the #Angels #TogetherWe. Jonathan Hernandez was warming up in the pen.

The Rangers welcome the Seattle Mariners to Globe Life Field for a three-game series starting on Monday. Kyle Gibson starts the series off against Seattle’s Justin Dunn.