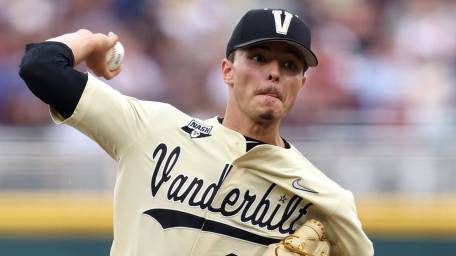 Rangers take a step in right direction in drafting Leiter

Rangers take a step in right direction in drafting Leiter

In a draft that never had a definitive number one pick, and saw a surprise at the top, the Texas Rangers might have walked away as the real winners.

With the selection of Vanderbilt’s Jack Leiter- arguably the biggest name in the 2021 class- the Texas front office made a concerted step in charting the organization’s future.

Leiter, 21, rose to national prominence in two seasons playing for the Commodores. He went 11-4 with a 2.13 ERA and a whopping 179 strikeouts as Vanderbilt finished as national runner-up to Mississippi State in 2021. Vandy has also produced MLB All-Star caliber arms like David Price, Sonny Gray, Kyle Wright and former Ranger Mike Minor in recent years.

That’s not where the gaudy numbers stop, however- Leiter also recorded a whopping 15 strikeouts per nine innings while tying teammate and New York Mets draftee Kumar Rocker for the NCAA lead in striekouts.

Leiter also boasts a no-hitter to his credit- his came in his first SEC start against powerhouse South Carolina in Nashville. He walked the first batter, but set down 27 Gamecocks in a row after that point on the way to instantly becoming a household name.

Leiter becomes the Rangers highest draft pick since 2015, when Texas took right-hander Dillon Tate No. 4 overall. Tate spent very little time in the organization- the Rangers flipped him to the Yankees for Carlos Beltran at the 2016 deadline- and is now on Baltimore’s big league roster.

But Leiter figures to be a different story. He’s the kind of player that a fledgling franchise like the Rangers need to build around. A group that hasn’t made the postseason since 2016 and hasn’t looked pretty doing it gets a real shot-in-the-arm from what could be a generational talent.

Leiter hails from a baseball family, too- his father, Al, played 19 seasons in the majors, while his uncle, Mark, and cousin, Mark Jr., all also saw time in the bigs.

Though there were talented bats available, Texas’ pick of a talented pitcher with starting potential fills a position of great need. Over the last four seasons- all which Texas finished with a below .500 record, the team has pitched to a 4.86 staff ERA.

The current major league rotation lacks talent aside from ace Kyle Gibson, and is still waiting on prospects like Hans Crouse, Cole Winn, Cole Ragans to develop- all early round picks in the past few seasons- to reach the major leagues.

The Rangers have returned to the archetype that once branded the team in the mid 2000’s- all offense, no pitching. Although today, the offense isn’t good, either. Even so, Leiter is a step in the right direction for an organization that desperately needs one.