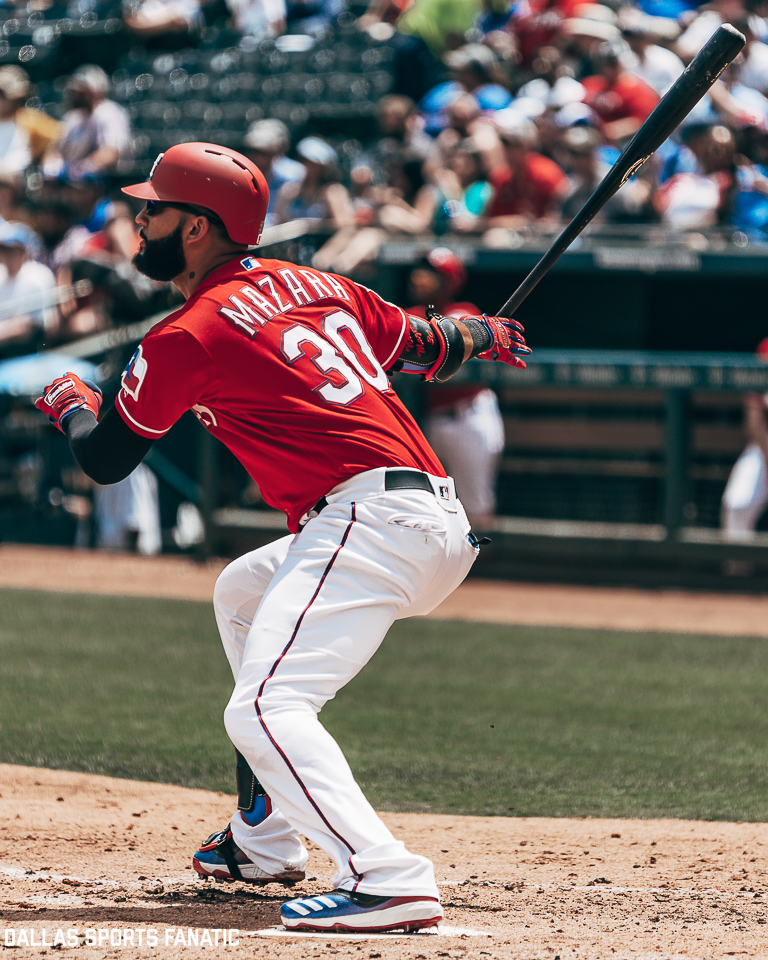 It’s been a rough go in Rangers land the past two weeks. The club comes into Friday’s contest losing nine of their last eleven games. Also, the surgery on Joey Gallo’s wrist will sideline him for the next four to six weeks. With the tables turning downward, the Rangers have some decisions to make in the next six days. The trade deadline is approaching, and fans are hearing Mike Minor, Lance Lynn, and Hunter Pence’s names throughout media outlets. However, it is Nomar Mazara’s name starting to surface around the trade rumors.

In his first three seasons, Mazara’s stats show one thing, consistency. While the numbers aren’t terrible, there doesn’t appear to be any real progression made. In 2019, Nomar is on pace for another twenty home run, .255 average, .750 OPS season. It isn’t terrible by any stretch, but we’re talking about a guy the team sees as a cleanup hitter in a Major League lineup not a six or seven hole hitter.

This season is Mazara’s  fourth season, and his second big league coaching carousel, so is it time for the Rangers to move on? Let’s face it; the potential is there for Mazara. Nomar shows he can go the other way, he shows immense power and decent patience, but the consistency in those qualities lack, and the progression looks nonexistent.

Last Tuesday, before the Rangers game against Arizona, Nomar was a significant topic of discussion. The media asked Rangers manager Chris Woodward if this Nomar, the performance the team and fans see, is what ultimately we all are going to get as a player. “We talked about that a lot. We talk about that with every player, is there more, is there a higher level they can go to, physically, mentally, spiritually, everything.” Woody later added, “As long as he’s here, we’ll continue to push him. That’s something for Jon Daniels and I to discuss and say, “is this the best we’re ever going to see him?” Until we get to that point where, we both put our heads together and say “well, we tried everything we could, that’s the most we’re ever going to get out of him.” But maybe, until we see something other than what we’ve seen.”

What does all of this have to do with next week’s deadline? Well, that inquiry last week brings up a good point: is it time for a change of scenery for Nomar Mazara? If Jon Daniels and the Rangers staff feel that they’ve given Mazara all of the options to which the results haven’t panned out then maybe it is time to put Nomar on the market. Mazara is only twenty-four years old with four years of significant league experience. Despite the lack of progression, teams may jump at the opportunity to snag a young player at the lowest of the price (think of it like bargaining at a flea market).

I don’t doubt that the Rangers will exercise auctioning Mazara, especially towards the end of the deadline. As of right now, several teams show interest, but the San Diego Padres and Chicago White Sox  brought scouts to watch Mazara play on this current road trip.

Ultimately, I feel the Rangers will hang on to Nomar Mazara and haven’t reached that point where they’ve tried everything. With the way the teams are struggling, and how blood-thirsty the trade market is going to be this year, I suspect almost every Ranger to have some availability on the trade market. Remember, there is no waiver August 31st deadline this season. But hey, stranger things have happened, and it’s not final until the clock hits 3 pm next Wednesday.