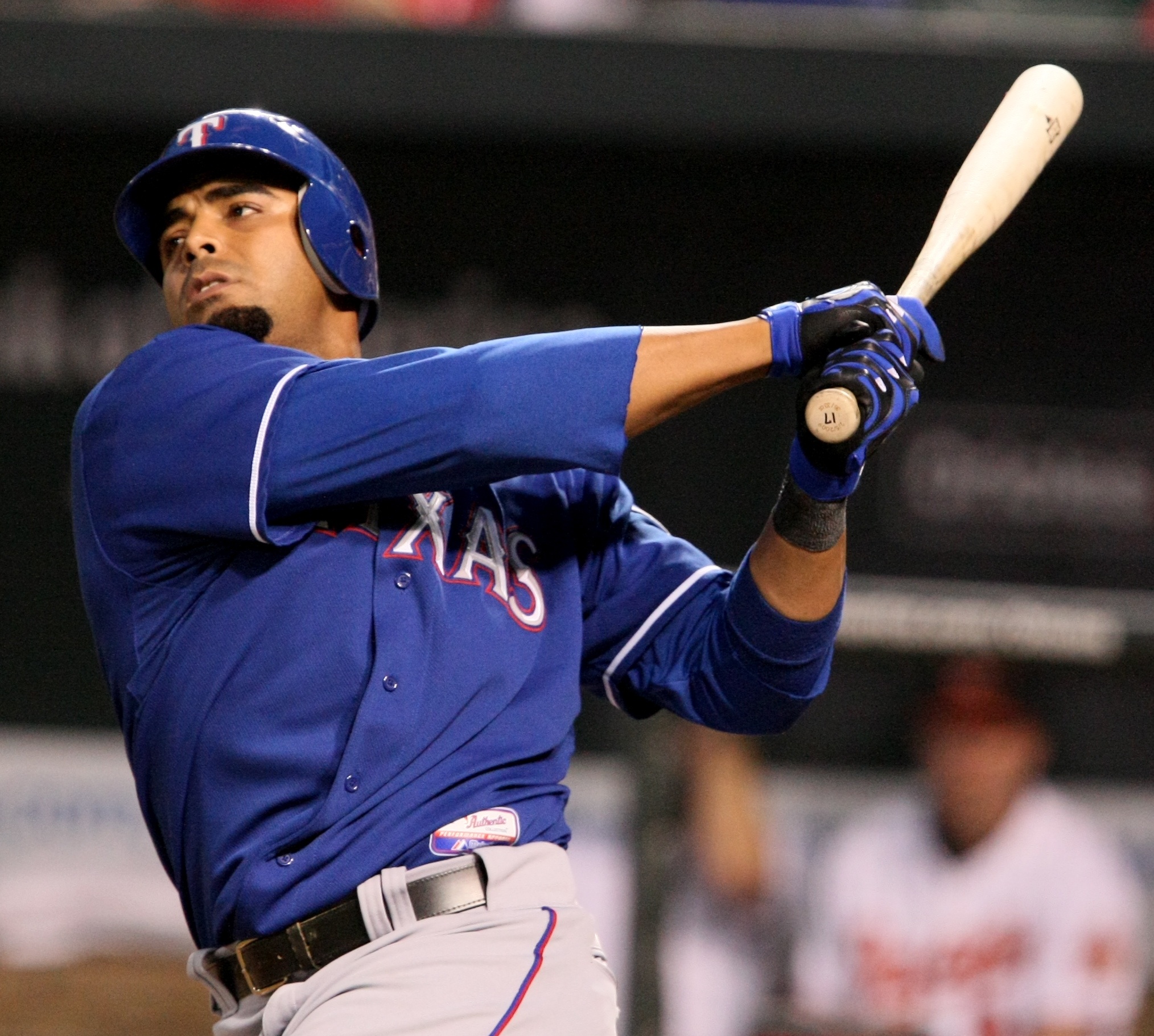 Rangers What If: The Nelson Cruz 50 game suspension in August 2013

Rangers What If: The Nelson Cruz 50 game suspension in August 2013

It’s incredibly unfortunate that Nelson Cruz will always be tied to what will probably remain the most devastating moment in Texas Rangers history. When he missed that somewhat tricky fly ball to the warning track at Busch Stadium back in October 2011, he missed a chance to seal the Rangers’ first ever world championship. In the moment, fans were furious with him. Most were able to forgive him over time because he was an incredibly talented hitter. However, fans’ loyalty and trust of him were rattled again in August 2013 when Cruz was suspended for fifty games (not a coincidence that this happened to be the number of games left in the regular season at that point) for his involvement with the Biogenesis scandal that saw the likes of Alex Rodriguez and Ryan Braun also get suspended for long periods of time.

The suspension came when the Rangers were still in a position to feel comfortable about a playoff spot. Of course the team made it to the World Series in 2010 and 2011, but their late season collapse in 2012 led to a quick exit from the postseason thanks to the new Wild Card Game implemented that season. The 2012 offseason saw the departure of Michael Young and Josh Hamilton and the Rangers were caught in the middle of trying to still pounce on championship opportunities and remaking that core on the fly.

The 2013 Rangers certainly looked different, but they were not a bad team at all. When Cruz was suspended on August 5th, Texas was just 2.5 games back of the Oakland Athletics in the American League West and just a half game back from the Cleveland Indians for the second Wild Card spot. The loss of an All-Star bat like Cruz that already had 27 home runs in early August certainly hurt,  the Rangers were able to keep their heads above water for quite a while. Texas would work their way past the A’s for a 2.5 game lead for several days in late August, but then things fell off a cliff.

The first half of September was a nightmare for Texas as they went 3-13 from August 28th through September 16th. The division lead became unreachable, so the team’s only shot would be to once again sneak into the postseason via the unpredictable Wild Card Game. Entering the final week of the season, the Rangers were 84-71 and had their backs totally against the wall. Somehow, the team won their last seven games to get to a very good 91-71 record. Unfortunately, that still wasn’t enough to guarantee them a spot in the postseason. They were going to have to win a play-in game just to get to the Wild Card game as they hosted the Tampa Bay Rays on Monday, September 30th in Arlington.

The Rangers would go on to merely offer Cruz a one-year qualifying offer worth $14.1 million after falling short of the postseason, but he would decline it searching for a multi-year deal. How’d that work out? Well he would wait about three months until he’d seemingly settle for a one-year/$8M contract from the Baltimore Orioles. A 2013 All-Star who finished in the top 20 in the majors for home runs and would have been top 20 in slugging percentage if he had accumulated enough at-bats after his regular season ending at 109 games: A one year deal for “just” $8 million.

With all this in mind, it’s hard to imagine what could have happened if Cruz hadn’t had an untimely suspension that cost him the last fifty games before he became a free agent for the first time in his career. What would have been the final result of that 2013 season? What would have happened between Cruz and the Rangers in the winter of 2013-2014? What about after? I’m going to try to work through that now. I’m not going to try to toe the line of “What if Nelson Cruz didn’t take steroids?” I’m just going to ask “What if Nelson Cruz wasn’t suspended in August 2013?”

What DID happen: Nelson Cruz suspended for final 50 games of the 2013 regular season. Rangers lose tiebreaker game for final spot in the AL Wild Card game. Cruz declines Rangers qualifying offer for 2014, ultimately signs with BAL in 2014 for one year and $8 million. Texas is yet to find an equal right-handed bat in the middle of the lineup ever since.

What WOULD HAVE happened: A tough fight for the AL Wild Card spots comes down to the final series of the season, the Rangers finish 93-69– just two games back of the A’s in the division and one game clear of the Indians and Rays for the right to host Cleveland in the AL Wild Card Game.

Instead of facing the reigning AL Cy Young winner David Price in a winner-take-all showdown like they actually did in the tiebreaker game in 2013, Texas catches Indians rookie starter Danny Salazar in his first ever start in Arlington. Cruz provides the key double to left-center field in the seventh inning as the Rangers bullpen holds down a 9-6 win to advance to the ALDS. Texas runs into the team of destiny and falls to the eventual champion Boston Red Sox in just four games, losing the series 3-1. Derek Holland and Yu Darvish have strong postseason starts in tough losses, providing the front office confidence to prioritize the offense in the offseason while entrusting the likes of Darvish, Holland, a healing Matt Harrison and a young Tanner Scheppers to make the move from bullpen to starter.

Cruz finishes the regular season with over 150 games played, a career-high 38 home runs, 110 RBI and an OPS comfortably over .900. These numbers earn him a top ten finish in American League MVP voting alongside teammate Adrian Beltre, but aren’t anywhere close to the incredible numbers of back-to-back winner Miguel Cabrera. Coming off an All-Star appearance and top-ten MVP finish season, the Rangers are prepared to offer fan-favorite Cruz a multi-year deal in the three to four year range, but the dollar amount takes negotiations into December.

While those negotiations stall, the Rangers still go ahead with their mega trade of Ian Kinsler for Tigers slugger Prince Fielder and cash to help off-set the price of absorbing the remainder of Fielder’s 9 year/$214 million deal he signed in January 2012. After just two years in Detroit, the Tigers were looking for a way out of that deal, but the Rangers were excited by the prospects of adding the mighty power of Fielder’s bat to pair with Adrian Beltre, who was coming off his third straight 30 homer campaign in his first three seasons in Texas. This deal catches Cruz’s eye as the idea of a 3-4-5 part of the lineup featuring himself, Beltre and Fielder reminds him of the Josh Hamilton/Vladimir Guerrero/Cruz trio in 2010 and the Hamilton/Beltre/Cruz trio in the middle of the incredible Rangers lineup in 2011. After seeing fellow 33-year-old OF Curtis Granderson settle for a 4 year/$60M contract with the Mets following an injury riddled 2013 season, Cruz realizes he needs to take the money from a team he loves when it’s available and the Rangers announce they have agreed with Cruz on a five year/$85 million contract to keep him in Texas through his age 37 season. It’s leap of faith from the organization, but the idea of keeping key parts of their World Series teams like Cruz, Beltre and Elvis Andrus remain important to them as they begin to build the next era of Rangers baseball.

What DOES NOT happen: The Rangers do not sign Shin-Soo Choo to a 7 year/$130 million contract right before Christmas, Choo instead signs a similar deal with the Seattle Mariners who are ready to go all-in after also signing Robinson Cano to a 10 year/$242 deal earlier that month.

What might arguably be the most maligned move of the Jon Daniels era is the mega contract the Rangers gave Choo in December 2013 following a 2013 season where he finished 12th in NL MVP voting with a .423 OBP for the year, only trailing the likes of Miguel Cabrera, Joey Votto and Mike Trout. Choo’s 2014 was a disaster just like the rest of the Rangers roster due to some lingering injuries and then he missed the vast majority of the 2016 season with a variety of injuries before a fractured forearm took him down in August. Now six years through this seven year deal, Choo has been consistently healthy the last three seasons and even earned an All-Star nod in 2018.

Fans and media have frequently cited Choo’s contract as one of the worst in baseball, but it’s tough to totally agree with that. Now 37, Choo’s $21 million salary in the final year of his deal is tied for just the 35th highest salary in baseball. Sure, he’s overpaid, but it could be a lot worse. Names higher on the list of highest salaries in 2020 include:

Sure, these other bad contracts don’t make Choo’s “good” but they certainly make it easier to swallow considering how consistent Choo has been on the field the last three seasons. His value in the clubhouse and in the community is tough to measure because he is certainly one of the major leaders on a revamping Rangers roster.

All this said, I think the Rangers would have preferred to have kept their guy in Nelson Cruz and not felt like they had to move on if you had asked them in late July of 2013. The PR nightmare of Cruz’s positive test of PEDs with a fanbase that’s easily triggered (see Josh Hamilton’s “Baseball town” comments) was going to be tough to come back from. Pair that with another disappointing finish to the 2013 season and it was clear the Rangers needed to make some changes to this floundering core.

There is no bold proclamation that keeping Cruz would’ve led to a World Series sometime over the last seven years. Ron Washington still resigns under iffy circumstances. Prince Fielder still would’ve been forced to retire due to injury. Pitchers like Derek Holland, Matt Harrison and Tanner Scheppers still don’t have the careers they’re projected to back in 2013. Some similar version of what happened in October 2015 and 2016 could still have played out.

It would have been really fun to keep someone like Nellie around through it all. With him still being an All-Star worthy slugger in 2020 at age 39, it would have been an intimidating middle of the Rangers lineup with him and Adrian Beltre through the middle of the decade. Perhaps an eventual 3-4-5 with Beltre, Cruz and Joey Gallo.

I can’t pretend to know what exactly would have happened if Nelson Cruz wasn’t suspended back in August 2013, but I know a couple things would have been much different.