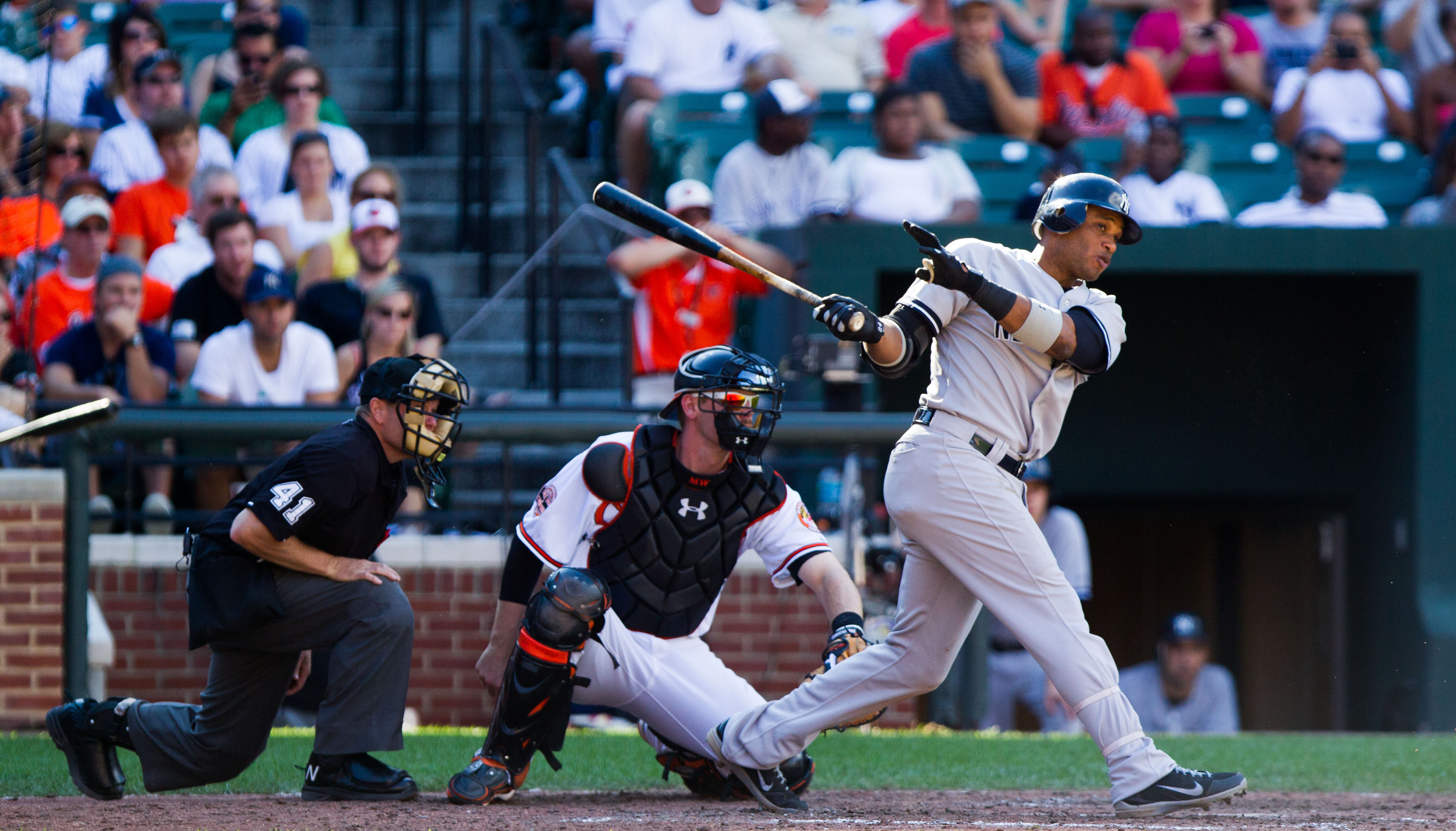 Rangers What If: What if Texas acquired Robinson Canó in the 2003 Alex Rodriguez trade?

Rangers What If: What if Texas acquired Robinson Canó in the 2003 Alex Rodriguez trade?

As a Texas Rangers fan, life is full of vague “What if’s?”

What if Nelson Cruz makes the putout in right field in Game 6 of the 2011 World Series? What if Nolan Ryan had never come to the team in the twilight of his career? What if Josh Hamilton doesn’t drop an easy putout in Oakland in 2012?

In this exercise of misery, there’s one scenario that many fans miss: What if Texas acquired Robinson Cano in the infamous 2003 trade that sent Alex Rodriguez to New York?

In order to answer this question, it’s important to look at Rodriguez’s brief but consequential stop in Arlington. After burgeoning into a star in the early 2000’s with division rival Seattle, A-Rod singed a then record 10-year, $252 million contract to become a Ranger in 2001.

Even with such an unprecedented financial commitment, the move was seen as a win for Texas. For a franchise struggling for notoriety, acquiring a national superstar put eyes on the team.

Fast forward to 2003 and, three All-Star nods, an American League MVP Award in 2003 and countless locker room fiascoes into Rodriguez’s 10-year deal, the team traded him to the New York Yankees.

Rodriguez became a problem for a Texas team that had a multitude of them to deal with. Owner Tom Hick’s financials put the team in jeopardy. The pitching staff couldn’t keep the ball in then-Ameriquest Field. The Rangers never finished above .500 in his three seasons with the team.

Ignited by the intensity of the famous seven-game ALCS bout between the Yankees and Red Sox that offseason, Rodriguez approached then-Rangers General Manager Jon Hart about a trade. According to Hart, Rodriguez came to Texas to win, and when, largely because of his hit on the team’s payroll, it couldn’t put talent around him, he wanted out.

Coincidentally, Rodriguez put Boston and New York at the top of his list for trade targets. The Red Sox were a clear early favorite and even met with Rodriguez in December 2003 to attempt to re-work his albatross contract to make the numbers fit.

This trade benefited Texas, too. Despite a diminished return as a result of not taking on any of Rodriguez’s salary, a trade was set in principle along with the Chicago White Sox to send Magglio Ordoñez to Boston, Jon Lester to Texas, Nomar Garciaparra to Chicago, and Rodriguez to the Red Sox.

Rodriguez wanted to be in Boston and the Red Sox wanted him too- but there was still a final hurdle to jump through- one that’s making headlines in June 2020. The Major League Baseball Players’ Association was famously weary early on in Rodriguez’s Red Sox negotiations, fearing the kind of precedent one of its predominant stars re-negotiating a contract would set, and denied the re-worked deal.

Alas, the trade fell through. Rangers management was forced to wait through quiet Winter Meetings and early offseason.

It didn’t last for long, however. Game seven hero, fan-favorite and current Yankees manager Aaron Boone infamously tore several ligaments in his knee playing a game of pickup basketball. New York was already set at Rodriguez’s natural position, shortstop, with Derek Jeter, but suddenly had a hole at third with Boone’s injury.

Almost immediately, the Yankees locked in an attempt to capitalize off their rival’s misery. Hart contacted Yankees GM Brian Cashman in mid-January 2004, and former offers began to take shape.

Cashman centered a deal around utility man Alfonso Soriano. Soriano was a bright young player for the Yankees, and ended up putting together a strong two seasons in Texas. Along with him, New York presented a shortlist of prospects Texas could choose from to complete the deal.

Texas ultimately ended up choosing Joaquin Arias, an infielder prospect with a defensive upside. Arias didn’t amount to much in Texas over parts of three seasons, and retired with a 0.9 wins above replacement in 474 games.

It’s not known who some of the other options Texas was given, save one: Infielder Robinson Cano.

Cano, one of the the game’s most recognizable figures with the Yankees, developed into a star in the Bronx. Over seven seasons with the team, he played 1,374 games, hit 204 home runs, and made the All-Star team five times. He signed a massive deal with Seattle in 2014, and currently is in the twilight of his career with the Mets.

Knowing this information likely irks Rangers fans, but it also probably makes many ponder: what could’ve been if Texas would’ve picked Cano?

Thinking back to the Texas teams of the late 2000’s and 2010’s, the team was set at second. Future Ranger Hall-of-Famer Ian Kinsler dominated at the position, recording two 30-30 seasons along with a pair of All-Star nods.

Late in his Ranger career, Kinsler was publicly disgruntled with Rangers management for rumored moves to first or third base. It would’ve been hard for the team to find a spot for Cano- especially with Michael Young’s shard resentment for switching positions.

On the other hand, Cano played 14 games at first base in 2018. He didn’t really add anything defensively, but proved he could at least man the position at the major league level. If the Rangers moved him to first early in his career, instead of Kinsler and Young, it would’ve formed an offensive power envied by all of the league.

For hypothetical’s sake, let’s say that Cano comes up with the Rangers in 2007 and plays first. That means he’s a part of the famous 2010 and 2011 playoff runs. Comparing some of his numbers with actual starter Mitch Moreland certainly grabs your attention. Moreland strung together a 4.9 WAR in six seasons in Texas, while Cano put together an unbelievable 46.0 WAR over that same span.

Furthermore, the team would’ve been much better served to have him in the lineup in its consecutive trips to the Fall Classic. Just look at what he did against the Rangers alone in the 2010 ALCS- he tore into Texas pitching to the tune of a .348 average, 4 homers and 5 RBI.

In 2010, the Rangers had heroic pitching performances, but could’ve used that offensive boost against vaunted San Francisco pitching staff. In 2011, maybe Cano’s bat could’ve made the difference in close losses in Games 1 and 3.

But, for all Cano’s hypothetical upside, there are several downsides to consider as well.

If the Rangers had Cano in 2011, would they still have pursued future Hall-of-Famer Adrian Beltre, who saw his best days as a Ranger? Furthermore, it’s worth noting that Cano didn’t finish his career as a Yankee. He likely would’ve still chased a payday in his free agency, and a Texas team still recovering from the financial implications of the Rodriguez deal wouldn’t likely give him one. He’s also missed significant time over the past five years.

Elsewhere, Cano was hit with an 80-game performance enhancing drug suspension in 2018. Could a Rangers team trying to repair its image from the tainted steroid era Rafael Palmeiro, Rodriguez and awkward substance abuse problem with manager Ron Washington afford to take another shot at its reputation?

The Rangers ate 8.4 million dollars every year through 2011 as part of the Rodriguez trade. When you consider the fact that the team didn’t acquire Cano in the deal, it basically means that Texas was paying $84 million dollars for two superstars not to play for them. Two superstars that would win a title in 2009, while Texas swung and miss twice in a path for an elusive first World Series Title it’s still chasing.