Tonight during the Rangers Winter Warmup, Michael Young stood up on the podium to make a big announcement for the franchise. The great Adrian Beltre will have his number 29 retired in the Rangers organization. Beltre will join Nolan Ryan, Johnny Oates, Ivan (Pudge) Rodriguez, and Jackie Robinson (MLB-wide) as the only numbers retired in the Rangers organization. The club announced that the retirement ceremony will likely take place in June. However, an official date has not been announced. Typically, these events take place on a Saturday evening so if the ceremony is in June, the likely dates would be June 8th vs Oakland or June 22nd vs the White Sox. 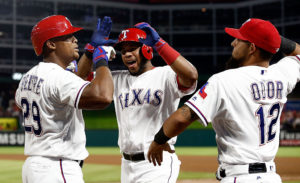 Adrian played in eight seasons for the Rangers before officially retiring on November 20th, 2018. In his eight seasons, Beltre racked up over 1200 hits, 199 homers, and hit over .300. Adrian also racked up three gold gloves, and two platinum gloves, at third base in a Rangers uniform. In addition, Beltre won two silver slugger awards in 2011 and 2014. It wasn’t the stats that drew Rangers fans, and players, to Beltre. It was the leadership and the sheer peasantry he had in playing the game he loved every day. In an interview done back in November during AB’s retirement, WFAA’s Mike Leslie asked both Joey Gallo and Ronald Guzman about Beltre. Gallo stated that Adrian “Is a once-in-a-generation type player. He embodied what a Texas Ranger is.” Ronald added later that, “He always looked like he had fun on the field, that’s the one thing I learned from him.” Here is link to the live interview with Gallo and Guzman.

Fans can make a top five, ten, even twenty, list of favorite Beltre moments. From the energetic bulrush around the bases to throwing the glove at Elvis. We all can’t forget the infamous ejection by Gerry Davis in late July of 2017 against the Marlins. It was those moments that kept Adrian in the hearts of fans and brought the smiles to the organization, internally and externally. Finally, nothing would top a Beltre moment more than the constant head rubbing attempts by teammates and his signature one-knee shots over the wall. All these moments signify one thing, a man who loved the game of baseball no matter the circumstances. Regardless of the outcome of the day, and no matter how Adrian performed, there was always one constant. That smile on his face and the fun he had before, during, and after the game.

Adrian Beltre will always be a part of this organization, and the staple smile posted all throughout the clubhouse. He is one of the most treasured gems in Rangers history and even the Major League Baseball history. The stories that Mariners broadcasters Dave Sims and Mike Blowers tell every time Adrian comes to bat signify what he meant even during his time in Seattle. He was one of kind and brought the best out of everyone, even department stores (looking at you JC Penny).