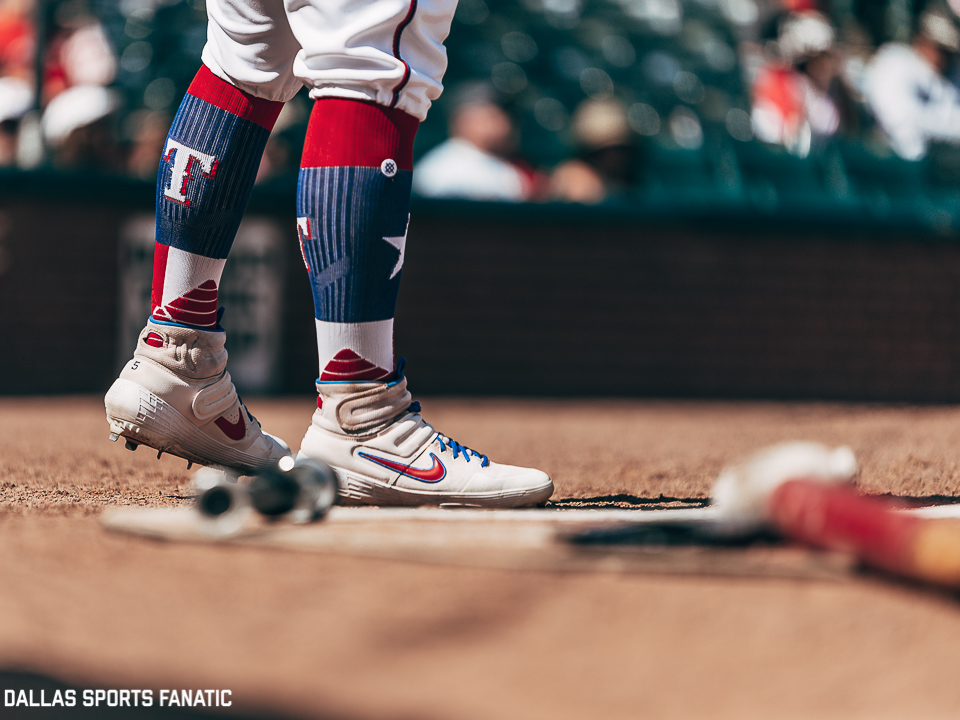 Rangers youth making their mark in the big leagues

Rangers youth making their mark in the big leagues

The Rangers organization is getting a taste of their young talent on the bump and in the batter’s box throughout the series against the Los Angeles Angels. On Monday, Texas sent twenty-two-year-old Kolby Allard while on Tuesday came Brock Burke and Joe Palumbo, the latter having made a couple starts for the Rangers in 2019. Add in the bullpen, Clause, Gibault, and even LeClerc who has a couple of years under his belt. On the offensive side, guys like Jose Trevino, Scott Heineman, and now Nick Solak are getting opportunities to flourish in the big leagues.

“That’s our future.” Chris Woodward said before the game one Tuesday. “I have full faith that we are going to win a lot of games with these guys. I don’t care what people say, oh they’re young, they’re rookies, I don’t care. I love that. These guys are ready to play. As long as their willing[ness] to learn to get through the ups and downs of big leagues, I love putting them out there.”

Recall back to Spring Training, the Rangers rotation included Mike Minor and Lance Lynn but also pieced Edinson Volquez, Shelby Miller, and Drew Smyly. A rotation that as of now accumulated 1,047 career MLB appearances. At this moment, if you add the combination of Brock Burke, Joe Palumbo, and Kolby Allard with Mike Minor and Lance Lynn, there are 477 career MLB appearances between them (469 of those are Mike Minor and Lance Lynn). The moment became surreal for each individual. Brock Burke talked before Monday’s game about the emotion on getting the opportunity in the big leagues. “It was cool to come in; I don’t really think it hit me cause with all the travel and getting here and figure everything out, I kept busy.” Burke added, “I kind of sat down here and started taking it all in.”

It was a glass half-full and half-empty feeling Tuesday throughout the doubleheader. On the plus side, Brock Burke did something only three other Rangers accomplished, pitched six or more scoreless innings in his Major League debut. Burke joined Glenn Cook (1985), Roger Pavlik (1992), and Brian Sikorski (2000) by pitching six innings of four-hit shutout baseball. On the other hand, Joe Palumbo left game one of the doubleheader in the second inning. Palumbo suffered a blister on his left thumb and the Rangers placed Joe on the 10-day injured list immediately following the first game.

*heads to dugout and pulls up résumé on laptop*

"Struck out Mike Trout in MLB debut"@BrockBurke1 is ROLLING through 3 innings with the @Rangers 👏#TogetherWe pic.twitter.com/btnchXzj1H

Monday’s comeback victory against the Angels showed the potential the Rangers have with their youngsters. Despite a six earned run line for Kolby Allard, he battled for three scoreless innings to end the night. Allard talked after Monday on his resilient approach. “Obviously when you do have that rough of a first-inning, you really have two options, and that’s too kind of rollover or go out there and battle your ass off.”

Kolby Allard on what was a resilient start tonight considering a struggling beginning #rangers pic.twitter.com/jh6odvW6Tf

However, Monday’s victory included some big league firsts as well. Scott Heineman picked up a two-run double in the fifth inning, marking his first career MLB RBI along with Jose Trevino belting his first career big-league home run and a walk-off run scored. Jose talked before Tuesday’s game one on his home run milestone. “It felt good. Wasn’t really thinking anything at the moment, I wanted to win, and I wanted to come back. That was probably the main thing. I liked the fireworks; I was looking forward to hearing the fireworks.” The Rangers are also experimenting defensively with Scott Heineman at first base. I asked Scott prior to game two if the comfort at first base is there. “It was just getting the repetition of ground ball work and everything like that. I feel pretty comfortable in terms of knowing where to be and when to be there.” Heineman added, “It’s just the repetition of getting consistent ground balls and then I’ve had a lot of help with guys who played first up here and the coaching staff obviously for the past two days helping me get the reps I need and tell me how to approach it.”

It's a night of firsts as @ScottHeineman's first two career RBI cuts even further into the Angels lead!#TogetherWe | @Rangers pic.twitter.com/qZNl8tZPy6

The Rangers get a first look on Tuesday at Nick Solak. The Rangers acquired Solak in mid-July from the Tampa Bay Rays for Peter Fairbanks. Nick is a versatile player that can play at second base and in the corner outfield positions. Chris Woodward mentioned Tuesday that he wanted to give Solak some work at third base. The organization raves about Solak’s uses the middle of the field with a lot of power and an excellent knowledge of the strike zone.

Nick Solak on being a part of the #Rangers culture #togetherwe pic.twitter.com/iOxJb2LZ8A

The future is bright for the Rangers organization, and everyone is on board to see the direction the club is going. I talked to Shawn Kelley on Monday about the young starters on the mound getting their chance, “I think it’s good. It’s an opportunity to show what they got, and maybe somewhat of an audition on who’s going to have a heads up next year coming into the spring.” Kelly said, “This is big for them, but for us, the guys in this group and this locker room right now, they can give us good quality long starts so we can win ball games.”

I’ll leave you with this last bit from Chris Woodward, “They’re our future, they’re the guys that hopefully, we’ll win a championship with. We need to get them involved in our processes, our meetings, and our culture. Start that belief now that we’re going to win it.”