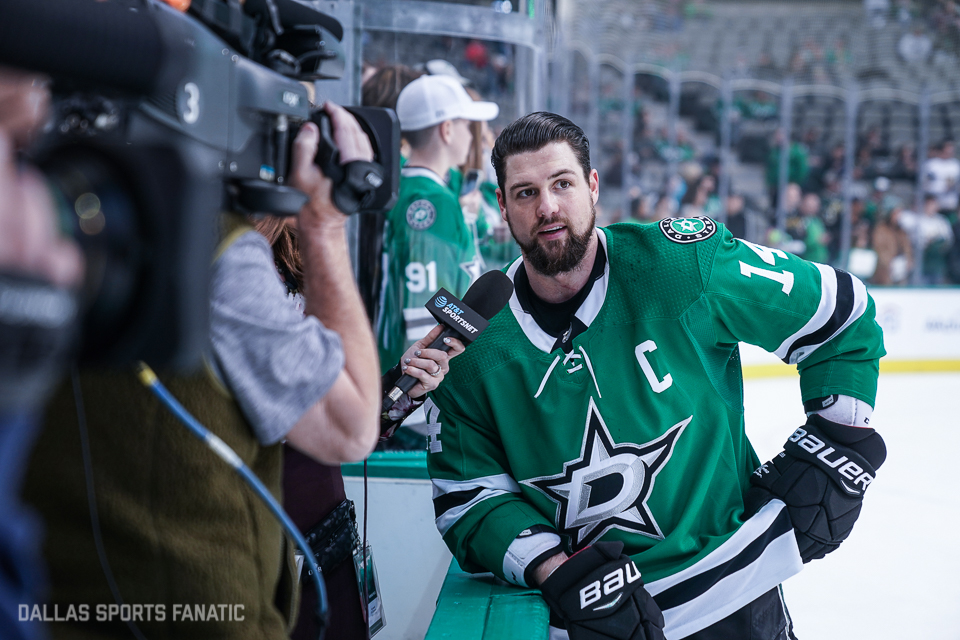 Knights Oust the Stars in the First Game of Round Robin

Knights Oust the Stars in the First Game of Round Robin

The Stars began their round robin series against an extremely tough Las Vegas Golden Knights team.  Dallas went 2-6-1 against Vegas in the nine meetings since the Knights’ induction to the league, and they split two regular season games this year.

It’s no secret that Vegas is an explosive team and the Stars needed to play their sound defensive game to limit their scoring opportunities.  Although Marc-Andre Fleury is the Knights’ starting netminder, they started Robin Lehner in net.  Ben Bishop started in net for the Stars.

For those who might be a tad confused with the round robin games, the top four teams in each conference play eachother each one time.  After the four games, the seeds are redetermined based on the results of those games, essentially giving each team the opportunity to be the first seed.

The scoring opened up quickly as Chandler Stephenson scored on the Knights‘ first shot of the game.  Bishop was screened by John Klingberg, and a sneaky shot bounced between his legs.

Although the period started rough for Dallas, they controlled the play, leading in shots and hits.  The first concluded 1-0 in favor of Vegas.

Dallas picked up right where they left off, applying pressure in the offensive zone, while quickly breaking up the Knights’ offensive rushes.

The Stars fnally opened up the scoring after a fortunate bounce off of Alec Martinez’ foot.  Mattias Janmark dropped a pass back to Joe Pavelski, who then tried to center the puck, and the puck bounced off the defender’s skate and in.

Jamie Oleksiak quickly threw another puck in the back of the net after Blake Comeau sent a beautiful backhand pass into the slot, and the big rig ripped it home.  The goals came 42 seconds apart.

The Stars had the Knights running wild, when Shea Theodore took a hooking penalty.  Dallas applied strong pressure and just before the power play ended, Corey Perry tipped in a shot from Miro Heiskanen, to increase the lead 3-1.

While Vegas tried to apply some pressure after the third goal by Dallas, they would be unable to come up with anything, and the period ended in favor of the Stars, 3-1.

Vegas continued to apply strong pressure for the first half of the period, until Mark Stone was able to go bar down and cut the lead to one goal.  He receievd a pass on the blue line and split the Stars’ defense, to rifle one past Bishop.

Very shorly thereafter, Lindell broke his stick, which resulted in an odd man rush for Vegas.  John Klingberg tipped a pass that happened to bounce to the Nate Schmidt who was trailing the play, who beat Bishop, tying the game at three a side.

The Stars were stopped dead in their tracks, as they continued to make turnovers in their own zone.  Just when it looked like Vegas scored the go ahead goal, the refs reversed the goal under the ruling of “goaltender interference.”

The Golden Knights then challenged the call, which resulted in the refs taking a second look at the play.  The refs then overturned their original call and ruled it a goal.  The score was 4-3 in favor of Vegas, with just over five minutes remaining.

Las Vegas would come away with the win, after an empty netter, leaving the score at 5-3 over Dallas.

The overturning of the call was a surprising one, as the official definition of goaltender interference is, “when an attacking player, either by his positioning or by contact, impairs the goalkeeper’s ability to move freely within his crease or defend his goal; or (2) an attacking player initiates intentional or deliberate contact with a goalkeeper, inside or outside of his goal crease.”

Bishop was not only in his crease, but he was interfered with by the Vegas forward, loosing his stick.  The official ruling does not exclude plays when the goalie is not in net even, so it will be interesting to hear the explanation moving forward.

If the call would not have been overturned, the Stars would have had a power play and another chance to score, but alas, they would lose the game.
Related TopicsBen BishopChandler StephensonCorey PerryDallas StarsfeaturedJamie OleksiakLas Vegas Golden KnightsMark StoneRobin Lehner