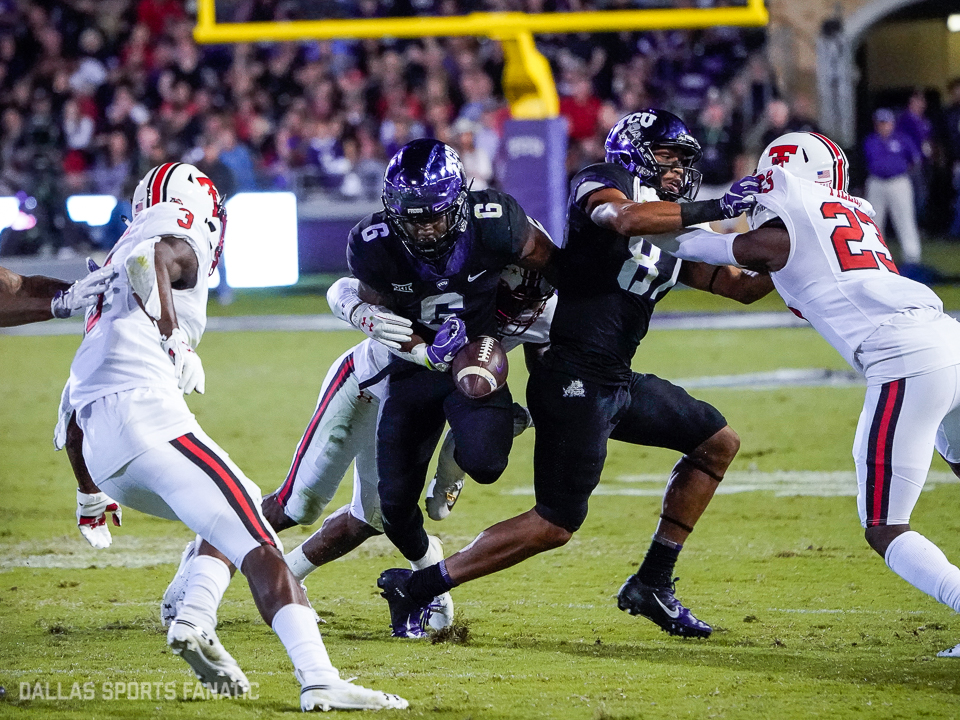 In the 61st meeting between TCU and Texas Tech in the battle for the ‘Saddle Trophy,’ the Red Raiders rallied late to hand TCU a 17-14 loss at Amon G. Carter Stadium Thursday night.

Almost four-years from the moment when TCU put up 82 points in a 82-27 win over the Red Raiders in Fort Worth, coach Kliff Kingsbury was just happy to see his team win the battle late in the matchup.

“They have that road-warrior mentality,” Kingsbury said postgame. “They play tough against everybody on the road and they did a nice job and they had some good mental focus on the road.”

Texas Tech’s questions at the quarterback position were warranted in the first half as the offense struggled to find a rhythm with Jett Duffey behind center. The TCU defensive line was dominate throughout the first two quarters behind strong play from reigning Big 12 Defensive POY Ben Banogu.

Tech settled for an early field goal but was held quiet for the remainder of the next few quarters. Meanwhile, TCU pieced together a methodical drive that capped off with a 20-yard pass from quarterback Shawn Robinson to Waxahachie product Jalen Reagor to take a 7-3 lead into the half.

However, after only having 3 points into the halftime break, the Tech offense struck gold on a 62-yard strike from Duffy to Ja’Deion High to take a 10-7 lead into the 4th quarter. High talked about the play postgame and what the Red Raider sideline saw.

“We were running tempo and wanted to get up to the line,” High said. “We saw the safety creeping up and we stacked the right side of the field and they just let me go.”

For TCU, Robinson saw his only start of 2017 end in a 27-3 win over the Red Raiders in Lubbock but struggled to find any time to throw after the Red Raider defense turned up the pass rush in the 3rd.

After the initial struggles in the second half, Robinson did find KaVonte Turpin on a post route in the middle of the end zone to take a 14-10 lead with 10:59 remaining. A dangerous throw that had Frog fans nervous before it came to rest in Turpin’s grasp.

Texas Tech had a promising drive derailed by a couple sacks from the Horned Frog defensive line but held TCU defensively and benefited from a 13-yard punt from the Frog’s special teams.

On the first play of the new drive, Duffy took off from the TCU 38 on a busted play and spun his way into the end zone to give the Red Raiders a 3-point lead with 7:02 left.

TCU had their chances late to climb back into the game but the Tech defense, led by Kolin Hill, and Jordyn Brooks, stood strong and forced a punt. After an unsuccessful Red Raiders offensive drive, the Tech defense forced the Frogs to a 4th and 1 from the TCU 47.

From the shotgun, the right-handed Robinson rolled out to his left, shook off a would-be sack and reversed field looking to gain that one-yard. The Tech pressure closed in and while trying to switch hands for a desperation heave, Robinson bobbled the football and Texas Tech was there to reel it in.

A couple kneel-downs from Jett Duffy and the Red Raiders closed out their second win in three meetings between the two rivals.

Texas Tech forced three turnovers in what was a sloppy game offensively for TCU overall. The Horned Frogs finished with 411 total yards including a 26-45 night, and 290 yards passing from Robinson.

Banogu defensively finished with two sacks and eight tackles overall while coach Gary Patterson may be up late tonight thinking of the big-plays the secondary allowed in the second half.

TCU was receiving votes in the top 25 heading into the matchup but that will not be the case after falling to 3-3 overall and 1-2 in Big 12 play. Tech on the other hand improves to 4-2 overall and 2-1 in conference play.

TCU will look to rebound with a couple extra days to prepare for Oklahoma who comes to town on Oct. 20. Kickoff is TBD from Amon G. Carter Stadium. Texas Tech will face Kansas the same day with a legitimate shot to improve to 5-2.