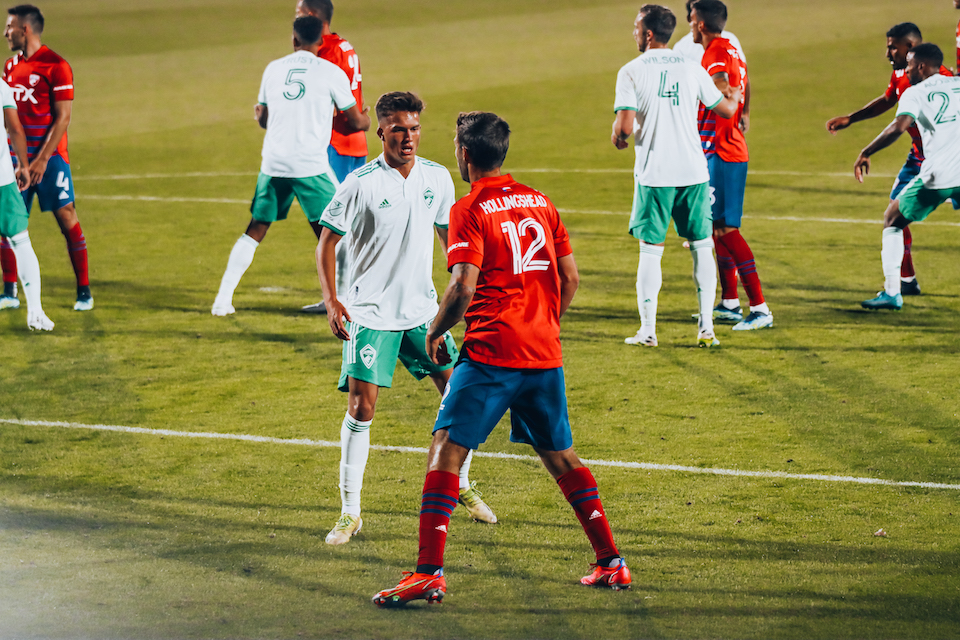 Ricardo Pepi shines to give FC Dallas a much-needed win

Ricardo Pepi shines to give FC Dallas a much-needed win

FC Dallas was out looking for a much-needed win following their loss on the road against LAFC this past Wednesday. FC Dallas faced for the first time this season a team from the Eastern Conference. The last time these two sides met at Toyota Stadium, the game ended in a 1-1 draw for their 2019 MLS Home Opener.

Following Pepi’s goal, New England was more threatening upfront; however, Jimmy Maurer again would pick up several saves to deny them. It wasn’t until Gustavo Bou would get the visiting team the tie.

Ricardo Pepi would steal the show again in the second half as he put his team up front for the second time on Sunday night. After a tremendous individual effort followed by a pass by Ryan Hollingshead, Pepi took it up for himself to dribble past three players before firing his shot past Matt Turner’s goal. The goal was Pepi’s fourth of the season.

THE RICARDO PEPI HYPE TRAIN HAS LEFT THE STATION!

“Pepi, is a young player, but he showed he can play big when he needs to. I’m really proud of him and I think it’s his first two-goal game at this level and it’s another start for him.”

“It’s a great feeling. I feel like this was needed for the team. First I want to thank Jesús and Ryan, they did most of the job and the team did too, I just had to put it away. But it’s a great feeling, the team needed it and we’ll keep going forward.”

Both Ricardo Pepi and Facundo Quignon suffered injuries in the game that would see them come off. As a result of those injuries, Luchi brought on Franco Jara and Edwin Cerillo to cover their respective spots. Paxton Pomykal also saw some minutes replacing Jesus Ferreira. Both who were substituted as a precaution ahead of their upcoming games.

“We knew it was going to be a huge challenge and a hard challenge. I thought we did set the tone at the beginning and we matched them in certain ways. We created some chances first. Then, they got back into the game with a fast attack transition.”

Jesus Ferreira also commented on the team’s and individual performance:

“We knew that today was an important match, especially at home. So, I had to adjust. It’s a role that I’ve been playing lately and today I had to show out. I think today I came out and did the best with the opportunity that I got and that was the game plan for today.”

FC Dallas now sit at the eleventh place of the Western Conference above Austin FC and Vancouver. Following their second win of the season, FC Dallas returns to Toyota Stadium on July 4 as they host Vancouver (2-2-6). Following their game at home, they’ll have three consecutive games on the road against LA Galaxy, Portland, and Colorado before returning to Toyota Stadium on July 24, where they’ll face LA Galaxy again.