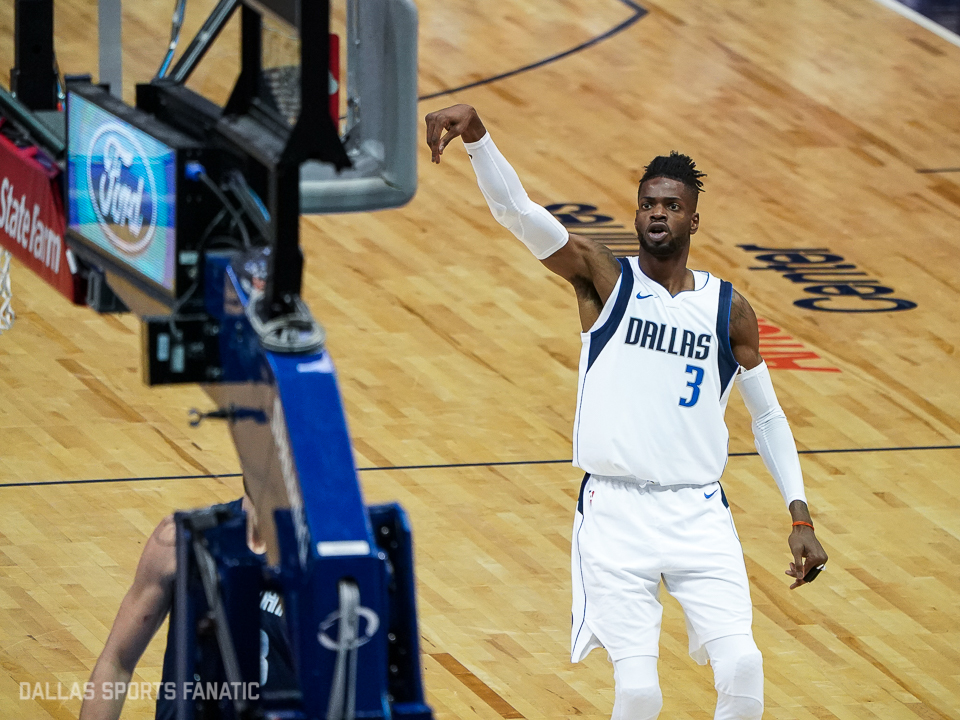 Roundtable: What is up with Nerlens Noel’s playing time?

Roundtable: What is up with Nerlens Noel’s playing time?

After a disappointing 1-4 start to the season in which the Mavs have lost to beatable Kings and Hawks teams as well as losing by 30 to the Warriors and 16 to the Rockets, many Mavs fans are asking the same thing: What is up with Nerlens Noel’s playing time?

Cunningham: Look, there’s solid empirical evidence that Nerlens Noel is producing at a very high level while he’s on the floor. Per 36 minutes, Noel is averaging 17 points, 14 rebounds, almost 3 blocks and 2 steals while making 72% of his shot attempts. Stretch that out over an entire season and you have a top-5 center in this league who is just 23 years old. Any team in the NBA would kill for that!

Arguing the numbers here is repetitive because the case is already closed. Noel deserved more than 12 minutes against the Warriors (regardless of whatever “matchup” deficiency Rick Carlisle is referring to). The point is the rhetoric regarding Noel at the point of the trade last year has only been exceeded in excitement by the acquisition of Dennis Smith Jr., the Mavericks’ point guard of the future. Why aren’t you starting your supposed “foundational” center?

Look, I’ve been in the locker room. Noel is a quiet, introverted guy but he’s clearly frustrated or, at the very least, baffled by this. There’s no “bad blood” between anyone and Noel (in fact, Smith has referred to him already as his “favorite roll guy.”) Also, the fact that Noel has publicly played the “team-first” card is notable given that he’s been vocal about playing time discrepancies with Philadelphia in the past.

When Donnie Nelson uses words such as “Tyson Chandler starter-kit”, that isn’t to be taken lightly. Carlisle himself said that Noel would “eventually” be the starting center for Dallas and maybe now we’re starting to see the “eventually” aspect play out, even if it seemingly goes against what everyone thought Dallas had planned for Noel to begin with.

There’s a lot of conspiracy theories out here surrounding this because of how passionate the fan base feels about it. No, Rick Carlisle isn’t “exacting vengeance” or “making Noel pay” for turning down Dallas’ long-term contract offer this summer, but when you opt to play Dwight Powell for longer than Noel, you leave yourself open to even the most erratic of speculation.

Noel himself said after Monday’s game that he “thinks he and Dirk could work well together.” Look, there is some basketball logic to Dirk starting at the center position (the fear is that having him in a sixth-man role, regardless of whether Dirk deserves to be “reduced” to a bench role or not, would make him stiffer when he got on the floor). That’s fine. But Dirk is a sieve on defense and has never been an effective rebounder, especially not now with father time finally showing its face and the “big mummy” looking stiffer and slower with each passing game.

I firmly believe Carlisle will see the light here soon and ultimately switch to Noel as the starting center or, at the very least, give him more run. The reasons to *not* start Noel over the reasons *for* starting him just won’t stack up in the long run. It’s worth realizing that we’re four games in, and it’s far too soon to jump to any conclusions.

Mulford: When it comes to the Noel situation, I completely agree with Mike Fisher. It is “embarrassing and ridiculous” to say that Noel isn’t getting more minutes because “it’s a shooters game”. But what happens when shooters miss? You need to rebound. And who’s the the best rebounder and interior defender on the Mavs? I think he goes by the name of Nerlens Noel.

I understand the prospects of starting Dirk alongside four playmakers and shooters, but the rebounding and interior defense takes a huge plunge. With Nerlens in the lineup, he can step out and defend on the wing while manning the paint and the glass. In the next seven games, the Mavs will face Marc Gasol twice, Joel Embiid, Rudy Gobert, Blake Griffin/DeAndre Jordan, Boogie Cousins/Anthony Davis, and Karl Anthony-Towns. And we want to talk about shooters? If Noel doesn’t see more floor time against these big boys, then there’s a definite internal problem there between Carlisle and Noel.

No one liked how the contract talks went down between the Mavs and Noel this summer more than Noel. The chip on his shoulder only got bigger after not receiving his desired contract. I’d say he’s more confident and motivated than ever to perform so since I know you’re reading this Coach Carlisle, play the man more minutes.

Lewis: Is it time for the winless Mavs to #FreeNerlens? I know he stuck it to the team this offseason by turning down a long-term deal reportedly worth around $70 million. But we are still just FOUR games into a long 82 game season. Carlisle often speaks of “staying the course, ” and this may be one of his classic examples. He and his staff are well aware of Noel and his on-court production early into this season. It’s not hard to miss Noels per-36 minute stats: 17 points on 72 percent shooting, 14.1 rebounds, 2.4 blocks, and 2.9 steals. For Mavs fans, patience is essential during this “rebuild process.”  I don’t have any doubt that Noel will get his opportunity sooner rather than later.

Rathbun: Although I do not think the teams response to Noel’s seemingly dwindling playing time is “embarrassing”, I do think that it is slightly ridiculous. I understand that you have to play the match-ups but in what NBA is Dirk or Dwight Powell a better option on defense then Noel? The answer is none. Nerlens Noel is the Mavs best defensive player (outside of Wes Matthews) by a large margin. Per Basketball-Reference, Noel has the team’s best defensive rating at 102, the best offensive rating at 136, and ranks 1st in total rebounds, offensive rebounds, steals, and blocks. Yet he comes in at 7th in minutes played for Dallas.

The Mavs are currently ranked 26th in the NBA in total rebounds per game at 40 per game. They are 19th in offensive rebounds and 26th in defensive rebounds. They have been out rebounded in every game this year. In terms of steals per game, the Mavs are ranked 19th at 7.5 per game. Dallas is averaging 2.8 blocks per game, good for 26th in the NBA. The point? Dallas is currently towards the bottom of the NBA in all of these of the categories yet the best player they have on their team at doing these things, Nerlens Noel, is 7th in minutes played. Match ups or not, if you want to improve as a team on the things that you are bad at, you put the players who are best at those things in a position to succeed. For Noel this means more minutes, plain and simple. Another interesting stat: Dirk is almost 40 years old and is averaging 7 more minutes (25) than Noel (18), who is 23 years old.

Scrolling through NBA and Mavs twitter I have seen tweets that Noel’s low playing time is a “conspiracy” or “retaliation” to him turning down the Mavs offer this summer. It is easy to fall into this thought, especially after opening up the season with four straight loses, but I do not think the Mavs are out to get Noel. Instead, I find it odd that we are hearing quotes from Coach Carlisle about match ups and the NBA “being a shooters game now” as an excuse for his low minutes, especially in response to the 12 minutes Noel played against Golden State. Only a few months ago the Mavs were offering Noel $17.5 million per year. Why even offer that much money to him if the team truly believes he can only be effective in certain match ups and in limited minutes?

The NBA and Mavs fans know how great of a coach Rick Carlisle is. He is a mastermind at mid-game adjustments and drawing up plays out of the time out. With all his brilliancy, I can’t help but think that maybe Coach Carlisle is just over thinking this thing? After all, you need someone to collect those rebounds that all the shooters in this “shooters game” miss. You need someone to be a presence in the paint for when those shooters decide to take it inside. And you need someone’s long arms and hands to disrupt and cut off those passing lanes across the court to the 3 point line. Who better to do this on the Mavs than Noel? Nobody. That’s why Noel needs more minutes and I believe (hope) that Carlisle will come to this realization and we will see Noel’s minutes increase. If not, buckle up Mavs fans its going to be a long season with more L’s than W’s.

Reese Konkle: This entire situation has to be frustrating for everyone involved. This notion that Nerlens can’t play more than 20 minutes because of “matchups” is outlandish. And that’s what worries me, because I know Rick knows that. There is simply no logic in keeping what has been your best, most impactful player off the floor for the majority of the game. So it makes you wonder…Is it something personal? The Mavs and Nerlens are too classy to make that a public endeavor, but it is very possible. Either way his rim protection and rebounding are needed in the worst way, so him getting more minutes is essential. He is just too good a player to have him glued to your bench.

We are only four games into this year, so this could be a non issue by season end. But given his impending free agency, it is something that needs to get fixed, because letting a bright young talent like Noel walk for nothing would be devastating.