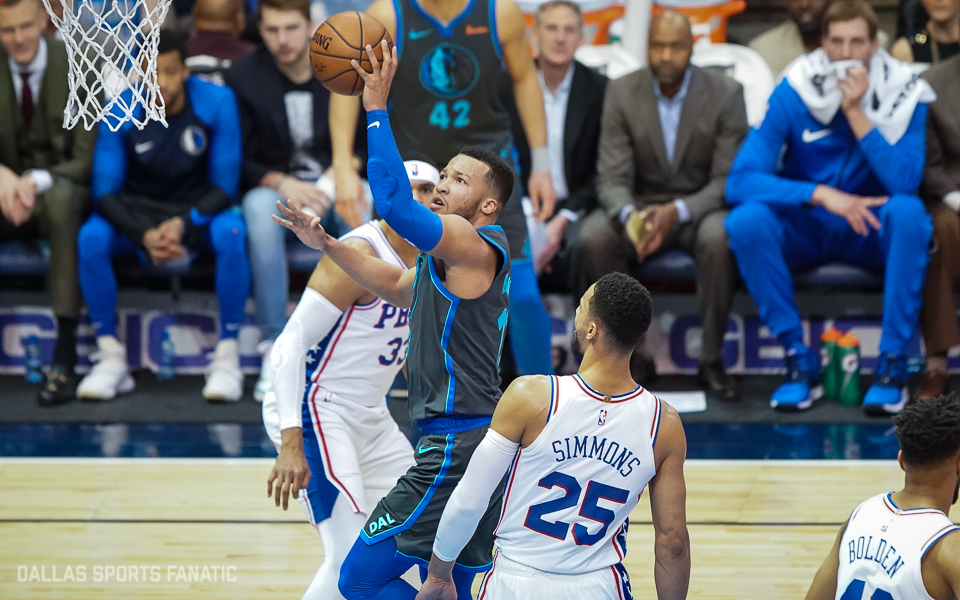 Several Mavs are well aware of the “Madness” of the Tournament

Several Mavs are well aware of the “Madness” of the Tournament

As the final few days of this year’s NCAA Tournament get underway with the Final Four in Minneapolis this weekend, NBA players around the league are likely reliving the memories of their time in the Big Dance.  It’s a unique three-week stretch that creates some of the craziest and best jump-off-your-couch moments for us as fans, so it has to be incredible to be a part of as a player or coach.

Mavericks rookie Jalen Brunson put it best whenever he recently joined BaD Radio of 1310 The Ticket in Dallas.

“March is definitely one of the best times of the year because of the intensity of college basketball.  The excitement, the intensity, the “what if’s” – you never know what’s going to happen.  Just being a part of that for three years was pretty special.  It’s something that I’ll cherish forever.”

The current Mavs roster is absolutely chocked full of players who made noise in the NCAA Tournament in recent years.  The two that stand out the most would be Brunson, whose Villanova Wildcats won both the 2016 and 2018 National Championships, and second year wing Justin Jackson, who cut down the nets with the North Carolina Tar Heels in 2017.  The pair may be teammates now, but they shared the court for one of the craziest endings to a championship game in American sports history back on April 4th, 2016 at NRG Stadium in Houston.

Even though Jackson would end up winning the title with North Carolina the next season, it still bothers him to this day to have lost that way.  It was just another reminder when he ended being teammates with Brunson after he was traded to Dallas in February.

“He took it from me,” Jackson said with a smile when he met with the local media for the first time after the trade.  Only joking, but it has to still sting a bit.

Other Mavericks know what it’s like to come close to winning it all but coming up just short.  Guards Trey Burke and Tim Hardaway Jr. were teammates on the Michigan Wolverines team that lost the 2013 National Championship Game to the Louisville Cardinals.  Burke led all scorers in that game with 24 points and was sure to appreciate the moment for what it was.

“It was one of the most fun times of my life,” Burke said to northjersey.com last spring when Michigan was once again in the Final Four.  Hardaway Jr., Burke’s teammate on now three different teams (Michigan, the Knicks and now the Mavericks) confirmed.

“A lot of people don’t have that opportunity. A lot of guys can’t say they played in the championship game or in the Final Four in general. Just being a part of that is special.”

Hardaway Jr. is certainly right whenever he says a lot of guys never reach the level he and Burke did.  A lot of guys on his team can’t say that either!

Next to Hardaway Jr.’s locker sits Dorian Finley-Smith.  The third year-forward had an exciting first year on the court at the University of Florida after transferring there from Virginia Tech.  The 2013-2014 Florida Gators made it to the Final Four that was interestingly held at AT&T Stadium in Arlington.  It was a lot to take in for Finley-Smith.

“It’s crazy,” he said before last Monday’s game against Philadelphia. “Everyone’s going one hundred miles per hour for the tournament.”  That Florida team, still under the guidance of the now Oklahoma City Thunder coach Billy Donovan, was a number one seed in their region, but would fall to the eventual champion University of Connecticut Huskies team led by Madness phenom Shabazz Napier that was a #7 seed.

One Maverick that knows what it was like to pull off some magic as a lower seed is veteran Courtney Lee.  In his final season at Western Kentucky in 2008, the Hilltoppers were a #12 seed and managed to make it all the way to the Sweet Sixteen with a buzzer-beater win over a #5 seed Drake in the first round and then a comfortable win over #13 seed San Diego in the Round of 32.

Of course, Courtney Lee holds the memories from those two weeks very closely.  “Those are definitely memories you’ll always have.  I was with a few of those guys for all four years, so we definitely had a bond. I was just hyped about being in the tournament.  It felt like we were finally getting the respect we deserved and what better platform to do that than in the tournament.“

When speaking to various players about their college memories, there’s a universal theme among all of their answers: There’s just nothing like the bond you have with your college teammates whenever you’re playing in March.

“I still talk to the guys I was teammates with when we went to the Final Four,” said Dorian Finney-Smith.  “Just winning in college is hard, but winning in the tournament is real hard.  You go to practice, class… you’re with each other all of the time.  In the NBA, don’t get me wrong, but there’s just a different type of feel.  In college you’re struggling more with them in all aspects of life.”

“Even if you went to the school 20 years before, you feel like a part of that team.”

“In college you’re with each other nonstop,” Courtney Lee said. “Staying in the same dorm or the same housing, traveling with them, having class with them, you’re with each other nonstop. When you come into the league (NBA) now, there’s an age range from 18-40.  It’s different because people start their families. People have their business outside of basketball that they’re attending to.“

While these guys are removed from the brotherhood of those single-elimination tournament games, those in the Mavericks locker room seem to clearly value their time spent in the NCAA Tournament. Whether it be having their old team’s game on the TV in their locker before or after the game or talking trash with each other during the conference tournament, these guys may wear Mavs jerseys now, but they never forget the pride they felt representing their school in the NCAA Tournament.