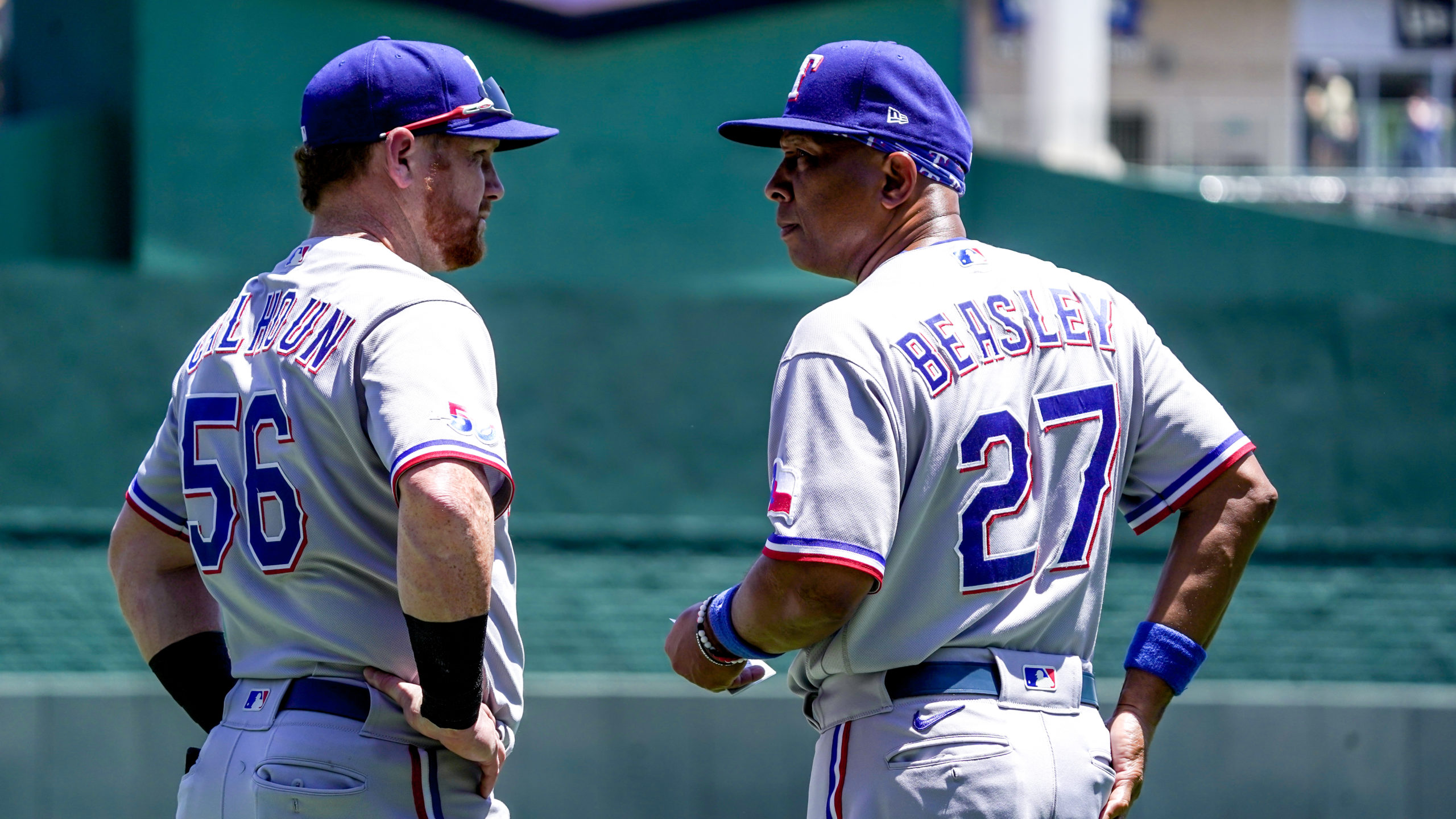 Should the Rangers Consider Tony Beasley as their Manager in 2023?

Should the Rangers Consider Tony Beasley as their Manager in 2023?

While the Rangers search for candidates in two vacancies, Texas may have an option for a new manager, their interim skipper Tony Beasley. Beasley has been with the Rangers since 2015. He was a middle infielder in the Pirates minor league organizations between 1989-1998 (mainly a second baseman, but played shortstop, third, and a little outfield). Then became manager of the Altoona Curve and won the Minor League Manager of the Year award in 2004. Finally going to the Nationals organization, Tony managed the Harrisburg Senators, a Double-A affiliate, in 2011.

Beasley is beloved within the Rangers organization and puts in extra passion and energy daily. “We know that Tony is the right person to stabilize us and help us finish strong here,” Rangers General Manager Chris Young said on Monday. “It’s easy to say everybody loves Beas and the person that he is,” Charlie Culberson told me. “I hope that he’s the same person, and I know he will be, but no one really knows until you’re in that position. I don’t know what it’s like to be a manager, [but] I’m sure it’s tough and you having to manage everybody and personalities from both sides of the team.”

No one more deserving than you ❤️ https://t.co/sf7FBrSDvc

On Thursday, Beasley admitted that he didn’t feel like Tony Beasley for the first three days. “I had reminders from people back home. [They said], hey be yourself, don’t stress yourself out, [and] don’t create the world all over again,” Beasley said. “The situation is what it is, but I can’t become the situation. I have to be me.” Even former players like Willie Calhoun and Scott Heineman posted congratulations online to Beasley for the opportunity he’s getting, even recalling Joey Gallo last season when he chose Beasley as his throwing partner in the Home Run Derby at Colorado.

So what makes Tony Beasley an excellent managerial candidate? First, he’ll bring passion and fire. I’m not saying there wasn’t any before, but I know it won’t lack with Beasley managing. “It’s a tough spot for him to be in,” Brad Miller said to me. “I know he was close with Woody being on the same staff with him. But yea, [Beasley] wants to come in, be himself, and finish strong. That’s the reality of it all the time. Unfortunately, you get a little wake-up call when somebody like Woody loses his job and [him] not being here.”

Second, there will be more leadership. I don’t mean leadership from the manager position. Beasley is urging more leadership from the tenure players like Marcus Semien and Corey Seager. Remember, it’s Semien and Seager’s first year with the Rangers and two guys who are somewhat quiet individuals; it can take time to trust and integrate yourself into a group of people (I’m like that too).

With Chris Woodward out, Tony Beasley becomes the acting manager of the Texas Rangers.

I don’t know if managing is something Tony Beasley wants to pursue and would accept if the Rangers offered him the job. It’s an audition, but it’s a small forty-eight-game sample size where the players needed to overcome two significant firings. Also, it wouldn’t surprise me if Chris Young has someone in mind to hire once the season concludes, and depending on whom it is, they have to wait until the World Series ends. One thing is for sure, whatever decision Tony or Chris Young make, the Rangers need Tony Beasley on their staff in 2023. “I love Beas, and I welcome him being a Texas Ranger at any capacity. We’d be lucky to have [Beasley],” Young said Thursday.

“It’s a good shot for [Tony Beasley]. Show that first of all that he can do it, and hopefully, he’ll do great,” Martín Pérez said to me. “I think he’s going to enjoy the time [in] this month and a half, and I know he’ll learn a lot. But it’s good for him because he’s been around for a long time and [Beasley] knows how to handle the team. He communicates good and is a good friend of ours. [Tony] is going to do a good job.” Will the Rangers make a playoff push? No, but I think the goal right now is to integrate hard work with fun and institute a winning culture. There’s no better person to mix all those than Tony Beasley. The Rangers are 5-3 since Beasley took over and won three straight for the first time since June 11th-13th.