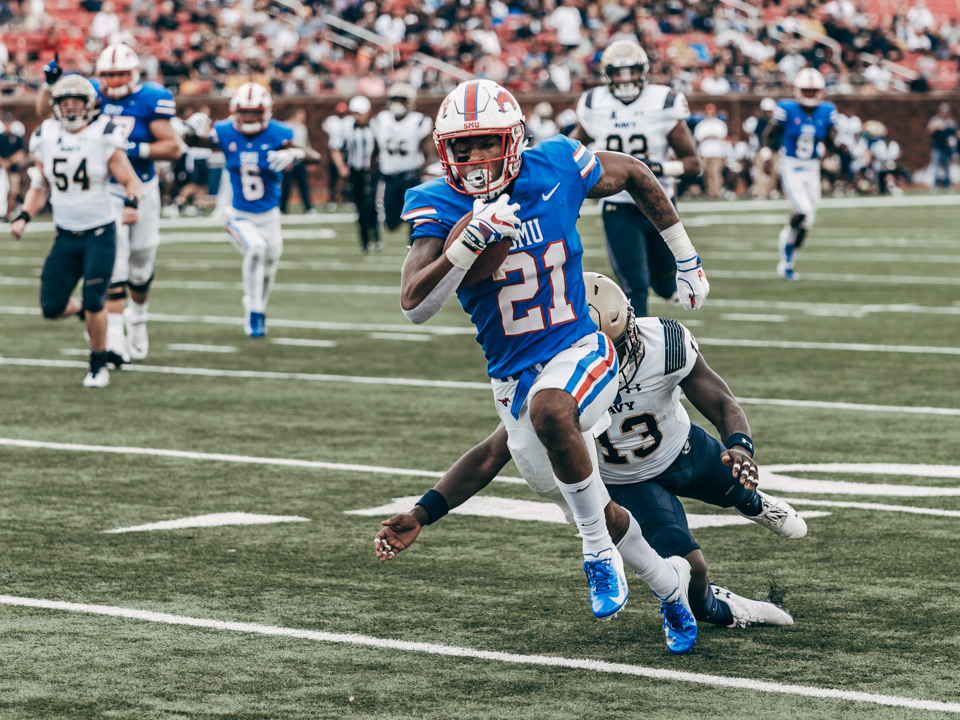 The SMU Mustangs and Navy Midshipmen squared off for the 20th time on Saturday. Navy won in 2017 43-40 and had won the last eight meetings and 11 of the last 12 before Saturdays OT loss.

The Mustangs came into this game 0-3, but they were the only team in the country that has played two then-AP top 20 teams.

True freshman William Brown started at quarterback for the Mustangs. Brown came in last week against Michigan and completed 11 of 17 for 82 yards and two touchdowns. He ended up leaving the game after a big hit that knocked his helmet off.

After a quick moving first quarter, SMU trailed 7-3. The mustangs started the game with a 14 play drive that resulted in a field goal. Navy responded with their own 18 play, 78 yard drive that ended with a touchdown by Zach Abey.

The Mustangs would take a 10-7 lead in the second quarter on 20 yard pass from Brown to Reggie Roberson Jr. That drive was set up by a Midshipmen fumble.

Navy would get the scoring started in the second half with 25 yard touchdown pass from Garret Lewis to Mcyhal Cooper with 7:20 left in the 3rd quarter. Roberson Jr. would return the ensuing kickoff 98 yards for a touchdown to make the score 17-14 SMU. That kickoff return touchdown was the first for the school since November 2015 when Braeden West returned one for an 80 yard touchdown against Temple.

Another Navy fumble would set up the Mustangs at the Navy two yard line early in the 4th. Brown would miss West in the end zone on third down but would come back and complete a pass to Myron Gaillard for the touchdown on 4th down. That score put SMU up 23-14 with the PAT pending. Navy would block and return the PAT to keep it a one possession game, 23-16 with 12:25 left the in the 4th.

With 6:19 left in the 4th quarter, Navy would tie the game at 30-30 on a CJ Williams 52 yard touchdown rush. That would remain the score into overtime.

In overtime, SMU won the toss and elected to play defense. Navy would score and convert the PAT on the first possession. Ben Hicks came into the game in overtime and completed all three of his passes for 16 yards and the two point conversion to Hunter Thedford that won the game in OT.

On the quarterback situation going forward, “We will look at the tape and see…good thing is we have confidence in two quarterbacks. I don’t see how that is a bad thing,” Dykes said.

Next up for the Mustangs is a home contest against Houston Baptist next Saturday.