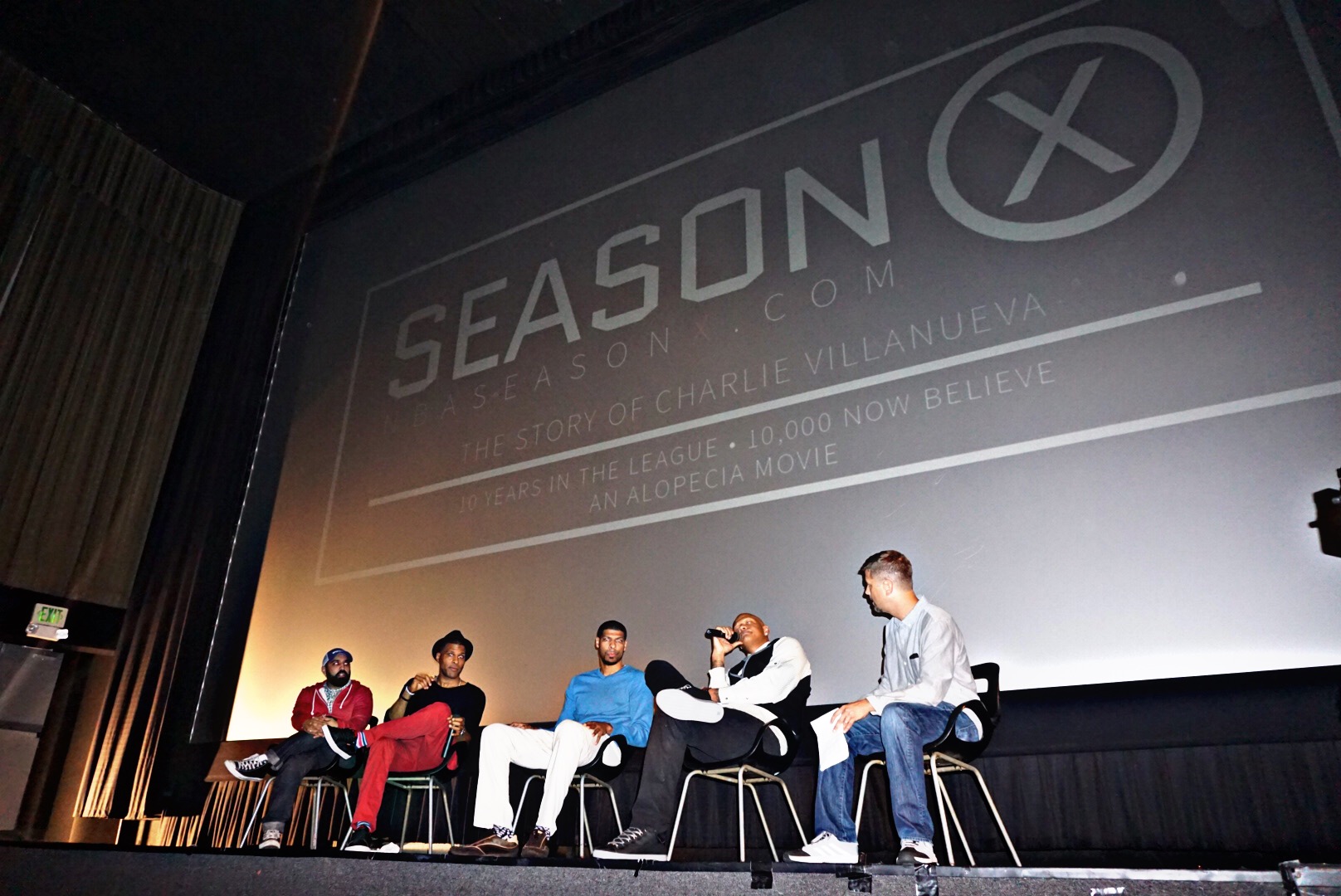 Last night at Landmark Theaters in Dallas, Charlie Villanueva held a private sneak peek of Season X: The Charlie Villanueva Story for Dallas Mavericks season ticket holders and media. The event was a huge success and the film left all who attended feeling challenged and inspired.

Season X (ten years in the NBA) is a unique biopic that tells the story of Charlie Villanueva and the challenges of being the first and only NBA player to play the game with alopecia autoimmune disease. The film is made even more special by the fact that it was produced by “Team Villanueva,” which is made up of Charlie’s brothers Rob E. Villanueva and Rob C. Villanueva and manager Burton Chawla.

Alopecia, as defined by the National Alopecia Areata Foundation (NAAF), is a disease that affects the hair follicles, which are part of the skin from which hairs grow. As a result, hair is lost from the scalp and elsewhere on the body. Villanueva, who was first diagnosed with the disease at the age of 10, had lost all his hair by the age of 12 and faced difficult times due to his appearance.

“You could imagine how rough things were as a kid. Not being socially accepted,” Villanueva said on his her personal website. “Why this is significant, and trust me I don’t talk about this much, is because it was really tough on me as a kid. People made fun of me… kids can be mean and nasty. I had no one to look up to and guide me. So I took to basketball.”

As Villanueva puts, it basketball was his therapy, and something he worked hard and excelled at. After playing college ball at the University of Connecticut, he was drafted as the 7th overall pick by the Toronto Raptors in 2005, making the NBA All-Rookie Team in his first season as a pro. He was then later traded to the Milwaukee Bucks, where in 2006 he had the best statistical season of his career, averaging 16.2 points and 6.7 rebounds, helping him land him a five-year, $40 million contract with the Detroit Pistons.

However, by the 2014 season and in the last year of his contract, Villanueva found his career coming to a crossroads after losing his spot in the Pistons’ regular rotation, ending a disappointing and turbulent stint with Detroit.

By the time the 2014 offseason rolled around, he was looking for a change; somewhere he felt wanted and accepted. After talking with other teams, including the Los Angeles Clippers, he eventually decided to sign a non-guaranteed contract with the Mavs. Villanueva talked about the role Rick Carlisle had in his decision to come to Dallas during a Q&A session, hosted by Jeff “Skin” Wade of 105.3 the Fan, following the sneak peek.

“He (Carlisle) told me there was an opportunity here, but you have to be willing to work,” Villanueva said. “I just want to say thank you for making it happen. I’m very appreciative of that. “

In his time with the Mavs, Villanueva can best be described as humbly confident. He has had a certain sense of joyfulness that radiates with everything he does and his perseverance and commitment are unmatched. In the locker room, before the game and during the Mavs shoot around, his positive attitude and presence provides the type of leadership-by-example that the Mavs greatly need. It’s clear that Villanueva’s challenges with Alopecia have helped shaped him into the man he is today.

“Team Villanueva” has started a Kickstarter crowd funding campaign. The hope is that Season X provides those with, and without, Alopecia a way to get involved in the fight. It’s these types of stories that go on behind-the-scenes that you don’t hear enough about in the NBA, and Villanueva’s story is a truly powerful one. You can help contribute to the cause by visiting NBASeasonX.com.

“What we’re trying to do is raise money to finish the film,” said Burton Chawla, who introduced himself to Carlisle as Charlie’s guy. “We use Kickstarter to create awareness. We use it as a PR tool, as a marketing tool. We want to create a movement more than anything else. A message can be carried by an individual, if a group gets together on that same message, it can be really strong.”

“The end goal is to create a movement, create awareness, and to educate people,” Villanueva said. “Bullying now and days is at an all-time high, especially with social media. So, I just want to create a movement and also leave a legacy behind (off the court).”

For Charlie, this is where that legacy begins.

You can watch the trailer for Season X (10 years in the League, 10,000 now believe) at NBASeasonX.com. The final production of the movie is scheduled to premiere in Toronto during NBA All-Star weekend on February 12.