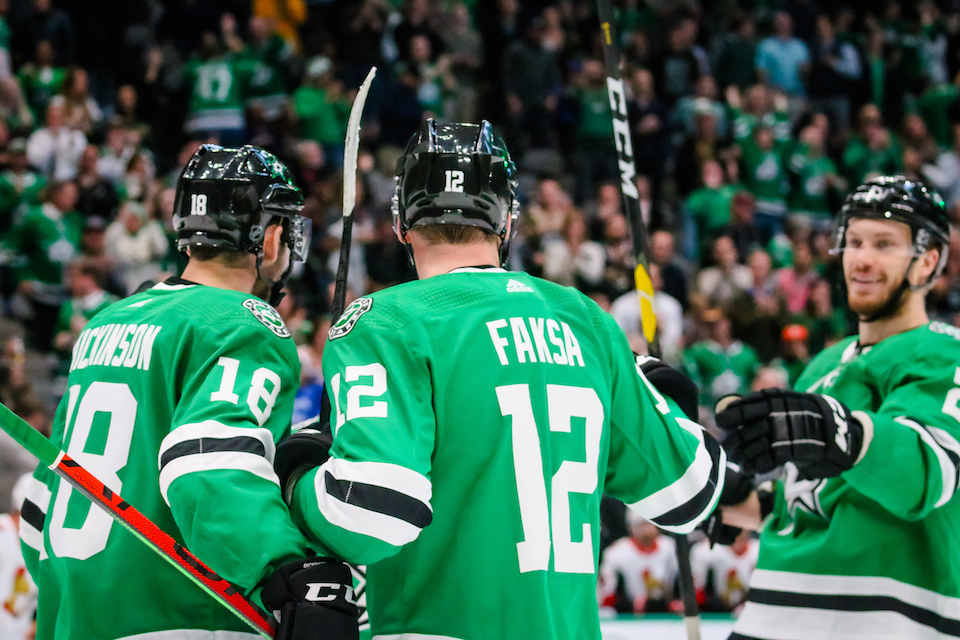 Stars appear to have stopped the bleeding, after a win against Ottawa

Stars appear to have stopped the bleeding, after a win against Ottawa

The Ottawa Senators came to Dallas, fresh off of a 5-2 loss, and faced off against a Stars team looking to win their second in a row.  The Sens started back up netminder Anders Nilsson, in place of Craig Anderson.

Dallas, led by young Roope Hintz, won their last game in Philly, and has looked better since off-season acquisition Corey Perry’s return from injury.  Perry has played three games and mustered up a goal and two assists, tying him for 7th on the team in points.  Anton Khudobin started goal for the Stars, looking for his first win of the season.

Radulov had a couple really good chances on his first shift of the game, but Nilsson was able to stop a couple offensive assaults by the Stars early.  Joe Pavelski was able to draw a tripping penalty with a little over 13 minutes left in the first, but it would not yield the first goal of the game.

After out shooting the Sens 16-9, Radek Faksa was able to tip in a shot from the from Taylor Fedun, for his second goal of the year.  The goal came at the end of the period, giving the Stars the momentum going into the intermission, after controlling the majority of the period.

The second started off slow for the Stars, as Ottawa got a few shots on goal.  However, Namestnikov took a delay of game penalty, which was quickly followed up by an interference penalty by Jean-Gabriel Pageau.  The Stars had 1:28 on the 5 on 3, in which Joe Pavelski was able to bang home his second goal of the year, just after the first penalty ended.

The Stars would get another power play opportunity with a few minutes left in the game that resulted in two posts.  With a 1:27 left in the second, Cogliano picked up a holding call, which would roll over into the third period.

The third period started off with another sleuth of shots.  Brady Tkachuk took a bad penalty out of frustration against Esa Lindell after an offside call.  The Stars would not be able to convert, but they did manage to hit their third post on the power play of the game.

Namestnikov spoiled Khudobin’s chance of a shutout, with 1:13 remaining on the clock, assisted by Connor Brown and Thomas Chabot.

The Stars had a strong game and addressed a few of their concerns.  They got a first period lead, scored on the power play, and got more shots than the opposing team.  Granted, against the Senators, it isn’t a whole lot to be ecstatic over, but they are steps in the right direction.

Mattias Janmark is another player who seems to be having somewhat of a bounce back year.  His speed and passing has helped him tie for team lead in assists this year, after a couple pretty complacent years back to back.

Let’s hope that the Stars’ wheels are greased up and ready to keep rolling for another few wins.  Do that, and they will be right back in the mix, in the toughest division in the NHL.