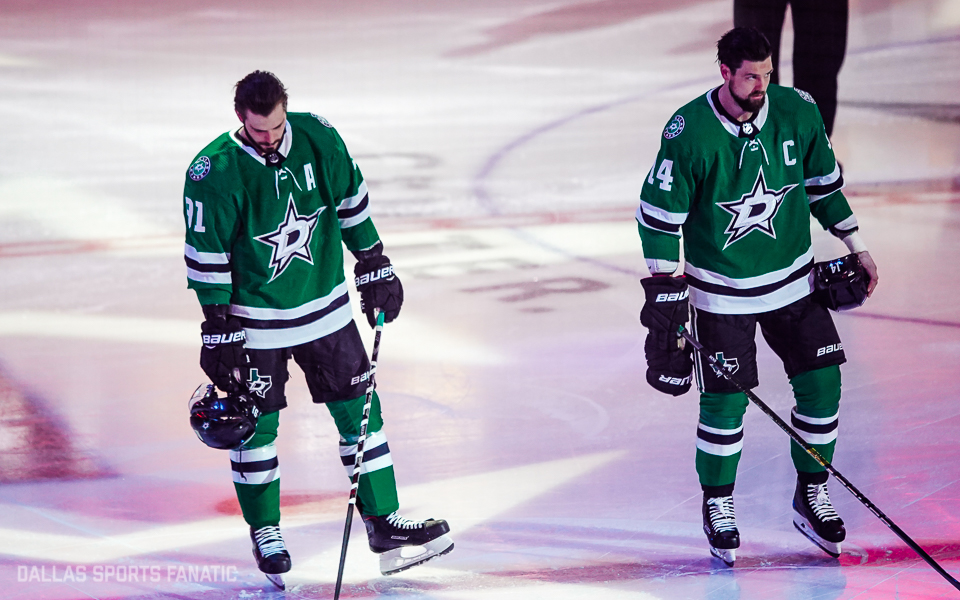 Stars doused by Blues, lose tight match up in Game 3

Stars doused by Blues, lose tight match up in Game 3

Dallas and St. Louis split the first two games in River City.  Goaltending, strong defense, and secondary scoring helped the Stars power through the Predators in the first round, and they have continued playing a similar brand of hockey into the next.

The Blues’ Head coach Craig Berube switched up their lines a bit, by putting their leading goal scorer, Jaden Schwartz, on the first line.  Schwartz came into the game with five goals, after he only scored 11 goals throughout the course of the regular season.

Just over two minutes into the first period, usual suspect Jaden Schwartz opened up the scoring against Ben Bishop.

Dallas defensemen created multiple opportunities, but it would be Alexander Radulov to net the first goal for the Stars, after a beautiful saucer pass by veteran Jason Spezza.  The period ended 1-1.

The Blues would be the first team to score in the period again, as Tyler Bozak slapped in a loose puck, that escaped Ben Bishop.

Radulov would get a chance at his second goal of the game, after being given a breakaway pass from Roman Polak.  He tried to use his backhand to lift the puck, but it started rolling just as he made his move and another huge save was made by Binnington.

Shortly thereafter, Ben Bishop would send a stretch pass to Cogliano, creating another breakaway.  Blues players raced off the bench after him, lifting his stick, preventing a shot from ever even getting on net.

Once more, the Stars were given a power play opportunity, which was again, unsuccessful.  When the Blues’ penalty was over, Carl Gunnerson snuck up behind Heiskanen to steal the puck, creating a breakaway for St. Louis this time.  Janmark was able to hustle back and break up the play, as the period concluded 2-1.

The Blues came out with purpose to start the third, applying pressure early on.  Play continued to get chippier and chippier.  It seemed as if the refs wouldn’t call anything.  Dallas fans responded by throwing beer on the ice after a high sticking call against Roman Polak.

About a minute into the penalty kill, a St. Louis player mishandled the puck, creating a 2 on 1 opportunity for the Stars.  Janmark carried the puck down low and slid it over to Cogliano, who was able to redeem himself from his missed breakaway earlier in the game, tying the game at two each.

During that same power play, Blues captain Alex Pietrangelo hit the post.  On the next play, he got another chance and capitalized.  St. Louis once again had the goal advantage, making the score 3-2, with about five and a half minutes to play in the third.

Heiskanen would hold the blue line after an errant pass by Pietrangelo and make an incredible pass over to Tyler Seguin, who would one time the puck into the net, evening the score at three apiece.  The building erupted and momentum seemed to be in favor of the Stars.

After some battling in front of the net, Patrick Maroon pushed Lindell from behind, creating separation, which he then used to get wide open in front of the net.  The St. Louis native roofed the puck over Bishop’s shoulder, giving his team the go-ahead goal to make it 4-3 Blues.

Dallas would get a late power play after a delay of game call against Colton Parayko.  With the goalie pulled, the Stars applied pressure, but it would be too little, too late, with the game ending in favor of the Blues.

The Dallas Stars went 0/4 on the power play and will have to capitalize on the opportunities that they are given if they are going to bail Ben Bishop out of some games in these playoffs.

The St. Louis Blues have stayed perfect on the road in the playoffs throughout the series.  Greg Berube tinkered with his lines and it worked, as his team stole the first game in Dallas.

The Stars will play one more game at home, before heading back to St. Louis for game five.