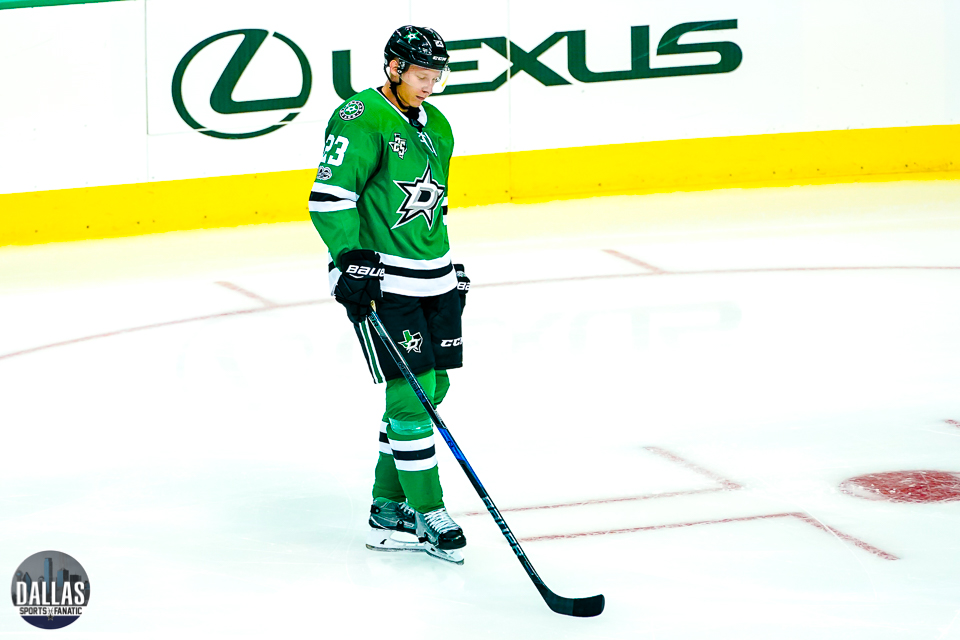 For the Dallas Stars, that meant not producing tangible offense in a loss to the Colorado Avalanche.  The series is now tied 2-1 heading into game four.

In the first, Tyler Seguin would open up the scoring.  After battling to gain position in front of the net, Seguin would eventually put home a pass from Jamie Benn.

The remainder of the first period would a relatively close back and forth but ultimately the edge was given to Colorado.  The Avalanche led all offensive categories heading into the first intermission.  This trend would continue.

It didn’t take Colorado long to make up the one goal difference, scoring just one minute into the second period off a laser shot from Zadorov.  Off the face off, Zadorov put his weight into a slap shot from the point that left Dobby going the other direction.  This would not be the end of the offensive onslaught that was the second period.

After failing to get the puck out of the offensive zone, the Stars would give up another goal to the offensive powerhouse that is the Colorado Avalanche.  Off the turnover, Burakovsky would find his way to the high slot and send a delicious wrist shot past Dobby and into the top corner.  The Avalanche would take the lead in convincing fashion and continue to put their foot on the gas.  It’s almost like they’ve been the hottest offensive team in the playoffs thus far.

While a bit fluky, the third goal was still a product of relentless offense and things just going a certain way.  Gabriel Landeskog would eventually out muscle Miro and put in the favorable rebound that would pad the Avalanche lead.  The period would end soon after and the Stars found themselves in a hole to climb out of.

The third period was a different story.  The Stars would go on the power play early which would lead to a number of scoring chances.  Just six seconds after that expired, Denis Gurianov would score his seventh goal in Ovechkin like fashion, dropping to one knee and rocketing one to the back of the net.  The Stars were now within one.

Five minutes later, Blake Comeau scored his second goal of the playoffs on another one knee ripper that would light the lamp.  Suddenly, we had a brand new hockey game.

And just like that, the Comeback Kid’s of the 2020 playoffs would strike again.  After a pure facebook win from Jamie Benn, Esa Lindell would send a quick wrister right back off the Star’s captain and into the back of the net.  The Stars would take their first lead since the first period.

This lead last all of one minute.  Mikko Rantenen, off of a sick feed from Nathan Mackinnon, sent a blistering snap shot past Dobby for the tying goal.  A back and forth has commenced.

Less than a minute after that, the Stars would give up another goal.  Nazem Kadri redirected a shot from the point that got past Dobby and put the Avalanche back on top.  Just after midnight central time, this game was officially drunk.

The Avalanche would finish the job with an empty net goal with around a minute left.  During this transition, Heiskanen took an awkward check to the knee forcing him to skate gingerly towards the bench.  He missed no time and took his very next shift.  The Stars dreams of 3-0 would come to an end and a very intense game four is set for Friday evening.

A silver lining can be taken from the play of Jamie Benn.  With a goal, an assist and a vintage physical performance, the Stars captain appears to be in top form heading into the four game of the second round.

Outside of the loss, the game had a somber feeling around it as the sports world found themselves looking at more important societal issues.  The NBA, led by the Milwaukee Bucks, would boycott the day’s playoff games in response to the killing of a black man, Jacob Blake, at the hands of police.  It would further highlight the demands for social justice and police reform that has gripped the nation.  The WNBA, MLB and MLS would also cancel games in response.  The NHL played all the days game without interruption.