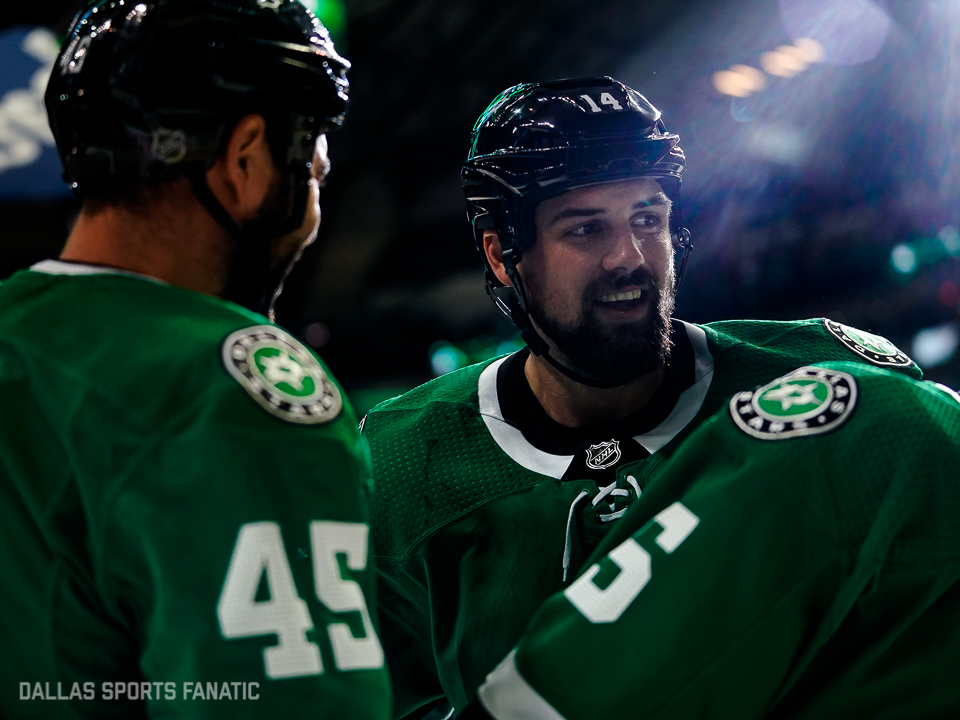 Stars flip the script against Jets

Stars flip the script against Jets

Overview:
Prior to this game, the Stars have been 1-9-0 in the past ten contests against the Winnipeg Jets. Stars fans came into this game, expecting Winnipeg to look like a Stanley Cup contending team. However, it was Dallas that looked playoff ready. The Stars were relentless, the powerplay phenomenal, and the penalty kills perfectly. This team made a statement win against the Jets and although the top players got the points, every Star made an impact.

First Period
What looked like a 1-0 lead for the Jets was immediately waived off as goaltender interference. Alexander Radulov went down the ice shortly after and banked one off of Winnipeg’s Tyler Myers for the Stars first of the game. Blake Wheeler eventually took an interference penalty and the Stars power play went to work. Tyler Seguin snuck one through Hellebuyck for his first of the year. Towards the end of the period, the Jets were originally granted a powerplay due to Methot’s hold on Byfuglien. However, Byfuglien’s lack of composure led to an intentional cross-check to the face of the Star’s Connor Carrick who was entangled with Winnipeg’s Adam Lowry.

Second Period
The Jets were able to crack the scoreboard due to a beautifully placed shot by Kyle Connor that went upstairs on Ben Bishop. The Stars weren’t phased by the goal and went back to implementing Montgomery’s plan. A few minutes after the Jet’s goal Byfuglien was called for a hold and the Stars powerplay got another chance to increase the lead. Jamie Benn was able to sneak one past Hellebuyck, on the doorstep, and gave the Stars a 3-1 lead. That goal was Jamie Benn’s 600th career point. Marc Methot took an interference penalty about midway through the period but the Stars penalty kill completely shut down the Jets.

Third Period
The Jets came flying out in the third, with 15 shots, but Bishop stood tall. The Stars only mustered up five shots on goal, but the quality of those shots led to two more goals. The Jets’ Tyler Myers took a high-sticking penalty and just mere seconds into the powerplay Benn took a backdoor pass from Seguin and made it 4-1. Five minutes later, Radulov stole the puck from the Jets and threw it out to Seguin, where he took that pass and made it 5-1 Dallas with a nifty backhand. The Stars then held down the fort around Bishop and finally broke an 8-game winless streak against the Jets.

Recap
The Stars look relentless, ferocious and hungry. All four lines are checking and the defense is just in perfect position. Blake Comeau has been an excellent acquisition so far and his back-checking is something that Stars have desperately needed. Miro Heiskanen already looks like a 26-year old veteran and his ability to create offense has been beneficial to the Stars two wins so far. Connor Carrick has 3 assists in 2 games and that trade is beginning to look like a steal for Jim Nill. Overall this team looks like they are buying into Jim Montgomery’s style and hopefully they can continue this swing upwards.

What’s Next
The Stars continue their four-game homestand with the Toronto Maple Leafs coming in on Tuesday.