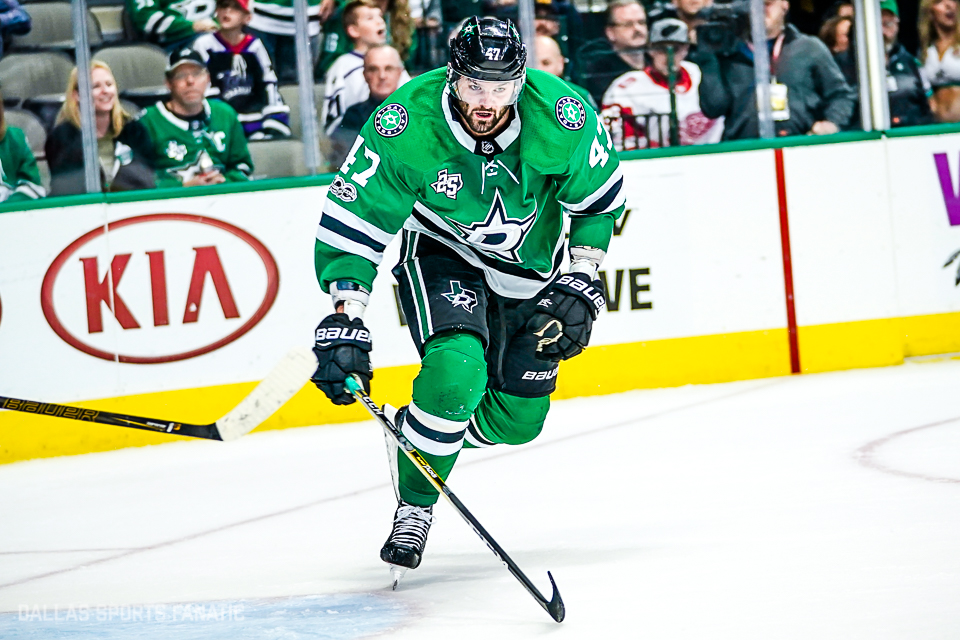 To win in the Stanley Cup Playoffs, it takes goal scoring, penalty killing, elite goaltending, and a little bit of puck luck.

Dallas got all of that and more in a dominant second period on the way to a 5-2 win over the Colorado Avalanche in its second round playoff matchup in the Stanley Cup Playoffs at Rogers Place in Edmonton.

The Stars came out flat after a strong game one, and the Avalanche flipped the script immediately. Colorado outshot Dallas 18-6, and drew first blood with a power play goal from Hart Trophy Finalist Nathan MacKinnon.

Momentum shifted significantly midway through the second period- and never tilted back in the Avalanche’s direction.

After Colorado drew a slashing penalty on Joe Pavelski- one of Dallas’ most effective penalty killers, MacKinnon set up running mate Mikko Rantanen for another power play goal.

Less than a minute later, Dallas drew a corresponding slash, and when paired with another Colorado error, Dallas was set with a 5-on-3. It took just 11 seconds for the Stars to capitalize, and Pavelski made up for his earlier mistake with a goal on a wrist shot, his seventh of the postseason.

Dallas still had over a minute-and-a-half with the man advantage, and converted almost immediately. The Avalanche failed to regroup after Pavelski’s goal, and Radek Faksa took advantage, scoring his second goal of the playoffs on a net-front scrum to tie the game.

After going just 6-30 with the man advantage in the first round, Dallas converted both its second period chances, and did in just 43 seconds.

The momentum didn’t last long, however- Dallas found itself in a position needing to kill off a 5-on-3 after another slash and costly Blake Comeau delay-of-game minor.

Paired with the luck of a MacKinnon wrister striking the post, the Stars sunk their heels in defensively and recorded a rare penalty kill with a two-man disadvantage.

Dallas had puck luck later when Alexander Raudlov scored a goal deflected off an Avalanche defenseman. It made three goals in just 5:40 for a team that struggled to score more than three per game in the regular season.

Esa Lindell wasn’t satisfied with the one-goal cushion, and scored his first goal of the postseason fueled by pure hustle after a Rantanen giveaway to make it 4-2 in the final minute of the second.

The Stars dominated the third period physically and added an empty net goal on the way to sealing a 2-0 series lead.

Dallas was extremely physical as well, logging a whopping 60 hits paired with 19 blocked shots. They’ve been the more physical team on the ice and in the score sheet, pacing Colorado in both of those statistics in the first two contests.

In net, Khoudobin was strong again in net in place of injured starter Ben Bishop, who hasn’t played since game two of the first round. No matter his status, Khoudobin’s play might be settling Dallas’ goalie debate. He stopped 38 of Colorado’s 40 attempts.

Dallas has shown a night-and-day improvement to many of the issues that plagued it early in the bubble. After giving up shorthanded goals in three straight contests vs. Calgary, the Stars have kept Colorado’s potent offense and power play relatively in check, holding it to just five scores. For comparison, the Avalanche scored 14 in their final two games vs. Arizona in the first round.

In addition, Dallas has scored a whopping 10 goals in just two games. Late in the regular season in in the qualifying games, it was a struggle for Dallas to push across more than three. Interim coach Rick Bowness has found something that works for the Stars’ offense, and it’s clicking at the perfect time.

Dallas will have a chance to take a suffocating 3-0 lead on Wednesday night at 9:30 (NBC Sports).