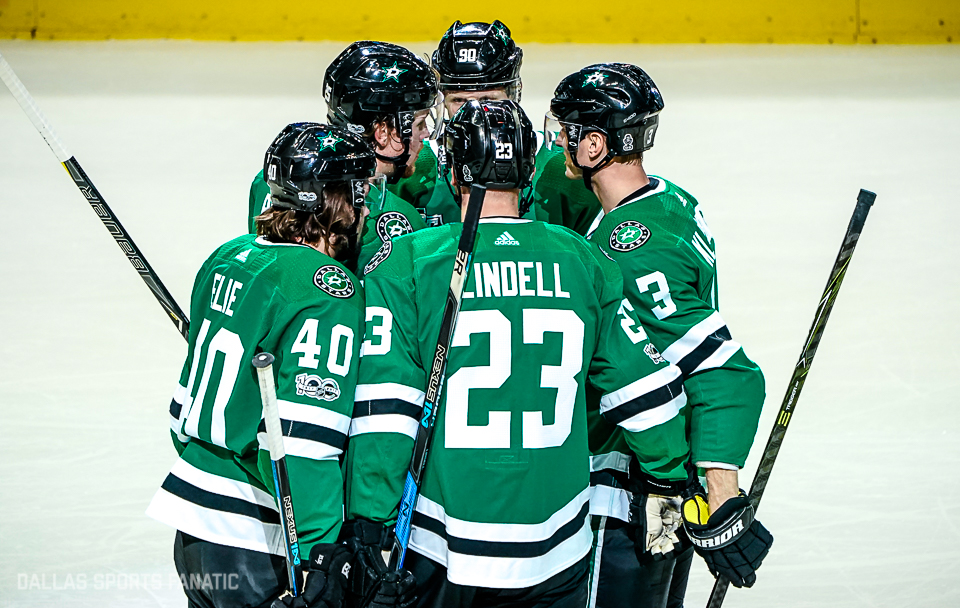 The Dallas Stars took a crucial one game lead over the Calgary Flames with a gritty 2-1 victory in Game 5 on Tuesday.

Anton Khudobin got the start for the second straight game.  Ben Bishop and Stephen Johns were still unfit to play.  Matthew Tkachuk would miss another game for the Flames.

The Stars opened the scoring with a violent shorthanded goal courtesy of Jamie Benn.  Love shorthanded goals when they come off our sticks!  It was a delicious backed handed feed from his buddy, Tyler Seguin, that sent Jamie benn literally through the net. As Razor said in the broadcast, if you’re hungry for goals, head to the water bottle. Jamie took that advice literally.

That's one way to get on the board 😂#GoStars pic.twitter.com/d8iFqQ3kIG

The Stars scoring first in back-to-back games.  Is this real life?

There were just :45 seconds remaining in the period.  Bummer.

The Stars top two forwards, Benn and Seguin, tallied 4 shots between the two of them and appeared to be playing with a renewed sense of urgency as they both try to break out of cold streaks in the points department.  The defensive workhorse, Miro Heiskanen, led the team with 8:32 seconds of ice time in the first.  Not surprising.

The Stars appeared to be allergic to escaping the defensive zone as turnovers was the theme of the first 10 minutes of the second period.  Naturally, this lead to some minor pushing and shoving that during what appeared to be a minute of “no-rules” immunity as anything seemed to go.  Playoff hockey was the vibe.

The one they called Johnny Hockey stood out as well during an onslaught of quick handed offense led to balance returning to the game.  The tide had shifted – Calgary was in charge now.  Perhaps some digital applause from 1600 miles away will do the trick?

The Flames continued to press the Stars back on their heels but were unable to capitalize on the momentum shift.  Eventually, thanks to an aggressive forechecking strategy, the Stars were able to create some real high percentage scoring opportunities. Benn, Seguin and Perry all had open looks at Talbot but he would not concede.

The physicality continued to escalate.  The referees seemed to bury their whistles after a 1st period that saw four total penalties.  There would be nothing but player policing in the second.

It was an old school period.  One filled with players successfully sacrificing themselves to block a puck and bodies clashing against each other like waves meeting the shore.  The pace began one-sided but eventually turned into one of those games with limited whistles, battles at every puck and tons of fan anxiety.

In a period that the Flames owned in the beginning, the Stars took over by the end  The shots would sit at 27-14 in favorite of the Dallas Stars but the goal line would remain even as we entered the second intermission.

It didn’t take long for the Stars to take a 2-1 lead over the Flames to start the third period.  John Klingberg, who is a man always seeking the back of the net, fired an ambitious wrist shot from the point that beat Talbot in the top corner.  It’s a goal that’s the product of Klinger’s aggressive style of playing the point.  This is also first goal of the postseason after his potential overtime winner ended up going off Alexander Radulov’s stick in game 5.  Mattias Janmark would get the assist.

Nothing snags bucket loads of positive momentum like an early third period goal in a tied game.

In tight games, nothing matters more than brick wall goaltending and that’s exactly what Khudobin delivered.  “Dobby” made a series of clutch saves including one that send his stick flying towards the Geico ad.  In the absence of Bishop, Khudobin has answered the call.

In the playoffs, when the game is as thinner than the ice they skate on, those last five minutes of play can feel like an eternity.  The Flames needed a goal so the offensive pressure went from aggressive to extra aggressive.  The Stars withheld the initial Flames occupation of their offensive zone effectively, and were able turn a counter attack into a delay penalty call.  Jamie Benn took the goal wide, sending Giordano sliding into the net like he was trying to steal second place.  That’s not allowed!

While they didn’t score, they wasted two entire minutes passing the puck around in the Flames zone.  I’d call that a success.

The following few minutes would be the same as the previous fifty-seven.  Mucky.  Dirty.  A complete grind.  The Flames would exit a timeout with Talbot on the bench.  The most anxious part of the game commenced.

The Flames’ 6-man unit worked effectively as they peppered Dobby with shots from all angles, the puck staying inside the Stars defensive zone for an uncomfortable amount of time.  Cogliano would take a rare penalty with twenty seconds left to increase Stars fan’s nerve levels.  This proved to be an avoidable issue as the Stars managed to kill off those last few seconds and jump ahead to a 3-2 series lead.

This game was a vintage Dallas Stars victory.  It was won in the trenches along the boards, grinding for every puck and relying on steady goaltending to get the job done.  It’s the type of win that keeps the training staff busy tending to cuts and bruises and one that the Dallas Stars are very comfortable with.  I don’t think anyone has won more games while scoring just two goals.

Game five’s are among the most important games in a playoff series.  In fact, the winner of game five goes on the win the series more than 78% of the time.  Star’s fans will take that.

Game six is scheduled for Thursday, August 20th on NBCSN and Fox Sports Southwest – puck drop time is TBD.  Also, be sure to keep an eye out for the Dallas Stars Fanatic podcast.