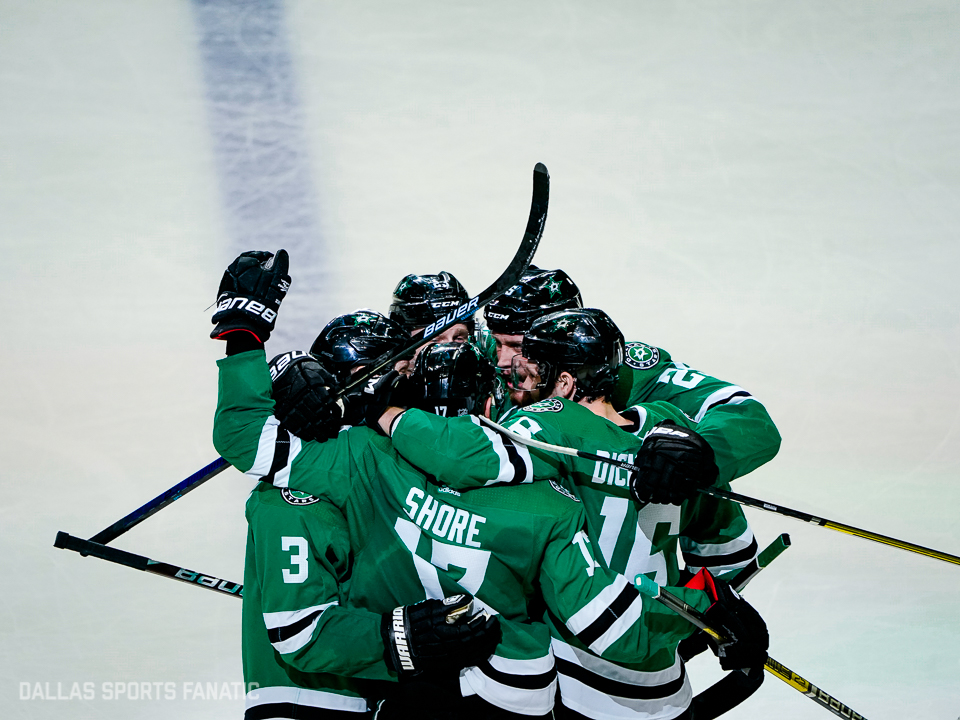 Overview:
The Stars could not afford to lose this game. The central division is the best in the league and every game matters. The Kings have had their own problems, as well, and many similar to Dallas. They have depth issues, but what’s astonishing is their defense. LA is usually one of the best defensive teams and so far, this year, they are one of the worst. Both teams were on a losing streak and it seems that Dallas was more interested in ending their skid.

First Period:
The Stars dictated most of the first period and applied heavy pressure to the Kings. The most noticeable player within the first period, for Dallas, was Jason Dickinson. His forecheck was impressive and he even assisted on the only tally within the period. Dickinson took a nice pass from Spezza and attempted to wrap around the net, where he then fed it out in front. Stars forward Blake Comeau then blasted it over the right arm of LA netminder Jonathan Quick. The Kings then tried to take control of the game, even getting a power play, but Dallas held their ground.

Second Period:
The second period was the exact opposite of the first. It was fast and exciting to watch. The LA Kings flipped the script on the Stars and dominated the first half of the period. It seemed as if the period would be a repeat of the first, but then both teams changed the narrative. The Stars Justin Dowling raced into the Kings zone and his shot took a gigantic rebound off of Quick. Spezza then snapped a wrister over Quick’s shoulder to increase the Stars lead. Not too long after that, the Kings caught Dallas in a change and made them pay. Anze Kopitar scored on a breakaway after a perfect pass from Drew Doughty. Then, 22 seconds later, the Stars answered the Kings immediately. John Klingberg’s shot went off of LA’s Jeff Carter and made it past Quick to replenish their two-goal lead. Shortly before the end of the period, LA took advantage of another bad Stars line change and Tyler Toffoli scored on another breakaway chance.

Third Period:
Dallas played a shutdown, defensive final period in an attempt to keep the Kings in check. Although the Kings tested Bishop, nothing could penetrate the big netminder. Bishop even robbed Thompson off of a beautiful backhand that should have gone in. Dallas, however, would be given a powerplay where they eventually doubled their lead. Tyler Pitlick scored the goal, which was his first of the year and his first ever career powerplay goal. The Stars were then content with milking their two-goal lead and readied for the potential onslaught from the Kings. With around two minutes left, LA pulled their goaltender and hoped for two lucky goals. After what appeared to be a goal for the Kings was quickly overturned and Dallas held on for the win.

Recap:
The Stars’ depth scoring was a big reason Dallas beat the Kings, but Bishop was instrumental to the win. There were a couple of moments where Bishop kept this game close for Dallas. Then the Stars were finally able to activate their depth and help out their goaltender. Jason Spezza has been the Stars best forward over the past five games. It seems as if Spezza is finally returning to his second line center form. This could prove to be beneficial because if Spezza adapts to that role, then Dallas may not need to trade for an overpriced forward. Justing Dowling played a great first game back in the NHL and hopefully, he can continue that success. DevinShore played a great defensive game and Pitlick was just everywhere on the ice. The biggest disappointment this year though, has been Mattias Janmark. He plays solid defense but has not registered a point. If Janmark can find his groove and Spezza can keep up his production, then maybe our depth problem can solve itself.

What’s Next:
The Stars stay in Dallas as the Ducks fly into town.