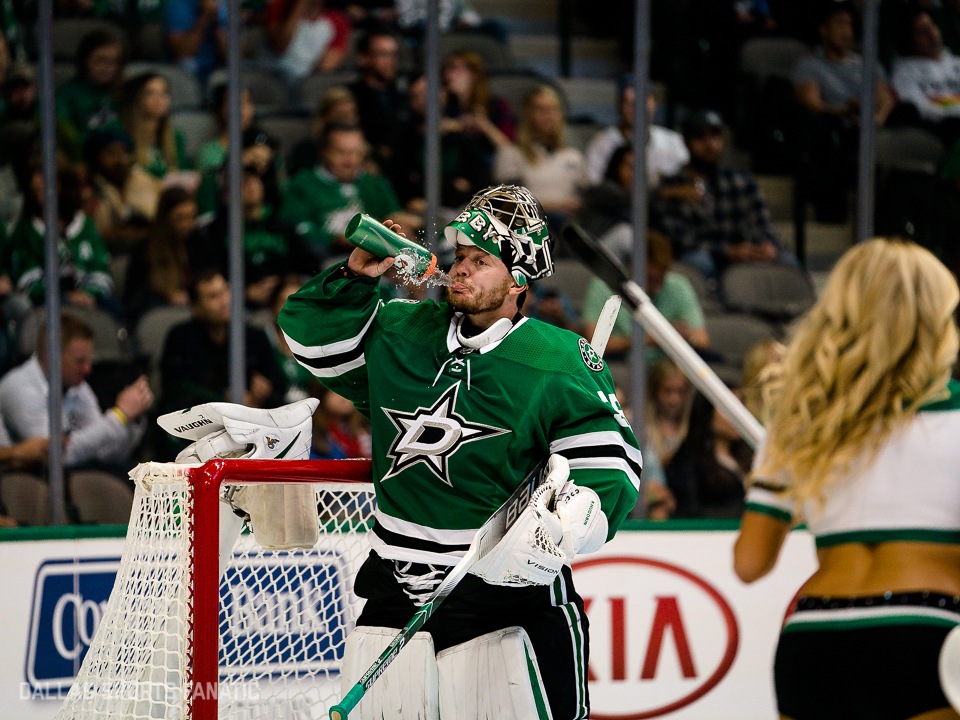 Overview:
What a spectacular performance by Anton Khudobin. The Stars have continuously had solid goaltending this year. Once again, Khudobin deserves all the credit for this game and kept the Stars lead quite comfortably. This wasn’t the Stars best game this year, but it seems that Monty calling out the players during morning skates was somehow beneficial.

First Period:
The Stars began a little different than they usually do. Instead of being badly outscored, the Stars put up 13 shots to the Predators 12. It may not have been a dominating opening frame, but it’s certainly better than how they normally begin a game. Also, the Stars were able to take advantage of their better players and scored off the rush. Tyler Pitlick took a return pass from Faksa and wired a wrister from the slot, beating Pekka Rinne low glove side. It was a good thing that the Stars scored first because it did two very important things. One, it gave the Stars confidence that they can take compete with the Predators. Two, Nashville has an excellent record when scoring first, therefore giving Dallas an advantage.

Second Period:
Once the second period began, the Predators tried relentlessly to break Khudobin. They peppered the Stars with a total of 19 shots to the Stars measly six. However, it was not the Stars that broke, but Pekka Rinne instead. After a nice block from Shore, the puck then bounced to a Preds player where it was stolen away by Mattias Janmark. Janmark then sped his way into the Predators zone and blasted the puck glove side on Rinne. He was able to make the save, but fortunately for the Stars, Rinne could not control the puck and it trickled past him into the net.

Third Period:
With the Stars up 2-0, it was clear that they were in charge of the game. The Predators could not crack Khudobin as he was dialed in and was not gonna be denied his shutout. The final frame consisted of the Predators pinning the Stars in their zone and just throwing pucks at Khudobin. The Stars did not get any more insurance goals, but they relied on their goaltender and defense to protect Khudobin. It got even harder when the Stars took a tripping penalty with about two minutes left and now had to face a 6-on-4 cause of the Preds pulling Rinne in favor of another forward. But the Preds were called for interference with about 30 seconds remaining, ending their powerplay and icing the game.

Recap:
Again, the identity of this team is still unknown. If Monty has to yell rather crudely after every practice then that is not a good sign. It just seems that Monty can see the talent on this team and knows they can play better. It can certainly be frustrating to watch such a skilled team play so poorly and then turn around and play like a playoff team. But, if there is one thing that the Stars can consistently rely on is their netminding. Bishop and Khudobin have just been extraordinary this year. If not for their performances, the Stars could possibly be sitting by Chicago or St Louis in the standings. Khudobin’s career-high numbers tonight are a prime example. He actually set the franchise record for most saves in a shutout win with 49. Not Turco, Bishop, Belfour, Turek or Moog could accomplish this in a Stars jersey. The Stars need to start helping their netminders out cause it’s not gonna be like this every night.

What’s Next:
The Stars head back home to take on the Detroit Red Wings.