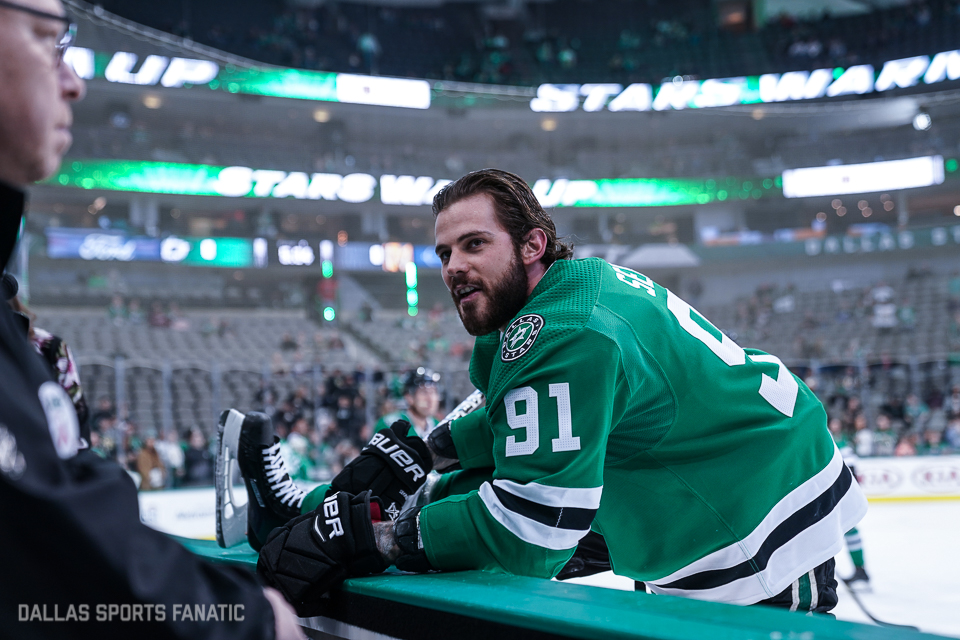 Find out when and how to catch Dallas against Nashville on TV, radio and streaming online

What you should know about Monday’s Game 3 between the Dallas Stars and Nashville Predators:

Party on the Plaza: Begins 3 hours prior to puck drop

Benn there, done that

Captain Jamie Benn potted the club’s lone goal (1-0=1) on Saturday night in Game 2 against Nashville and has points in two consecutive postseason games (1-1=2). Benn recorded his first playoff goal since Game 2 of the 2016 Western Conference Second Round against the St. Louis Blues, when the captain tallied the third postseason multi-point outing (1-1=2) of his NHL career. He has now tallied points in each of his last four postseason road games (1-4=5) dating back to the 2016 WCSR vs. the Blues and has at least one point in 10 of his 11 career postseason games on the road (4-9=13). During the 2018-19 campaign, Benn registered 53 points (27-26=53) in 78 regular-season games. He finished third on Dallas with 27 goals and a 14.3% shooting percentage, while he also ranked third on the team with 53 points and a +14 plus/minus rating. Additionally, he ranked fourth on the squad with 26 assists and finished second on the Stars with eight power play goals. The native of Victoria, B.C. has now made three appearances (2014, 2016, 2019) in the Stanley Cup Playoffs. In 21 career Stanley Cup Playoff games, he has posted 22 points (10-12=22).

Rookie defenseman Miro Heiskanen recorded a goal and an assist (1-1=2) in his Stanley Cup Playoff debut in Game 1 against the Nashville Predators. Heiskanen (19 Years, 266 Days) became one of five rookie defensemen in NHL history to have at least two points in his playoff debut, joining Erik Karlsson (2010), Scott Niedermayer (1993), Jim Pavese (1982) and Ray Bourque (1980). He is one of 22 teenage rookies in NHL history, including teammates Tyler Seguin and Jason Spezza, to have at least two points in his playoff debut. Carolina right wing Andrei Svechnikov potted two goals (2-0=2) in his postseason debut as a teenage rookie on Thursday night in Game 1 of the Eastern Conference First Round against Washington, becoming the second teenage rookie in the 2019 postseason to achieve this feat. Heiskanen is the eighth rookie teenage defenseman in NHL history to record a goal in their first career playoff game and the first to do so since Adam Larsson with New Jersey in Game 2 of the 2012 Eastern Conference Semifinals against Philadelphia. The blueliner is the second teenage rookie in Stars franchise history to have at least two points in his playoff debut. Forward Brian Bellows (18 years, 217 days) was the first, recording one goal and one assist in Game 1 of the 1983 Norris Division Semifinals against Toronto. During the 2018-19 campaign, Heiskanen registered 33 points (12-21=33) in 82 regular-season games in his rookie campaign and was one of three Stars players to appear in all 82 games in 2018-19. Heiskanen became just the 10th rookie in franchise history to skate in every game of his rookie campaign and the second defenseman to do so and is one of only four players to do so during an 82-game season. During the 2018-19 campaign, the blueliner shared 10th among League rookies and ranked fifth among all Stars skaters with 33 points, established a new franchise record for most points (33) by a teenage defenseman in franchise history.

Left wing Mats Zuccarello potted the game-winning goal (1-0=1) in Game 1 of the 2019 Western Conference First Round against the Nashville Predators. He posted his first playoff goal since recording a game-high two points (1-1=2) in Game 3 of the 2017 Eastern Conference Second Round against the Ottawa Senators. Zuccarello netted the third postseason game-winning goal of his NHL career and his first since potting the series-clinching goal in Game 6 of the 2017 Eastern Conference First Round against the Montreal Canadiens. On April 2 vs. the Philadelphia Flyers, he made his return to the lineup after missing 17 regular-season games with a broken arm, tallying an assist (0-1=1) and logging 18:23 time on ice. He made his regular-season debut in a Dallas Stars sweater on Feb. 24 at United Center against the Chicago Blackhawks. The forward registered two points (1-1=2), four shots on goal and a +3 plus/minus rating in 13:35 TOI before leaving the game with an upper body injury. Zuccarello became the fourth player since the Stars franchise relocated to Dallas in 1993 to record two-or-more points in his first game with the club after being acquired via trade in the regular season. He joined Brandon Segal on Feb. 13, 2010 at Phoenix (1-1=2), Brad Richards on Feb. 28, 2008 vs. Chicago (0-5=5) and Randy McKay on March 20, 2002 vs. St. Louis (0-2=2) as the only other players to accomplish this feat. Zuccarello, 31, has posted 40 points (12-28=40) in 48 total regular-season games between the New York Rangers and Dallas this season. He has now made seven appearances (2011, 2013, 2014, 2015, 2016, 2017, 2019) in the Stanley Cup Playoffs. In 62 career Stanley Cup Playoff games, he has posted 32 points (12-20=32).

Watch the first round on FOX Sports Southwest

Play-by-play announcer Josh Bogorad and color analyst Daryl Reaugh will call the action for every game on FOX Sports Southwest. Stars LIVE! will deliver the latest team news before and after every Stars game telecast on the network throughout the seven-game series. Brien Rea and analyst Brent Severyn will anchor FOX Sports Southwest’s pre- and postgame coverage.

FOX Sports Southwest will televise expanded one-hour Stars LIVE! pregame shows and 30-minute Stars Live! postgame shows throughout the first round of the playoffs. For all home games, the shows will be broadcast live from Victory Plaza at the American Airlines Center.

Stanley Cup Playoff games televised on FOX Sports Southwest will stream on the FOX Sports digital platforms. Available to iOS and Android devices, the platforms provide live streaming video of FOX Sports content along with highlights and instant alerts for scores and key plays. Fans can download the mobile app for free from the Apple App Store and Google Play. Streaming on the FOX Sports digital platforms is also available on connected devices, including AppleTV, Android TV, FireTV, Roku and Xbox On