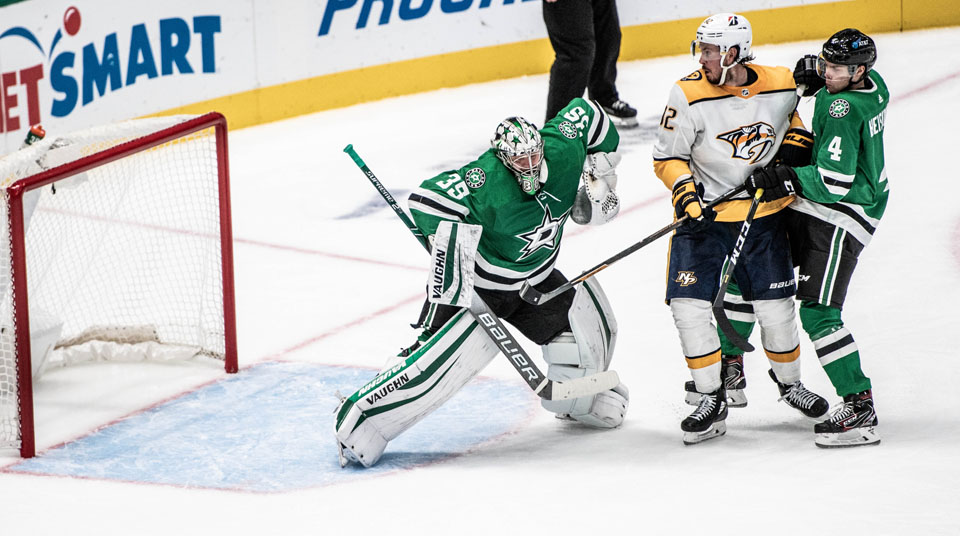 The beat goes on: If Dallas wants to capture the fourth playoff spot in the make the 2021 Stanley Cup Playoffs, the Stars need to turn games in hand into actual points.

It simply didn’t happen this past week.

Despite a promising 4-3 comeback win over the National Hockey League’s best team by points and defending champion Tampa Bay Wednesday, the Stars paired it with a shutout loss to the same group on Monday, along with an overtime loss and 4-1 drubbing against Florida over the weekend.

Finally, Dallas isn’t at the bottom of the league in games played- that now belongs to Boston. After a pair of pauses, Dallas finds itself in contention for the Central’s final postseason berth after Chicago has lost 7 of 10 to crash back to earth.

Here’s a unit-by-unit look as to what’s going wrong.

Dallas pushed across seven goals in the past week, but unfortunately, six of those came in two games. Unsuprisingly, those three-goal efforts were the only games Dallas took points in. Joe Pavelski, Jason Robertson and Roope Hintz (when healthy) have been shining stars, and have received top-six minutes accordingly- and are currently skating on the top line together. The rest of the group, however? Still lacking. Jamie Benn struggled Sunday and hasn’t scored since Mar. 16. This group still desperately needs Tyler Seguin to return.

This team still finds its identity in its back-checking- but struggled this week, allowing 14 goals and a trio of four-goal results. Interestingly, it’s normally been one of the rare consistent entities of this waffling group, and has stayed relatively healthy. The Stars haven’t allowed any crooked numbers in a game this season, but last week was a step in the wrong direction.

The Stars have finally regressed all the way back to the mean with truly average units in both special teams situations. After surging to start the season, it’s been a consistent backwards trend as Dallas catches up in games played. Dallas ranks 11th in the NHL with a 23 percent clip on the man advantage- mostly helped by Joe Pavelski, who still leads the league in power play goals with 11. Dallas has dropped to 20th on the penalty kill. That’s two spots worse than the Buffalo Sabres- who haven’t won a game since Feb. 23.

Rookie Jake Oettinger has been a revelation, and currently ranks 10th among NHL goaltenders who have played in 10 or more games with a 2.34 goals against average. Anton Khudobin doesn’t rank far behind with a 2.53 clip. Oettinger also caught national attention and helped his case to join teammate Jason Robertson in Calder Trophy contention with this highlight-reel save.

Just in case anyone forgot. This was a save Jake Oettinger made tonight#GoStars pic.twitter.com/2BXnGwm6ZD

There’s still plenty of hope among NHL brass and Stars fans that Dallas can catch Chicago and pass Columbus and Nashville. Just look at this recent projection from the The Athletic’s NHL analytics writer Dom Luszczyszyn.

4th in the Central: Dallas, 59 points

However, to this point, Dallas has proven to be an average team playing in a tougher-than-anticipated division.

Stop me if you’ve read this before: the Stars need to start winning this week. They also need to win close games. After Sunday’s loss, Dallas is 0-17 when trailing after two, and just 2-9 in overtime games. The Stars head to Nashville for the first time all season with a pair of road games starting Tuesday and return to Carolina for the first time since January with another weekend back-to-back.