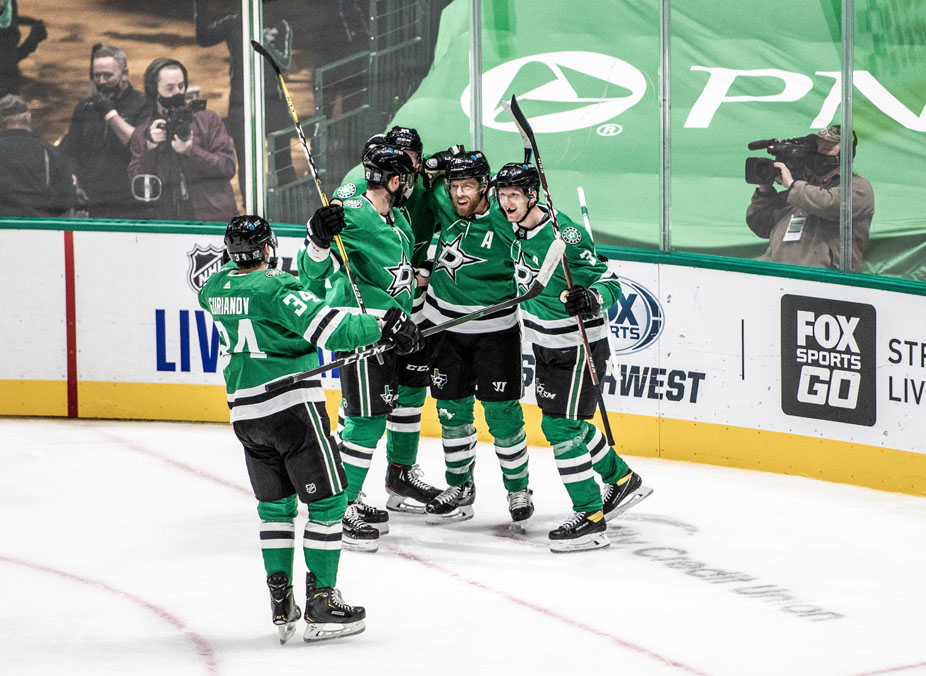 There were many question marks coming into the start of the COVID-shortened 2021 season for the Dallas Stars. How would the team respond coming off a heartbreaking loss in the 2020 Stanley Cup Final? What kind would the repercussions of the deep run have on the team’s health- specifically, injuries to Tyler Seguin and Ben Bishop? What about the new, strange division the team flipped into just days before puck drop?

If the Stars’ first week is any indication, the team’s in great shape. Dallas ran through the first four games of its 2021 schedule with two wins a piece over Nashville and Detroit after the start of its season was delayed to last Friday. It was a whole 131:47 of ice team before the team trailed for the first time. They are the last remaining undefeated team in the NHL.

On the ice, seemingly every unit has been in line. In other circumstances, the lower-body injury Jamie Benn suffered in Friday’s win would’ve been a bigger story- if not for the all-word play of forward Joe Pavelski. He’s racked up a staggering four goals and five assists to keep pace with the league’s top point-getters despite his team having missed nearly two weeks worth of action.

Here’s a look at how the Stars break down unit-by-unit as week two gets going.

No complaints here. Dallas erupted for seven goals in a season-opening romp over Nashville. Since then, the goal scoring has leveled out- but they’re scoring exactly how many the defense needs them to push across. The team is familiar playing this way after its run in the NHL Bubble in Edmonton, where there were several close wins.

Due to injuries, the Stars have been forced to rely on a skeleton crew of AHL talent to fill out the bottom six. Joel L’Esperance is in for Blake Comeau, Tanner Kero- formerly of the Chicago Blackhawks- made his first foray in years at the pro level this week in place of Jamie Been, while Rhett Garnder takes what would be Tyler Seguin’s spot. After playing in only a handful of games in the bubble, Justin Dowling has taken on a much bigger role to start the season. Nick Camaano and Jason Robertson have stepped in for the injured Joel Kiviranta and Roope Hintz, respecitvely. Ty Dellandrea, a first round pick in 2018, scored his first NHL goal Thursday.

There’s stark differences between the forwards that carried the team to the Western Conference title, but the team’s play hasn’t suffered because of it. After a goal Thursday, Denis Gurianov has scored three goals in four games.

Thursday’s win over 7-3 win over Detroit was the most goals Dallas has allowed all season. Prior, opponents had that many in three prior shots at the Stars lethal defense. There have been some discipline questions- all four games have seen plenty of whistles on both sides. In Thursday’s game, Dallas drew the first penalty, but allowed five straight Detroit power plays. Fortunately, the elite penalty kill has neutralized almost every threat.

You could not ask for any more out of the Stars special teams through the first week of the season. After starting a lethal 8 for 12 with the man advantage, the Stars entered Thursday’s game at No. 1 in the NHL at a white-hot 56 percent. The team has had success flipping Pavelski to the Power Play unit so far this season- a refreshing development after going through several cold stretches during the regular season last year.

This one will be interesting to monitor as the season progresses- because Nashville and Detroit both have notably weak power play units.

Anton Khoudobin carried forth the momentum gained in the bubble into the first game of the season in a shutout win in his first start of the year. Since then, he has allowed just three goals in 180 minutes of ice time for a ridiculous 0.99 goals against average.

Jake Oettinger made his first NHL start Thursday night and filled in nicely. While Ben Bishop sits on the shelf recovering from injury, it’s nice to know that Dallas can have a reliable backup to turn to when Khoudobin needs rest. There’s no longer any nerves with the second-year player- after all, he did make his debut on the sport’s highest stage when he came on in relief in the Stanley Cup Finals.

Rick Bowness has pushed all the right buttons in the first four games of his career as the Stars full-time head coach. It will be interesting to see what kind of adjustments he makes to the forward lines as the team continues to deal with injuries.

There’s not a whole lot more Stars fans could’ve asked for through the first four games. The problem is, it’s such a small sample size. The next two weeks will show what the Stars have as they battle their first back-to-back, road trip, and playoff-caliber opponents.

Transactions and Notes: Jamie Benn is listed day-to-day with a lower-body injury. However, he has still particpated in optional team skates, including one Thursday morning and pregame this week.