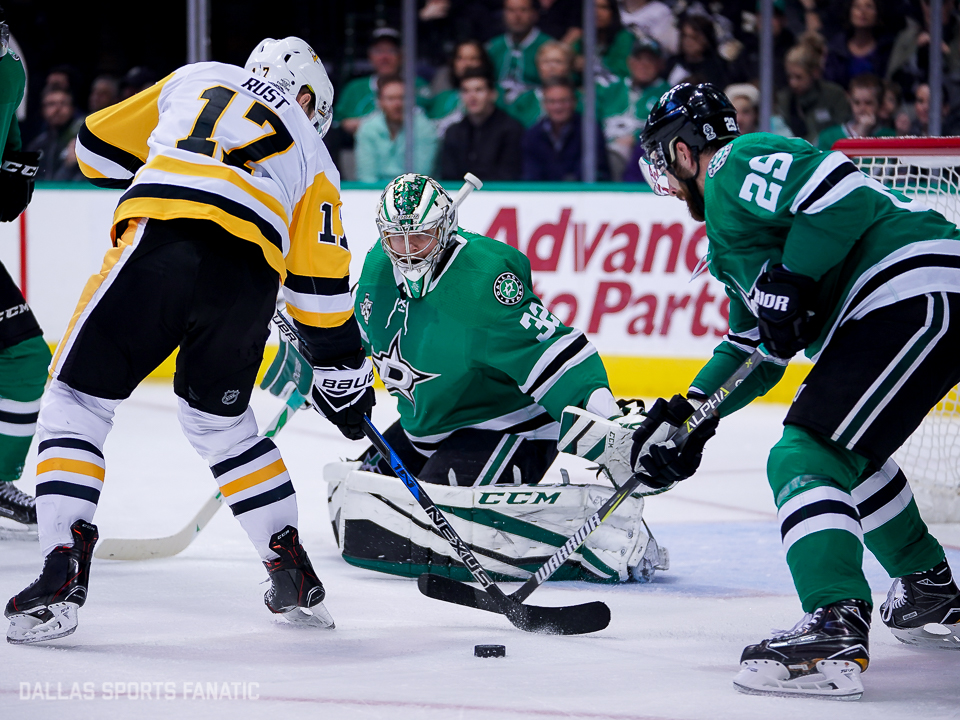 The Dallas Stars avoided a late equalizer from visiting Pittsburgh Penguins to win 4-3 in shootout for fifth straight victory.

Dallas entered the day trailing the St. Louis Blues by one point for third place in the central and needed a win to have an opportunity to climb in the standings.

Their opponent? A rested defending champion coming off a win over the top point-earning team in the NHL.

Pittsburgh looked like that power early, striking for two goals in the middle of the first period to put the Pens up 2-0. One goal off the stick of Riley Sheahan (5), and the other a short-handed breakaway score from Carl Hagelin (6).

However, with just over two minutes to go in the first period, a slap shot goal from Tyler Seguin (29) cut the lead in half and gave Dallas momentum heading into the first intermission.

Then, starting in the second, the blue line for the Stars solidified and held the Pens scoreless for the next two and a half periods.

With the defense playing well, the Stars and Pens stayed scoreless for the entire second period but tied the score at 2-2 with a goal from John Kilngberg (7) just 2:46 into the third.

Just over four minutes later, Dan Hamhuis delivered with a beautiful shift from the Stars attack and a snipe from distance to take the first lead of the night for Dallas. Matt Murray had his stick knocked out of his hand earlier in the rotation and never had a chance to pick it up before Hamhuis stuck.

As the third period continued, Dallas seemed more and more in line for another win, but Pittsburgh took advantage of an extra attacker by leaving their net empty.

With 1:13 left on the clock, the Pens tied it off the third goal of the season from Justin Schultz to make it 3-3 and send it to overtime.

In OT, both sides had their breakaway opportunities, but neither could muster a score, thus sending it into a shootout.

Kari Lehtonen, who played the entire game in net for coach Ken Hitchcock, was called on to face one of the scariest shootout lineups in the sport. Lehtonen delivered with two misses from Pittsburgh and a save against Phil Kessel was able to seal the 4-3 shootout win with only the lone tally from Seguin.

Dallas was outshot 37-36 over the game but won 59% of faceoffs and blocked 22 shots, something the Dallas blue line has improved steadily on all season long.

With a 5-2 St. Louis win over Winnipeg, the Stars remain in the top Wild Card position. But are only one point behind the Blues for third in the Central, and three points from the TOP of the division.

Dallas takes the ice again at home against Vancouver Sunday at 3pm CT.