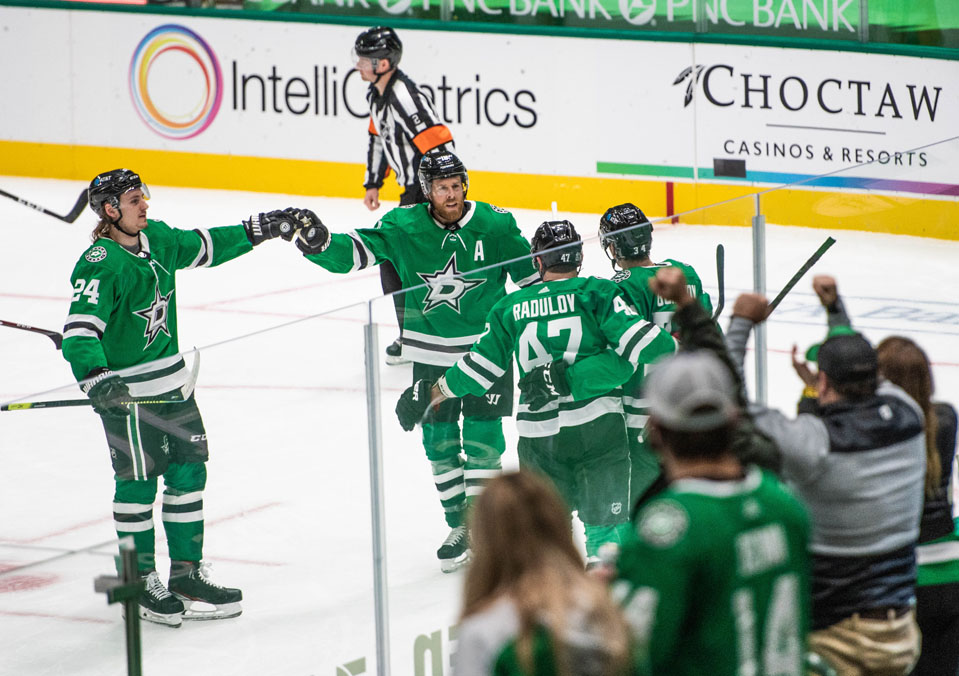 Stars Win Second in a Row Against the Predators

Stars Win Second in a Row Against the Predators

After having to delay their season longer than any other NHL team, Dallas started by beating the Preds 7-0, on January 22nd.  Anton Khudobin earned his 9th shutout of his career, and the game got chippier and chippier as it went on.  Jamie Benn would not start the game Sunday evening, instead, Jason Dickinson took his role on the first line.

Play began evenly matched, going back and forth down the ice, with no real scoring opportunities, until Dallas received a minor penalty.

During the penalty kill, Denis Gurianov made a really nice short handed play behind Nashville’s net, that ended with a shot barely missed wide.  Towards the tail end of the cycle, there was a missed tripping call against the Preds.

As Nashville turned it back the other way, a Mark Pysyk received a second minor penalty, ushering boo’s to rain down from the crowd.  However, Dallas would go on to kill both penalties, as Nashville maintained their momentum.

At the 8:08 mark of the first period, Mark Pysyk received his second penalty in a row, on relatively weak call from the officials, initiating the Preds’ third power play of the game.  After another opportunity slipped by, Stars began regaining momentum and drew a penalty with 5:32 remaining in the first period.

Less than thirty seconds into the Stars’ power play, Denis Gurianov rocketed home a one timer from the top of the circles, to give Dallas a 1-0 lead.  Pavelski and Hintz would get assists on the play.

The period ended 1-0 in favor of Dallas.

The second period began with more of the same, Stars controlling the puck and cycling down low.  Nashville really appeared to be on their heels, and Rocco Grimaldi took a minor penalty, just under five minutes into the period.

With one second remaining on the man advantage, Roope Hintz came screaming down the wing, toe dragged the puck, and shot it through the Nashville defensman’s feet, slipping it five hole between netminder Pekka Rinne.

Both teams would continue to take penalties back and forth until the end of the period, but it wouldn’t be until just under the five minute mark of the period that Filip Forsberg notched the Pred’s first goal against Anton Khudobin.

The period concluded 2-1 in favor of the Stars.  With the amount of puck control and offensive zone time Dallas had, it should have been bigger.

Dallas once again came out hot to start the period.  It took 4:51 into the period until Joe Pavelski scored on a one-timer, assisted by Roope Hintz and John Klingberg, to push the lead to two.

The Preds did not give up, however, and with just over ten minutes remaining in the third period, they brought the lead back down to one, after Mikael Granlund put one past Dobby, assisted by Victor Arvidsson.

With 8:06 remaining in the period John Klingberg took a holding penalty in front of the net during a mad scramble, and it felt like it was poised to tie by the end of regulation, if not by the end of the penalty kill.  The opportunity, however, nothing came to fruition.

Nashville applied some heavy pressure to conclude the game, but the Stars followed through, to win the game 3-2.