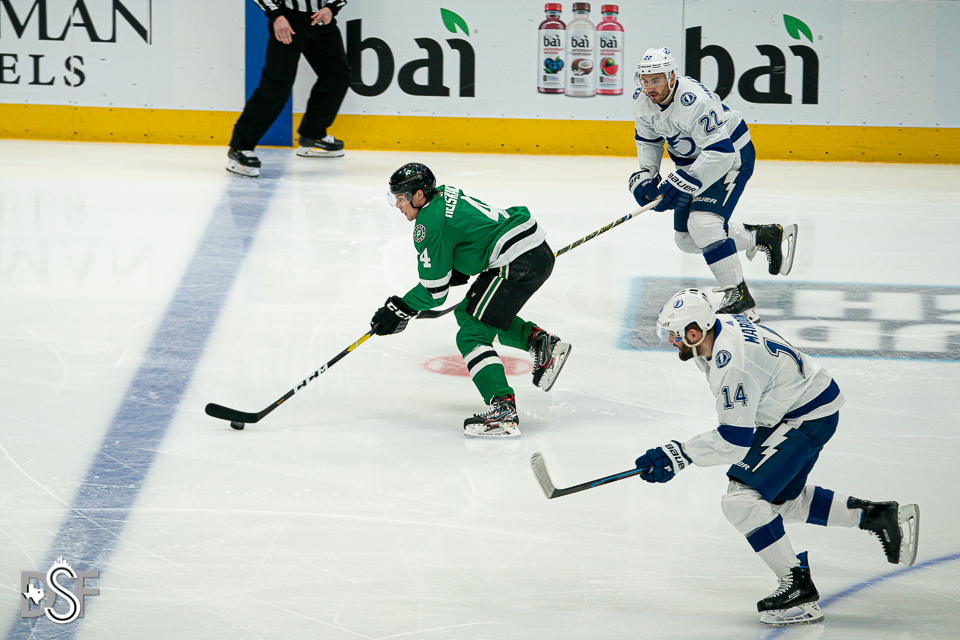 Takeaways From Game Two, as Lightning Even the Series

Takeaways From Game Two, as Lightning Even the Series

The Lightning came into the game hungry for the early lead

Since game one of their series against the New York Islanders, the Tampa Bay Lightning had not been the first team to score, until now.  They have been fighting from behind to win, which is not an easy thing to do, especially in the playoffs.

Tampa took an early lead after netting two power play goals.  After the game Mattias Janmark, who took the first Dallas penalty, said that the team knows they’ve taken too many penalties throughout the duration of these playoffs.  Taking early penalties forced Dallas to chase from behind.

The second goal of the game also came on the power play, when Ondrej Palat netted a goal from Nikita Kucherov and Victor Hedman.  That momentum led Tampa to their third goal of the period, giving them a nice cushion for the rest of the game.

Anton Khudobin stopped 28 of the 31 shots that he faced in the game.  Although he allowed three goals in the first period, he stayed in the game, and did not allow a goal in the second or third periods of the game as his team tried to fight back.

Dallas forward Mattias Janmark scored his first goal of the playoffs, a little over five minutes into the third period, which brought the goal differential to one.

John Klingberg finished the game with assists on both of the Dallas Stars goals, earning him the third star of the game.  Unfortunately, after an icing towards the end of the game, the Stars had a few seconds on the board with the opportunity to get one more shot on net.  Dallas won the puck back to Klingberg, but he whiffed on the shot, and the team did not get another shot on goal, as the Lightning closed the game 3-2.

Dallas hung in there with Tampa and looked strong in play

There have only been a few clean goals in the series, in which the puck didn’t bounce off players on the way to the net for Tampa Bay.

The Lightning haven’t seemed to have any type of real edge on the Stars.  Mikhail Sergachev did have a goal that was disallowed, after Dallas challenged the play, and Blake Coleman ended up being offside.

John Klingberg had one last chance late, but it wouldn’t be enough, as the Lightning closed out the game 3-2, to even the series.