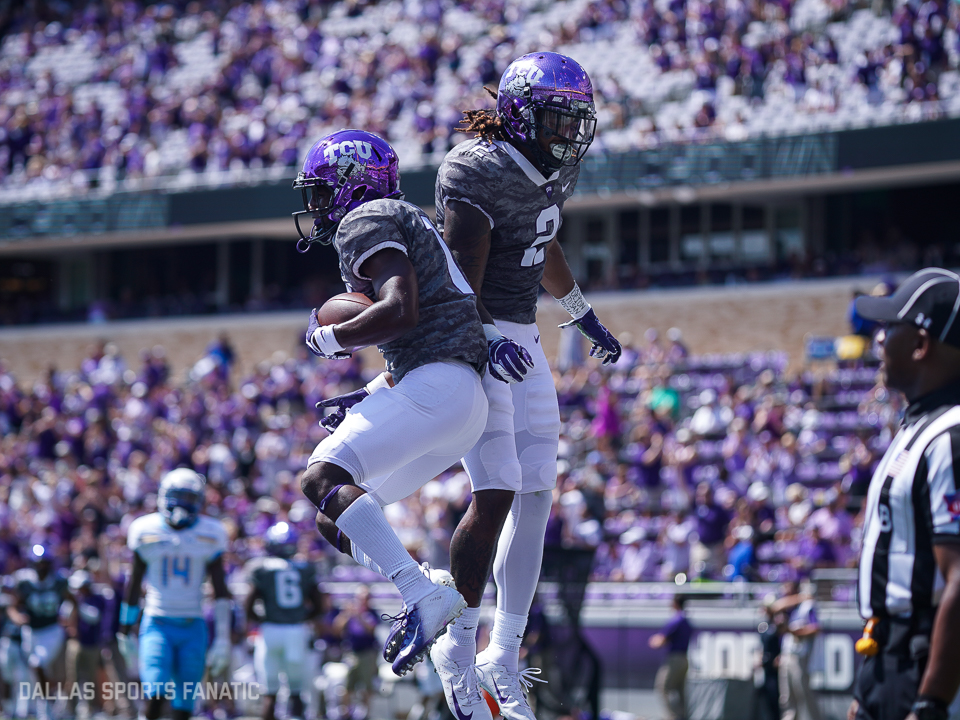 As the summer sun beat down on south Fort Worth, the TCU Horned Frogs beat down the Southern Jaguars 55-7 in their 2018 season opener at Amon G. Carter Stadium Saturday afternoon.

In front of 42,219 purple-decorated fans, the Frogs dominated from the opening kickoff with 17 points in the first quarter and a 38-8 halftime lead. TCU held Southern to just 185 total yards while posting 499 yards of their own in the blow out.

Despite coming against a SWACopponent, some of the glaring offseason question marks were addressed for the Frogs. The offensive line looked stout all game long and controlled the line of scrimmage throughout. Other than a few blown-coverages early in the game, the secondary held downfield and allowed only 101 passing yards.

The most impressive units in the season opener though, belonged to the defensive line and the skills-positions. Ty Summers let the way on the defensive side with 4 tackles and a sack but for much of the game Southern QB John Lampley had little time to find an open receiver. Southern was only able to muster two completions of more than four yards in the contest.

2017 Big 12 Defensive Newcomer of the Year and returning All-Big 12 defensive end Ben Banogu had a quiet afternoon. He recorded a QB hurry in the second quarter that resulted in an interception but was originally called targeting. That call was eventually overturned, and the interception stood.

Former Desoto standout and sophomore starting quarterback Shawn Robinson took the field for the first time in 2018 and led a well-executed drive. Robinson had a natural connection with his top two targets, sophomore wide-out Jalen Reagor and veteran tailback KaVonte Turpin. Until the Horned Frogs moved into the RedZone and the drive stalled, leading to a field goal.

However, the following drive saw no such result. After an overturned interception took away what have been the first Southern turnover, Robinson took it to the house from 36 yards out on a quarterback draw to make it 10-0 Frogs.

TCU didn’t look back after finding stride on offense, scoring on five of their next seven drives on offense as they took the commanding lead. Robinson finishes with 17-24 for 227 total yards and 5 TDs, all of which coming in the first half.

The Frogs put up 17 points in the second half including a 73-yard punt return for a score from the freshman Darius Davis who also had a receiving score in the game as well.

Coach Gary Patterson and the Frogs will travel across the metroplex next Saturday in the Battle for the Iron Skillet against the SMU Mustangs. Kickoff is at 7pm from Gerald Ford Stadium in Dallas.

Keep up with Dallas Sports Fanatic for College Football results and analysis. Also be sure to follow @Dallas_Fanatic and @Kyle_Youmans on Twitter for more updates on TCU Football all season long.