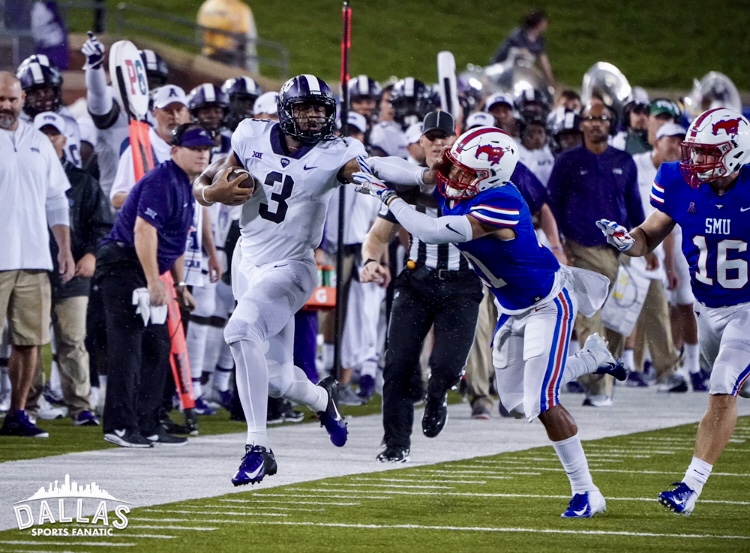 After an almost two hour lightning delay, SMU got their home opener started against the #16 TCU Horned Frogs. The Mustangs had won their previous two home openers over Stephen F. Austin and North Texas.

TCU came out a little sluggish late Friday night, as they could have been looking ahead to Ohio State next week.

After scoring 23 points in the 4th quarter down big to North Texas, Braeden West got the Mustangs off to a quick start Friday taking a rush for 51 yards to the house on the 5th play of the opening drive. That capped a 75 yard drive for the Mustangs. That would be the only touchdown for the Mustangs.

After dominating the first quarter, SMU only managed to take a 9-0 lead into the second. The Horned Frogs got on the board with a 78 yard punt return by KaVontae Turpin with 12:34 left in the second quarter. Turpin now has the school record for most punt returns in TCU history. Turpin would later add a 42 yard touchdown reception.

Horned Frogs took the lead 14-9 midway through the second quarter on a fumble into the end zone by running back Sewo Olonilua, recovered by Jaelan Austin. TCU would never look back, although SMU would close the gap going into halftime by kicking a 49 yard field goal as time expired in the second to make the score 14-12.

After their first offensive possession of the second half stalled, the Horned Frogs got the scoring started defensively, returning a fumble 24 yards to the end zone to take a 21-12 lead.

This was not the game for the quarterbacks as it rained most of the game. Quarterback Ben Hicks struggled to get in rhythm, completing just 15-34 passes for 85 yards. SMU managed to only get 40 yards of total offense in the 2nd half.

TCU finished the game scoring the last 28 points to win 42-12, despite quarterback Shawn Robinson only completing 14-27 passes for 104 yards.

Next up for the Mustangs, a trip to Michigan to take on the Wolverines.