The Legends finished the 2017-18 season with franchise records in nearly every category.  For the seventh straight year, the Legends set new highs in attendance, season tickets, and corporate partners, and earned awards in each category including group sales and over 80% season ticket renewals.  The Legends also finished in the top five finalists for the league’s new Franchise of the Year award.

“We are proud to have accomplished all that we did last season,” commented Legends President and General Manager Malcolm Farmer.  “We have the best fans and partners in sports and they continue to set us up for success in everything we do.  We’re excited to expand our reach and engrain ourselves further in the community.”

The Legends continue to set the bar in premium experience within the G League.  The team has expanded the vision of ownership to create a business “family” that meets regularly both for networking meetings and outside, family fun events.  The experience creates a year-round platform that keeps executive clients engaged both inside and outside of the arena, and forms lasting relationships among the Legends’ members. 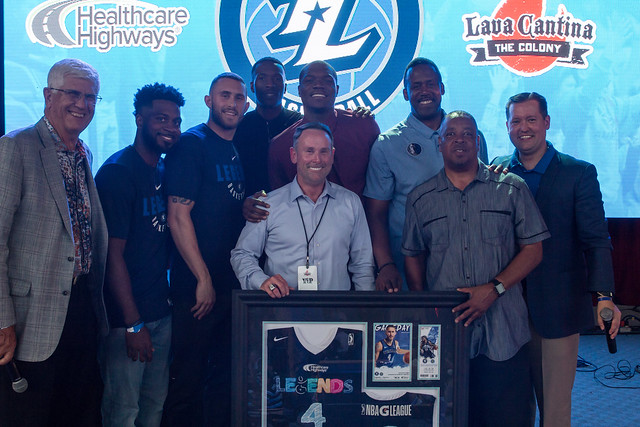 The team celebrated its fifth straight year of hosting 24 unique charity jersey nights, remaining the only team in professional sports to wear a different custom jersey at every home game.  Utilizing the Legends’ 501C3, Texas Legends Care, over 3,000 underprivileged youth were provided with tickets, meals, and transportation to the games.  The Legends also expanded their community outreach efforts, hosting over 130 community events including monthly visits to the Children’s hospital and serving at the Salvation Army.

“The most important piece of our brand is the ability to reach out and help those in need,” said Farmer.  “We strive to be a resource and platform for the true legends in our community and to celebrate their efforts using our presence on the court.”

How does Legends Nation celebrate the most successful season in franchise history? With some @dallasmavs greats, some Legends greats and some poker of course!

In addition to the off-the-court records, Legends’ second-year Head Coach Bob MacKinnon led the team to new accomplishments on-court.  The Legends reached the playoffs for the second time in franchise history, with a record number of wins.  MacKinnon also developed a league-high five NBA Call-Ups and saw two players named to the Team USA roster. Legends forward Jameel Warney joined USA Basketball for two stints, leading the team to an undefeated record, earning a gold medal in the FIBA AmeriCup, MVP of the AmeriCup Tournament, and ultimately being named Team USA’s Male Athlete of the Year.  Second year player Kyle Collinsworth earned a two-way contract with the Mavericks before ultimately signing a three-year deal with the parent club.

“There’s a tough balance in this league between trying to win and trying to develop your guys to NBA Call-Ups,” said MacKinnon.  “To be able to see success in both categories was a tremendous accomplishment for us, and we’re excited to expand on that next season.  We have the best fans in the league and we want to provide them with an exciting product on the court, as well as give them the opportunity to get pictures and autographs after the games with the future of the NBA.”

The Legends enter their ninth season in Frisco looking to raise the bar further both on and off the court.  To be a part of the Legends family call 214-469-0822 or visit www.TexLegends.com!