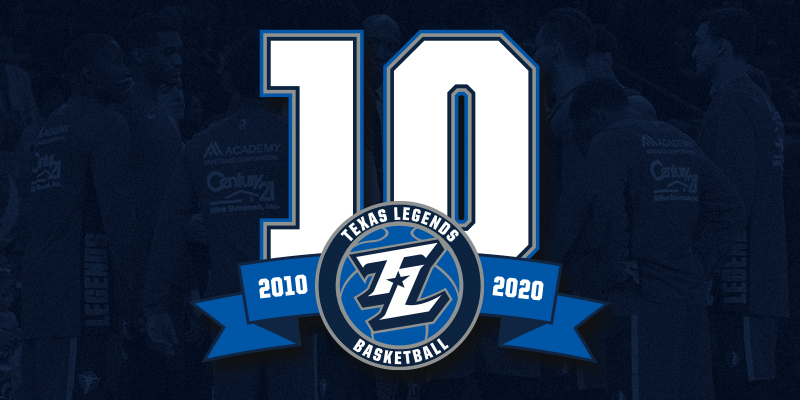 The Texas Legends will be celebrating their tenth season as a franchise with the 2019-20 season, and the team has announced a commemorative 10-year anniversary logo and celebration campaign.

“We are thrilled to be celebrating ten years in Frisco,” said Legends President/General Manager Malcolm Farmer. “Season ten will be special for our fans and we are unveiling this new campaign to both celebrate and thank this community for welcoming us and making this home.”

The 10-year logo (included below) features a jersey-style numerical 10 to commemorate the special anniversary. Donnie Nelson originally bought the team in 2009 and brought them to Frisco, choosing the location carefully for his long-term plans.

The Legends have seen exponential growth for the past ten years in attendance, ticket sales, and fan engagement. The front office attributes that success to the community around them.

“Undoubtedly, we owe it all to the community around us,” Farmer said. “They continue to show support, and we have, inarguably, the best fans in the league. Hopefully we can show them that we appreciate that even more so this coming season.”

The logo stays true to the Legends’ primary logo and colors, following in the steps of their parent team Dallas Mavericks with deep Dallas navy and royal blue. The primary logo, which reflects the team’s ties to the community, rests inside the 10 and is held up by a banner marking the ten-year accomplishment 2010-2020.

“The banner is more than just decoration for us, it marks progress, success, and goals for the future,” said Farmer. “We want to bring a championship to Frisco, but we also want to celebrate 10 years of wins—from attendance records to community awards to on-court NBA Call-Ups and a number of fans celebrating their 10th anniversary with us. We’ve got a lot to celebrate.”

On the court, the Legends have boasted 23 NBA Call-Ups, a historic line-up of coaches, USA Basketball gold medalist MVP/Male Athlete of the Year, 33 former first round draft picks, and two playoff appearances in the past nine years.

The team holds the records for season-long and average attendance, and the Legends front office has taken home awards in every category at the NBA G League’s Sales and Marketing Meetings.

“You hear about home court advantage, but our fans make it a reality,” said Legends Head Coach Bob MacKinnon. “They show up in full force every game and bring that same energy even on some of the road trips. I’ve been all over the country with this league and these are by far the best fans anywhere.”

The team came to Frisco and was welcomed before even having a name, recalls Farmer. “We have fans that literally trusted us enough to buy tickets before we could even tell them what they were really in for. And they’ve been with us ever since.” The team has further plans to include those fans in particular in the historic celebration.

The Legends will aim to set new records and bring a new level to the fan experience in Frisco for the 10th season. “The logo is just the beginning, this tenth year will definitely be memorable,” said Farmer. “We are looking forward to bringing the party to every single game, outing, and networking event we hold.”

The team’s schedule for the 2019-20 season will be announced at a later date. Season tickets are on sale now, for tickets or information call 214-469-0822 or visit www.TexLegends.com.