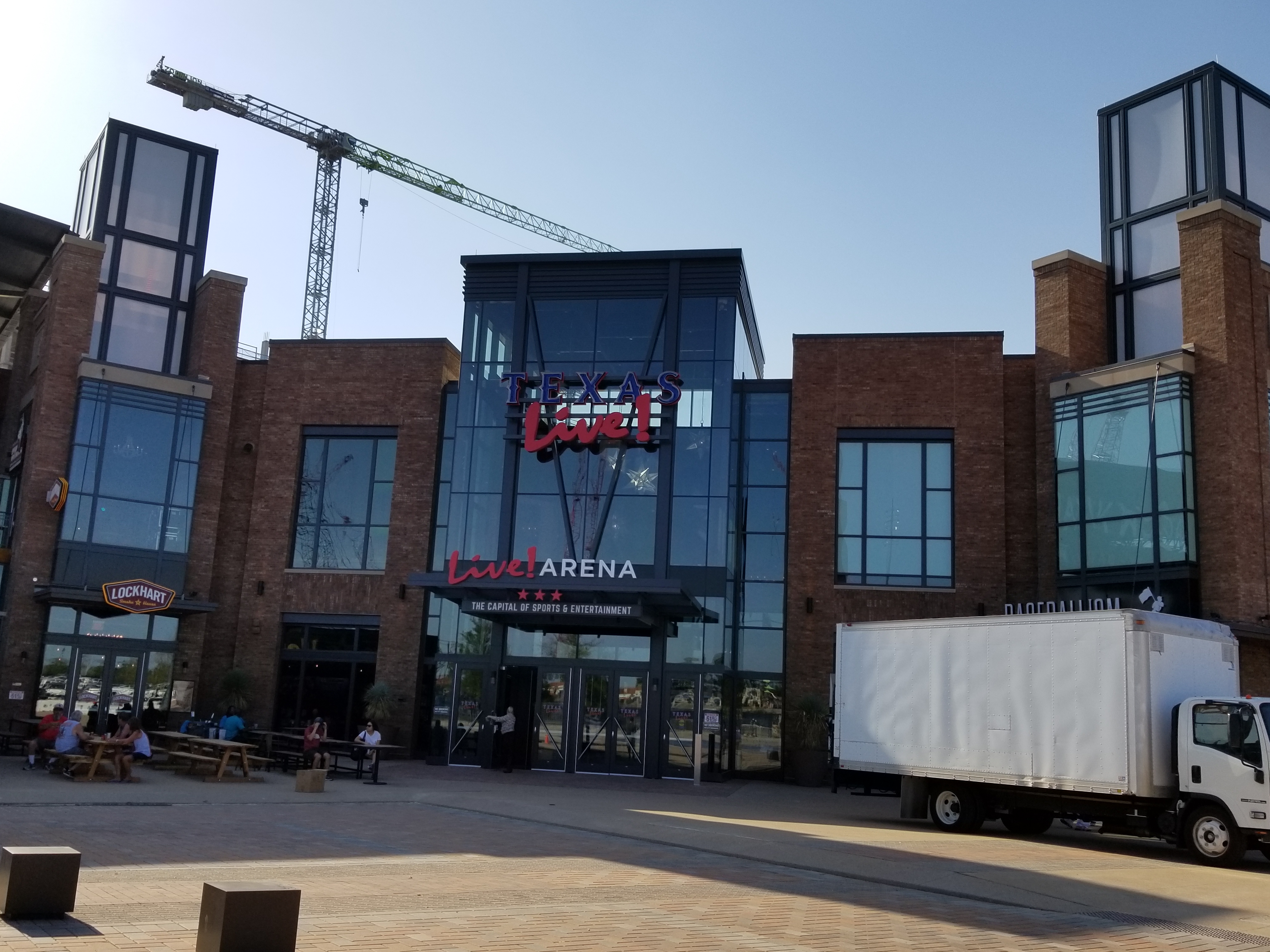 As someone born in 1992, I don’t remember attending any games at the old Arlington Stadium.  Globe Life Park is the only Rangers stadium I know and it’s one that I love dearly.

For everything that’s great about it, it has many flaws when compared to most of the ballparks built after it.  One of the biggest things it has been missing is any sort of flair or place that is cool to go nearby.  For years the only things close to it were Six Flags and Hurricane Harbor.  Then came AT&T Stadium back in 2009.  Even with an epic piece of architecture like Jerry World in the background, there was no reasonably priced or realistic place within walking distance to go check out before or after a game.  Unless you count the Chick-fil-A or Hooters over on Collins Street… which aren’t bad options in their own ways either!

When it was announced back in 2016 that the Rangers would be building the new Globe Life Field, the “entertainment capitol” named Texas Live! that would be included with it was met with some raised eyebrows.  Would anyone even go to this?  Whenever so many people have to drive from far away to attend a game, would they want to stay even later and then drive home after eating/drinking at a restaurant?

While those might still be valid questions, there has been an overwhelming consensus on Texas Live! since it opened August 9th: it’s simply great.

Whether it be attending one of the several packed concerts in the week-plus it has been open or someone just going in to check it out and eat at one of the many restaurant options like my family and I did this weekend, it will be easy to enjoy and appreciate all that the venue has to offer.

One of the more underrated parts about going to a baseball game is checking out batting practice.  The Rangers are typically done with batting practice by the time the gates open to the general public two hours before first pitch, but the visiting team always goes until at least 5:45 or so.  If you can manage to get out there in time, which should be reasonable on a weekend game, check out batting practice and then grab something to eat at Texas Live! before heading back into the park for the game.

Yes, it is possible to enter the ballpark, leave, and then get back in.  Just ask an usher for which ticket taker will be able to scan your ticket so that it is valid for re-entry.

My family and I did this on a Friday afternoon and it was a great experience.  Season ticket holders are able to get into the stadium two and a half hours before gametime, so we did catch the tail end of Rangers batting practice.  We headed over to the home run porch in right field and waited for a lefty to pull one in our direction.  Though a few definitely went into the seats, we were only able to get a ball when Rangers reliever Tony Barnette was friendly enough to toss one up to us upon request.  A ball is a ball though!  At about 5:30, we exited the third base gate and crossed the street to check out Texas Live! for the first time.

Upon initial entry, its immediately apparent that this place is something special.  Once you get into the enormous and open Live! Arena with enormous TV screens and enough seating for hundreds of people, you immediately forget any questions you had about the validity of the idea of a place like this.  As previously mentioned, there are tons of dining options.  My family and I went with Lockhart Barbeque since I had heard so much about its other location in Dallas.

The food was good, the service great, and the peace of mind knowing we were eating at  restaurant but it would have no effect on our ability to get to the game in time was priceless.  I definitely can’t wait to get back and try the other restaurants in the future.

The most exciting thing about the current state of Texas Live! is that you can tell that it’s just the tip of the iceberg when it comes to the upcoming Globe Life Field experience.  The Arlington Backyard concert venue on the southern edge of it sits just 20 or so yards from the gates to the increasingly fast construction of the new ballpark set to open in 2020.  On the west side, the framework of the new hotel “Live! by Loews” that shoots far into the sky.  Based on previous renderings, there’s even more to come directly east of Texas! Live with an extended set of walking paths and construction leading up to the outfield entrance of the new Globe Life Field.

All in all, it’s an incredible addition to the experience of attending a Rangers game (probably Cowboys games as well) for the next several decades.  If you haven’t been out to see it yet, get on it.